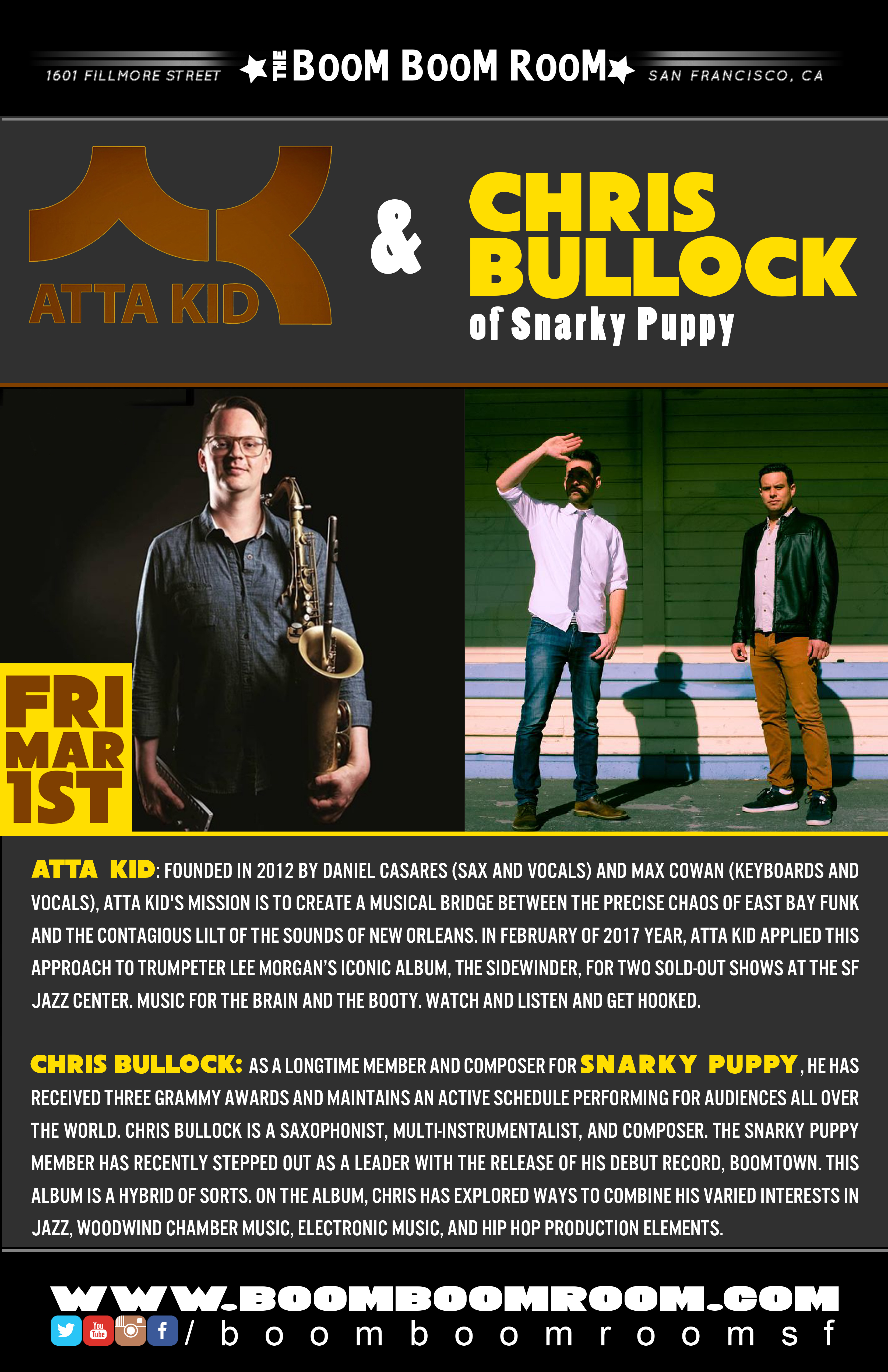 March 1st at @boomboomroomsf we welcome to town @chrismbullock from @snarkypuppy. Gonna be a great night to be at the BBR.
This is a Stellar CO-BILL of All Star Bands with:

East Bay Funk with New Orleans Soul… Band co-led by Max Cowan and Daniel Casares
Founded in 2012 by Daniel Casares (sax and vocals) and Max Cowan (keyboards and vocals), Atta Kid’s mission is to create a musical bridge between the precise chaos of East Bay Funk and the contagious lilt of the sounds of New Orleans. With Joe Bagale (mastermind behind Otis McDonald) on drums and vocals, Ben Misterka (Collectivity) on guitar, Jason Muscat (Tainted Love) on bass and Mike Olmos (Etta James) on trumpet, Atta Kid is a lethal hit-squad of the Bay’s finest. Music for the brain and the booty. Come get hooked on what 1973 sounds like in the future.

Chris is a saxophonist, multi-instrumentalist, and composer. The Snarky Puppy member has recently stepped out as a leader with the release of his debut record, Boomtown. This album is a hybrid of sorts. On the album, Chris has explored ways to combine his varied interests in jazz, woodwind chamber music, electronic music, and hip hop production elements.

As a longtime member and composer for Snarky Puppy, he has received three Grammy awards and maintains an active schedule performing for audiences all over the world.
Chris resides in Brooklyn, NY where he balances his time leading his solo project, playing live shows with a diverse range of artists, and performing for studio sessions. Originally from Asheville, NC, Chris’ musical obsession began as a child with early interests in the Beach Boys, hip-hop cassettes, and learning the clarinet and electric guitar. Over time the saxophone became central to his music making.

As a multi-instrumentalist, Chris has performed and recorded with a variety of artists including David Crosby, Michael McDonald, Lalah Hathaway, Charlie Hunter, Chris Thile, Eric Harland, Phish, and Soulive. In addition to his work as a live musician, Chris is also an educator and clinician.
Chris Bullock plays D’addario reeds, Yamaha Saxophones, and Earthquaker Devices FX pedals. You can find more info at
chrismbullock.com.