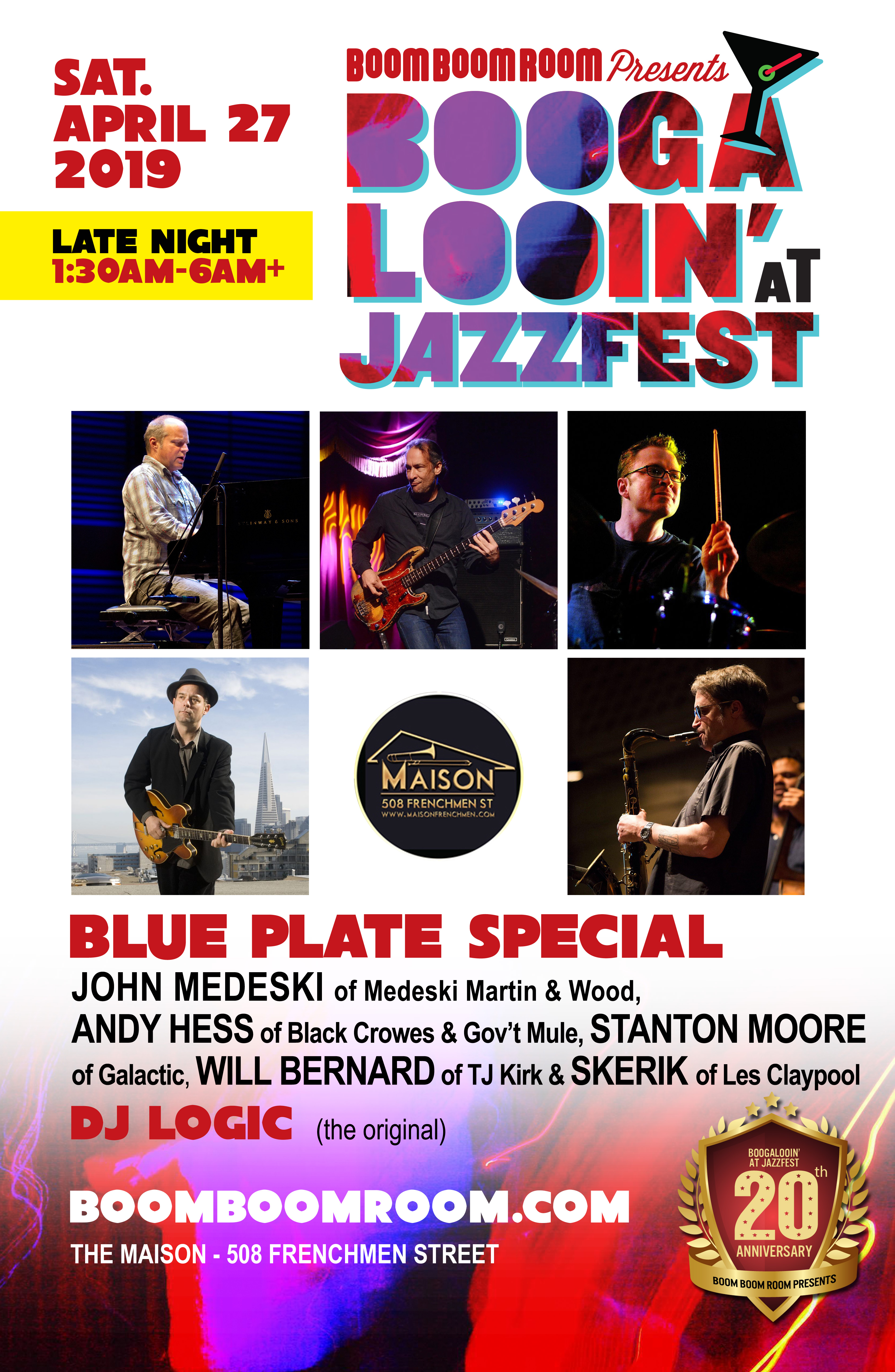 BLUE PLATE SPECIAL
A mind bending formation of sound, featuring master musicians stemming improv from funk, jazz and psychedelic rock roots. This show is ONE NIGHT ONLY – you don’t want to miss this!

Although currently a New Yorker, guitarist Will Bernard‘s unique voice was formed for the most part from the rich cultural roots of the San Francisco Bay Area. Along the way he studied classical music, jazz, played in basements and coliseums, and absorbed the Bay Area Multi-Kultii, the New York downtown edge, and the loose funk of New Orleans. He has performed or recorded with Charlie Hunter, Stanton Moore, Robert Walter, John Medeski, Dr Lonnie Smith, Ben Sidran, Peter Apfelbaum, Jai Uttal, Tom Waits, Dr. John and a lot of other known and unknowns. Will can be seen working in a chameleon-like way to fit into his current habitat. His 2007 CD “Party Hats” as well as his 1997 collaborative project T.J. Kirk’s If Four Was One were both nominated for Grammys, and he is nominated yearly in Downbeat Magazine’s Critics Poll for “Best Rising Star” Guitar Player. Will is a regular fixture at New Orleans Jazz fest, Jam Cruise and other similar events, and has toured extensively in the US and Europe. Currently, Will performs with John Medeski’s Mad Skillet, Peter Apfelbaum’s Sparkler, Frequinox with Stanton Moore and Robert Walter, Pleasure Drones, Brian Charette’s Mighty Grinders, and the Will Bernard Trio and Quartet. Will’s 8th album as a leader, Out and About was released in 2016 on Posi-Tone Records.

Born and raised in New Orleans, Stanton Moore is a dedicated drummer and performer especially connected to the city, its culture and collaborative spirit. Driven and inspired by the thriving music scene of his hometown which includes such greats as Professor Longhair, Doctor John and The Meters, Moore’s name is now mentioned amongst these Big Easy mainstays. In the early ‘90s, Moore helped found the New Orleans-based essential funk band Galactic. Their first album, 1996’s widely acclaimed Coolin’ Off, led to an intense tour schedule of nearly 200 gigs a year for the next ten years. Building on their fan base by adding an esteemed list of all-star collaborations to the six albums that followed, Galactic continues to amass a worldwide audience via recording and touring globally. Moore launched his solo career in 1998 aided by eight-string guitar virtuoso Charlie Hunter and saxophonist Skerik (Les Claypool, John Scofield, Roger Waters). The group recorded All Kooked Out! featuring a handful of local New Orleans musicians as well.

FAMED KEYBOARDIST JOHN MEDESKI IS NOT EASILY CONTAINED TO ASINGLE PROJECT OR GENRE; HE IS CREDITED ON OVER 300 WORKS TO DATE, MOST NOTABLYAS ONE THIRD OF THE GROUNDBREAKING TRIO, MEDESKI MARTIN & WOOD.
Equally comfortable behind a Steinway grand piano, Hammondorgan or any number of vintage keyboards, Medeski is a highly sought afterimproviser and band leader whose projects range from work with John Zorn, TheWord (Robert Randolph, North Mississippi Allstars), Phil Lesh, Don Was, JohnScofield, Coheed & Cambria, Susana Baca, Sean Lennon, Marc Ribot,Irma Thomas, Blind Boys of Alabama, Dirty Dozen Brass Band and many more.Classically trained, Medeski grew up in Ft.Lauderdale, FL where as a teenagerhe played with Jaco Pastorius before heading north to attend the New England Conservatory. Hereleased his first solo piano record, A Different Time, on Sony’sOkeh Records in 2013, and current projects include a new album in the workswith his band MadSkillet (Terrence Higgins, Kirk Joseph, Will Bernard), andHUDSON (a collaboration with Jack DeJohnette, John Scofield & LarryGrenadier), plus a documentary on Medeski Martin & Wood.

Andy Hess is an American bassist and former member of Gov’tMule, having joined the band in 2003. Previously, he was The Black Crowes’bassist from February 2001 until their hiatus early the following year.
Music groups: Gov’t Mule (2003– 2008), The Black Crowes(2001– 2002)

Skerik is an American saxophonist from Seattle, Washington. Performing on the tenor and baritone saxophone, often with electronics and loops, Skerik is a pioneer in a playing style that has been dubbed saxophonics. He is a founding member of Critters Buggin, Garage a Trois and Skerik’s Syncopated Taint Septet. He is also an original member of both Les Claypool’s Fancy Band and Frog Brigade and has toured with and played with numerous others in a variety of genres.

at THE MAISON in NEW ORLEANS