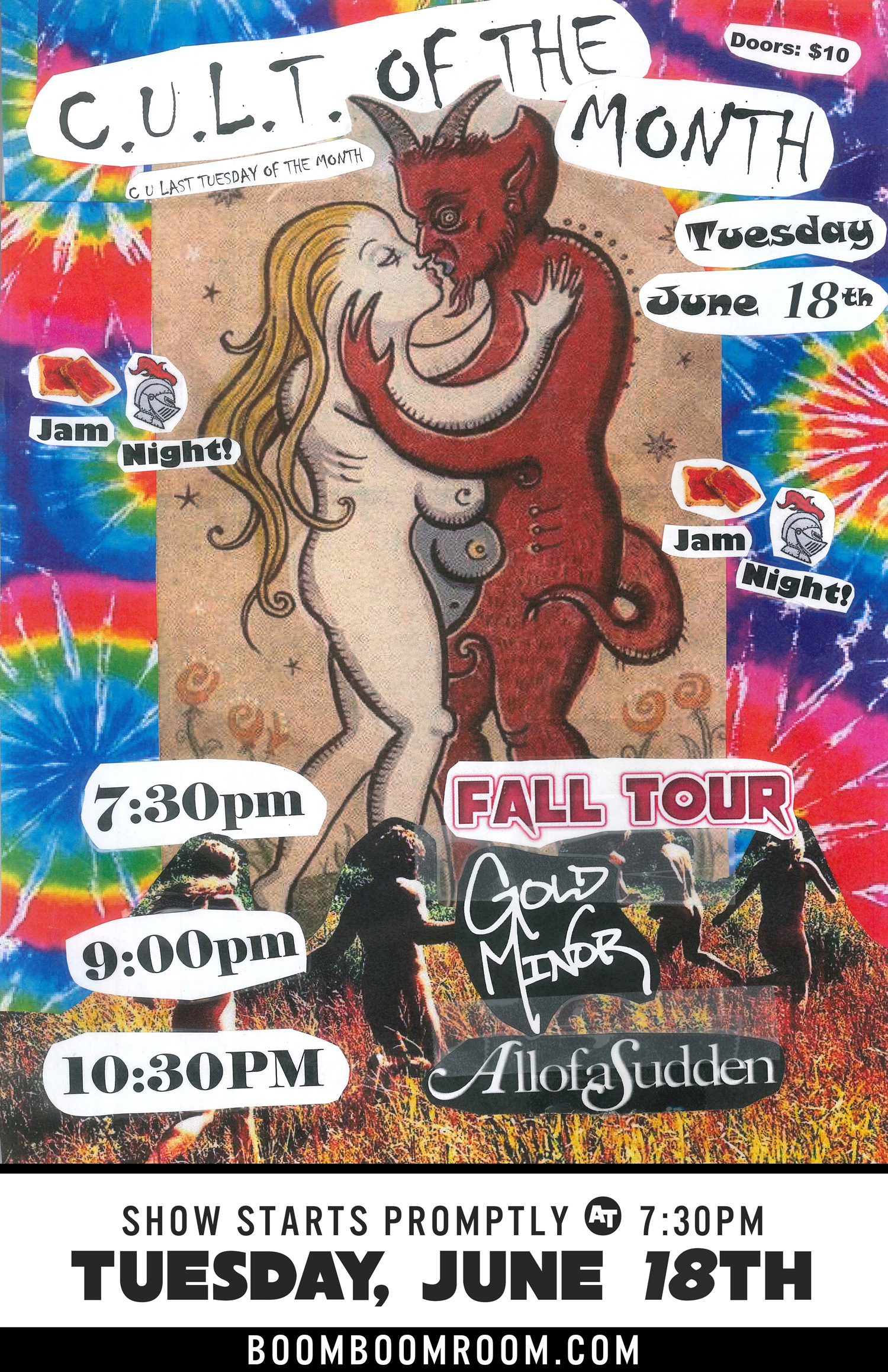 The only JAM NIGHT in San Francisco. On the Last Tuesdays of Every Month…

This is the Tuesday evening residency for AOS and our friends, Fall Tour, a collaboration between the former band Koobi Fora with the Humidors. Our two bands will be joined by a different special guest each month.
This is the new Monthly Rock’n Soul Jam Residency on Last Tuesday of Every Month…

Please join our C.U.L.T. Of The Month residency!  We want to C U Last Tuesday of the month for some local bands and high energy jams that will shake you loose of your weekday blues and provide the necessary disruption you crave.
Celebrate your inner demons and come party on a Tuesday with some primo San Francisco jam bands, plenty of delicious drinks, and lots of room on the dance floor to meet that special-someone you’ve been missing.

C.U.L.T of The Month welcomes everyone to boogie down early!
We are starting every C.U.L.T Tuesday at 7:30pm!
No more waiting around to get ripped on grooves – come early and enjoy happy hour the Boom Boom way: with a shot and a beer and a funky good night of premier LIVE MUSIC!!!

Fall Tour:
“Fall Tour is a jam band based in San Francisco comprised of players from The Humidors and Juggling Suns and featuring Jackson Haddad on lead guitar.  Fall Tour plays original music and explores the communion between audience and band while delivering their fiery sermons of jam-based improvisational music.  Their eclectic songs are frequently jammed out with hints of prog, funk, jazz, folk, and rock, while providing increasingly more confident vocal harmonies atop shredding guitar and masterful organ firepower.”

After relocating to the Bay Area in 2006, the pair spent several years performing under the name Team Candy, and The First Church of the Sacred Silversexual all the while writing, recording and searching for the right musical recipe. Jesse Ray Smith had ventured from Marin to San Francisco with The Pheromones, acquired ‘Gulch Alley Studios’, and co-founded acclaimed blues-soul rock outfit The Bad Jones. Simultaneously, Seattle rock theater drummer John Hollis (Hedwig, Ian Moore, Gerald Collier, Burning Opera SF) headed south from the soggy, forested Northwest music scene after a residency in SF with The Burning Opera. With the addition of Hollis and Smith at Gulch Alley Studios, Gold Minor found it’s completion, it’s home and its form.
And so the story begins…A series of recording/filming endeavors, touring dates and long bizarre weekends followed. The debut album Bone Flowers  is set to release in the following months with more travel and adventure to come.  Join us at the next event~

AllofaSudden
AllofaSudden
Born out of the American rock tradition, Allofasudden has grown into a powerful band both live and on record, igniting clubs throughout California. This 4 man (sometimes with a 5th) band absolutely slays with their rich vocal harmonies and pleasing cover selections.  You will surely find yourself dancing to their tight pocket and nasty guitar riffs.
“really fine musicianship, a knack for prime barroom ditties, and a swerving demeanor that encompasses pleasing bits of reggae, country and jazz into what is always clearly rock ‘n’ roll” -Dennis Cook, editor Jambase.com