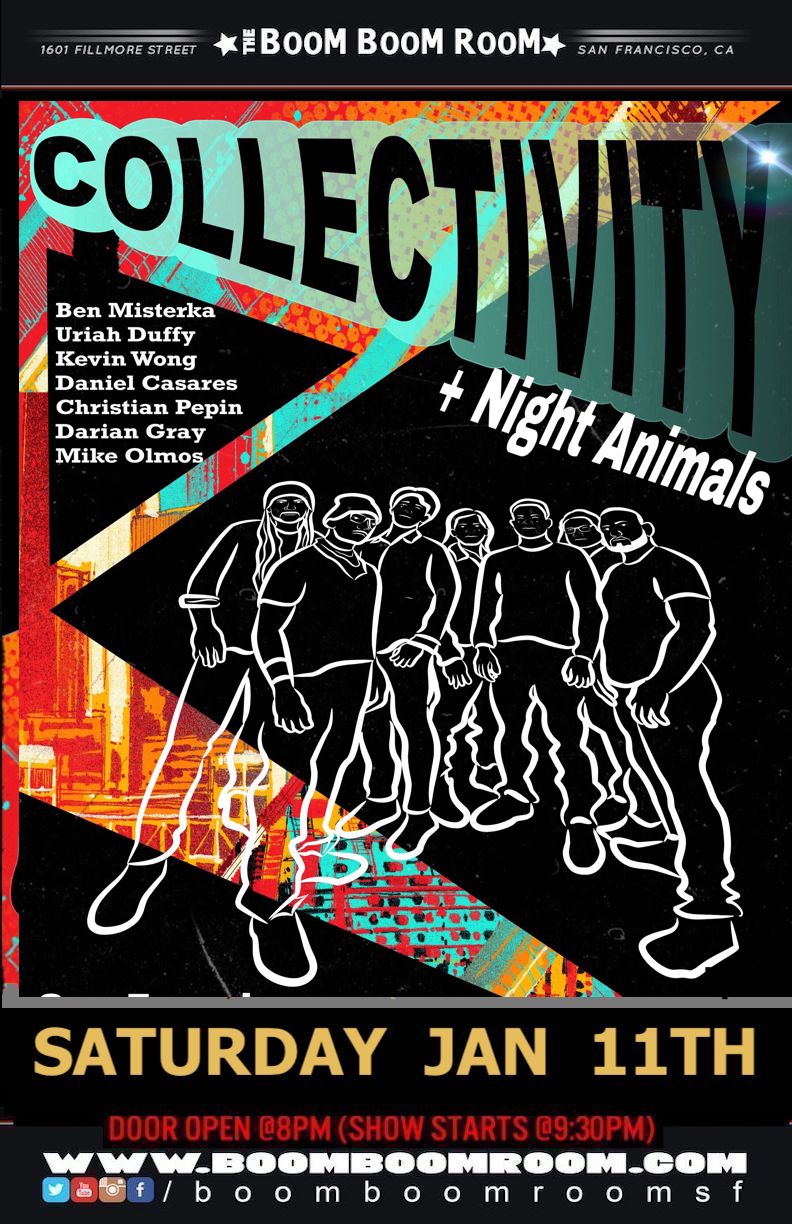 All star 7 piece, jazz/funk and psychedelic soul unit featuring some of the Bay Area’s finest musicians. With their high energy stage performances, this band has recently opened for Larry Graham at Shanghai Arena, performed in Mongolia at Ulanchabo Stadium, and has been turning heads touring throughout Asia and the States.

Freshly transplanted to San Francisco Bay Area from Shanghai, China and originally hailing from Virginia, Ben Misterka’s story is anything but ordinary.  Spending the past 6 years based in Shanghai, he is well known as a top call session and touring guitarist, regularly performing at arenas, major festivals, and intimate clubs alike, with leading pop artists, internationally renowned touring acts, and his original project “Collectivity”.  He is quickly turning heads and making an impact across California and beyond.
In 2017 Collectivity opened for Larry Graham at Shanghai Arena, performed at Ulanchabo World Music Festival in Mongolia, Headlined Candy Mountain Festival in Chengdu, and has recorded and produced a video album of original music.

Misterka has toured through China, Japan, and the USA, playing with many acclaimed artists as a sideman, and his own groups.  He has performed and/or worked with; Alex Han, Morris Hayes, The Voice of China, Tia Ray, Glen David Andrews, Tan Wei Wei(谭维维), Leah Dou (窦靖童), Yu Quan (羽 泉), Anhayla, Kimberly Nichole, opened for Erykah Badu, Larry Graham, and many others.  He has studied with Wayne Krantz, Fred Hersch, and Doug Richards.

and:
NIGHT ANIMALS:
Night Animals is a six-piece funk band from San Francisco, CA dedicated to the mission of transforming stages into full-blown celebrations of the night. Featuring Jay Costa (guitar/vocals), Kevin Coleman (drums), Matt Kane (saxophone), Will Skinner (trumpet/vocals), Jason Tharp (bass), and Derek Wetzel (keys/vocals), live performance is the pinnacle of Night Animals’ music, combining high-energy compositions with a love of improvisation and an undying commitment to stage performance. With seductive vocals, serpentine horn lines, hypnotic rhythms, and hook-laden guitar licks all conspiring to put you under their spell, by the end of the night you may well find yourself howling at the moon.