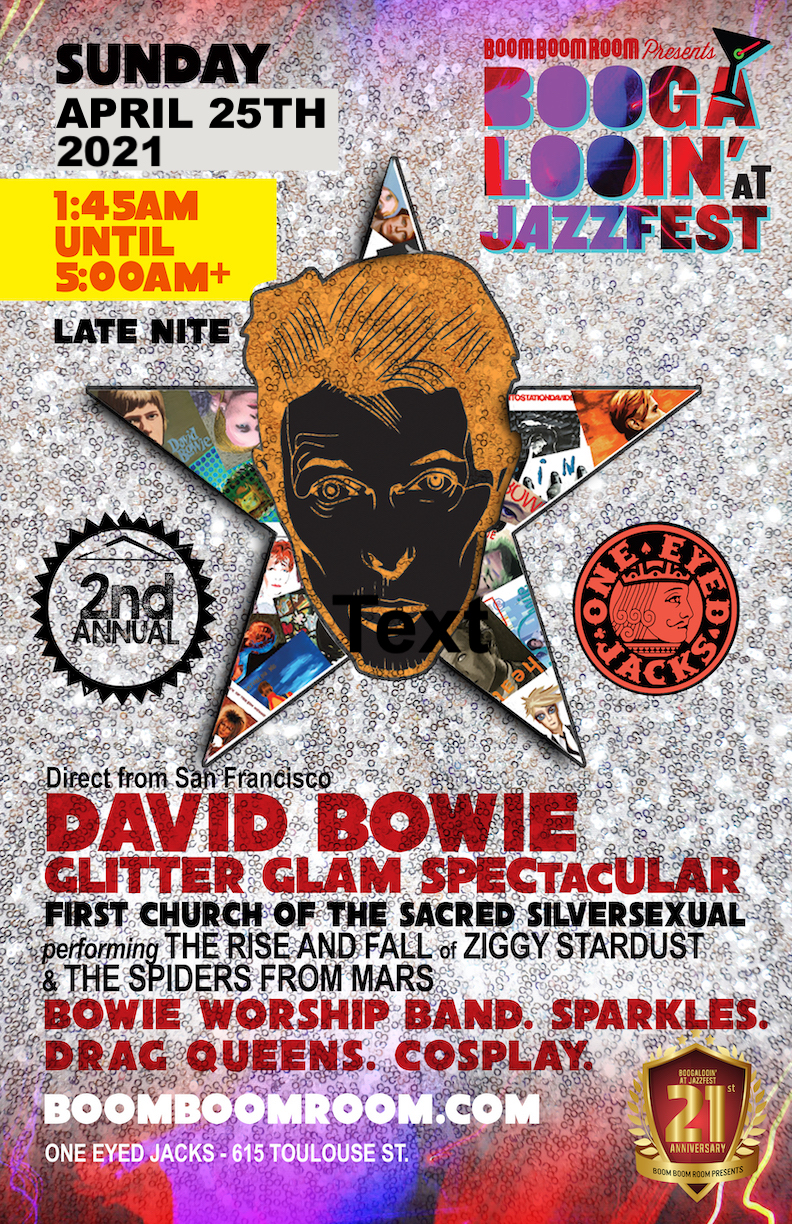 featuring:
THE FIRST CHURCH OF THE SACRED SILVERSEXUAL
(~The world’s only Bowie Worship Band ~)
performing:
‘The Rise and Fall of Ziggy Stardust and the Spiders from Mars’

“Raucous and roiling with glam-rock glee, its an orgasmic sensation of all things David Bowie wrapped in tinfoil and pumped full of sparkly gospel soul.  The boisterous crew of theatrical musicians and singers packs onto stages and blows the Bowie horn: All ye who enter here, know the Thin White Duke’s (or Ziggy Stardust’s, or Aladdin Sane’s) name.  The oft-adoring crowd, with lyrics sheets in hand, responds in time.” (SFBG 10/15/13)

It has been 5 years since His Bowieness forever abandoned corporeal form and became Pure Stardust. We honor his Legacy with a full Night of Bowie Worship!

The First Church of the Sacred Silversexual is the World’s Only David Bowie-based religion.  Led by Reverent Father Lysol Tony-Romeo and a 8-piece Worship Band, they hold church services where Ziggy is the focal point, not Jesus, so they play Bowie songs.  No true tribute to the Thin White Duke would be complete with a big fuck-all stage show, so the Silversexuals are joined by a cast of burlesque performers and drag queens as they build a theatrical spectacle on top of the timeless classics and endless B-sides of Bowie’s impossibly long career.
The First Church debuted in 2011, drawing 225 people to their first show.  In 2013 they won a SF Bay Guardian Best of the Bay Editors’ Pick for Best Bawdy Bowie Worship.  For the past 7 years they’ve sold out annual Bowie Birthday shows at The Chapel in SF.  Having grown into an SF institution for its reputation as a unique, “only in San Francisco” experience, the Silversexuals have made pilgrimages to Seattle, Portland and Los Angeles, but this is the second time they’re bringing their message that “Bowie Loves You” east of the Mississippi!

But that’s not all! A proper religious tribute to Bowie wouldn’t be complete without a Big Spectacular Stage Show, and we’ve got that and more! We will be welcoming some of SF & NEW ORLEANS’ favorite drag queens and burlesque stars to the stage as the Spirit of Ziggy flows throughout the performance!

*****
Don’t Miss This!  It’s Truly an embodiment of the Bowie Experience and the best Bowie Worship next to seeing Bowie in concert!

THIS SHOW is EPIC!

Boom Boom Room Presents *DAVID BOWIE ‘GLITTER GLAM’ SPECTACULAR *, featuring THE FIRST CHURCH OF THE SACRED SILVERSEXUAL (The world’s only Bowie Worship Band), on Sunday night, April 25th 2021 in New Orleans.
This is a Late Night show at One Eyed Jacks in New Orleans, that starts at 1:45am and goes until dawn at 5:00am (technically starts 1:45am Monday). The band will be performing Bowie’s seminal album, ‘The Rise and Fall of Ziggy Stardust and the Spiders from Mars’ (from cover to cover, front to back).

This is the greatest David Bowie tribute experience you will ever witness. Along with this exceptional band of star musicians and singers, the “Glitter Glam Spectacular” has an outrageous stage show of drag queens and burlesque performers. Replete with stellar props, crazy costumery, glittery make-up and animal instincts, the drag queens and burlesque performers add a simply outrageous, avant garde (and, yes… naked, fleshy bits are everywhere), glam rock, “no holds barred” sexy, cosmic interprative theatre circus element to this spectacle of a spectacular show.

***** Dress in your wigs, costumes, spandex, glitter face paint and your 1970’s era “Starman” and “Ziggy” scene’s best, as you will be transported back in time and into the freaky, intergalactic world of the “Sacred Silversexual”, David Bowie. *****
“Ohhh… WHAM! BAM! THANK YOU M’AM!”