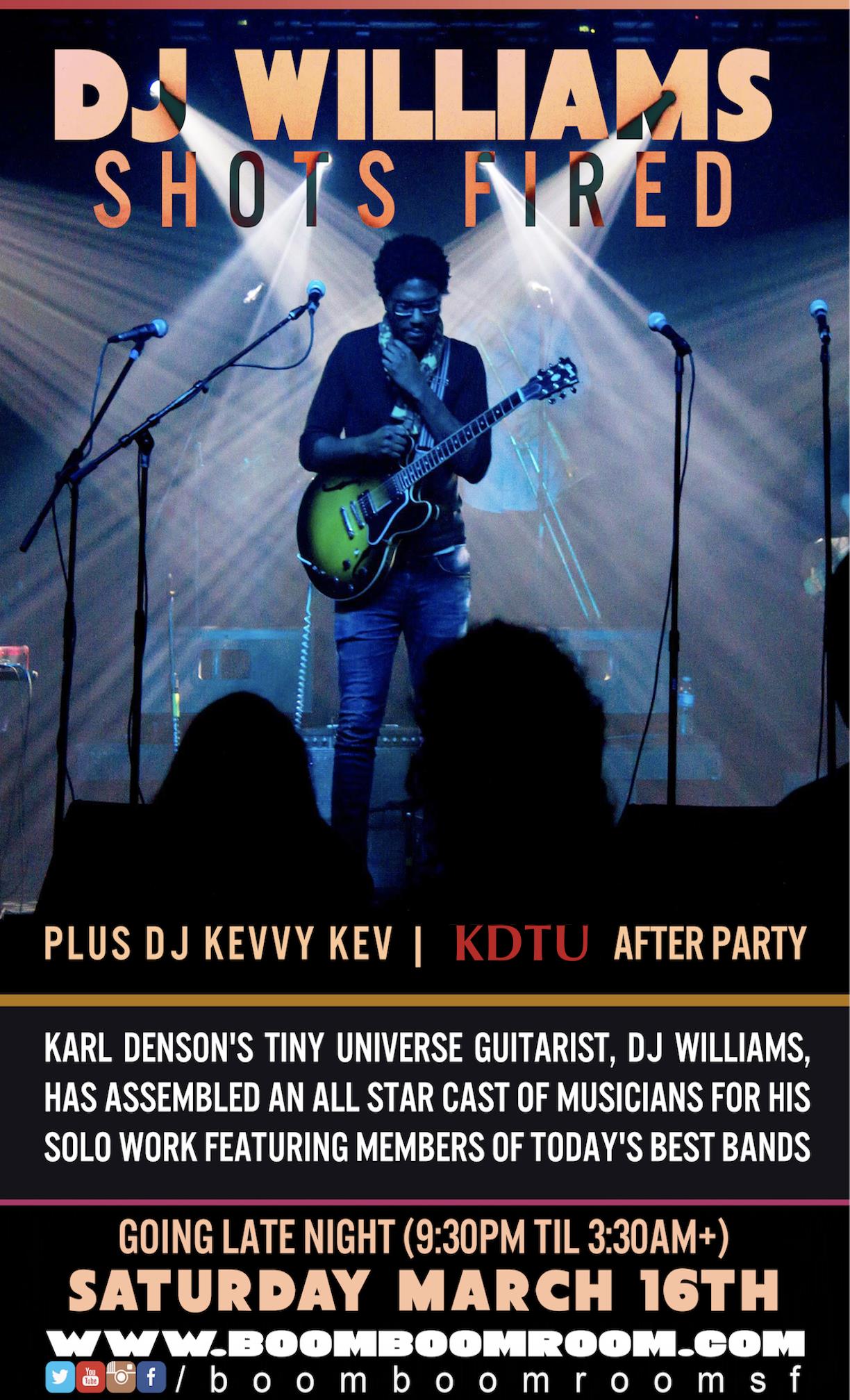 (9:30PM) opens the night
Get to the Boom, Boom Room starting at 9pm as we have the up and coming Soul, Rnb, Electro-Funk new music bad-azz band opening the night…

GET YOUR GROOVE ON… The Party is Jumpin’ All Night…

Exclusive San Francisco Show – One Night Only !
It’s gonna be Freakin’ electrifying and Super-Funky,,,
DON’T MISS THIS ONE FOLKS!

Bringing together a roster of Soul-Jazz and Boogaloo, modern day music legends… of Greyboy Allstars, Karl Denson’s Tiny Universe and Slightly Stoopid members in this breakout sensation, DJ WILLIAMS and his krewe are set to bring it straight at ya with the nastiest grooves at BooM BooM RooM !

(9:30PM) opens the night
Get to the Boom, Boom Room starting at 9pm as we have the up and coming Soul, Rnb, Electro-Funk new music bad-azz band opening the night…

MORE about SHOTS FIRED:
Guitarist D.J. Williams, who is known for his work with Karl Denson’s Tiny Universe, has announced a new LP with his Shots Fired project entitled Live From Over Where.

Williams is on a special tour in support of Live From Over Where, with an evolving lineup of musicians who contributed to the album.

First things first…DJ Williams is not a DJ. But he is laying down wicked guitar licks that any DJ would be salivating to sample. When he’s not hanging out deep in the funk pocket with Karl Denson’s Tiny Universe, he is leading his smoldering new project – DJ Williams’ Shots Fired – into bold frontiers. Presenting innovative interpretations of classic songs (his reimagining of a couple Nirvana hits will blow your lid) along with cutting edge originals, this band kicks down the flood gates with relentless energy. They are back at Boom Boom Room for a throwdown sure to ignite the passions of one and all.

Shots Fired plunges into a fluid, dance-inducing fusion of funk, rock, soul and jazz.
Williams is joined by an amalgamation of Denver’s hottest stage assassins.
Todd Stoops (Electric Beethoven, formerly of Kung Fu) is a true keyboard genius who always seems to be defying logic. Max MacVeety makes is easy to see why he is one of the most in-demand drummers among hip hop artists such as Lyrics Born. Last but not least is an acrobatic, funk-tastic bassist, Derrick Wong plus guest horns to round out the line up. With an emphasis on captivating melodies, transcendent songwriting, and an extremely diverse musical palette, this band is pushing boundaries into the stratosphere.