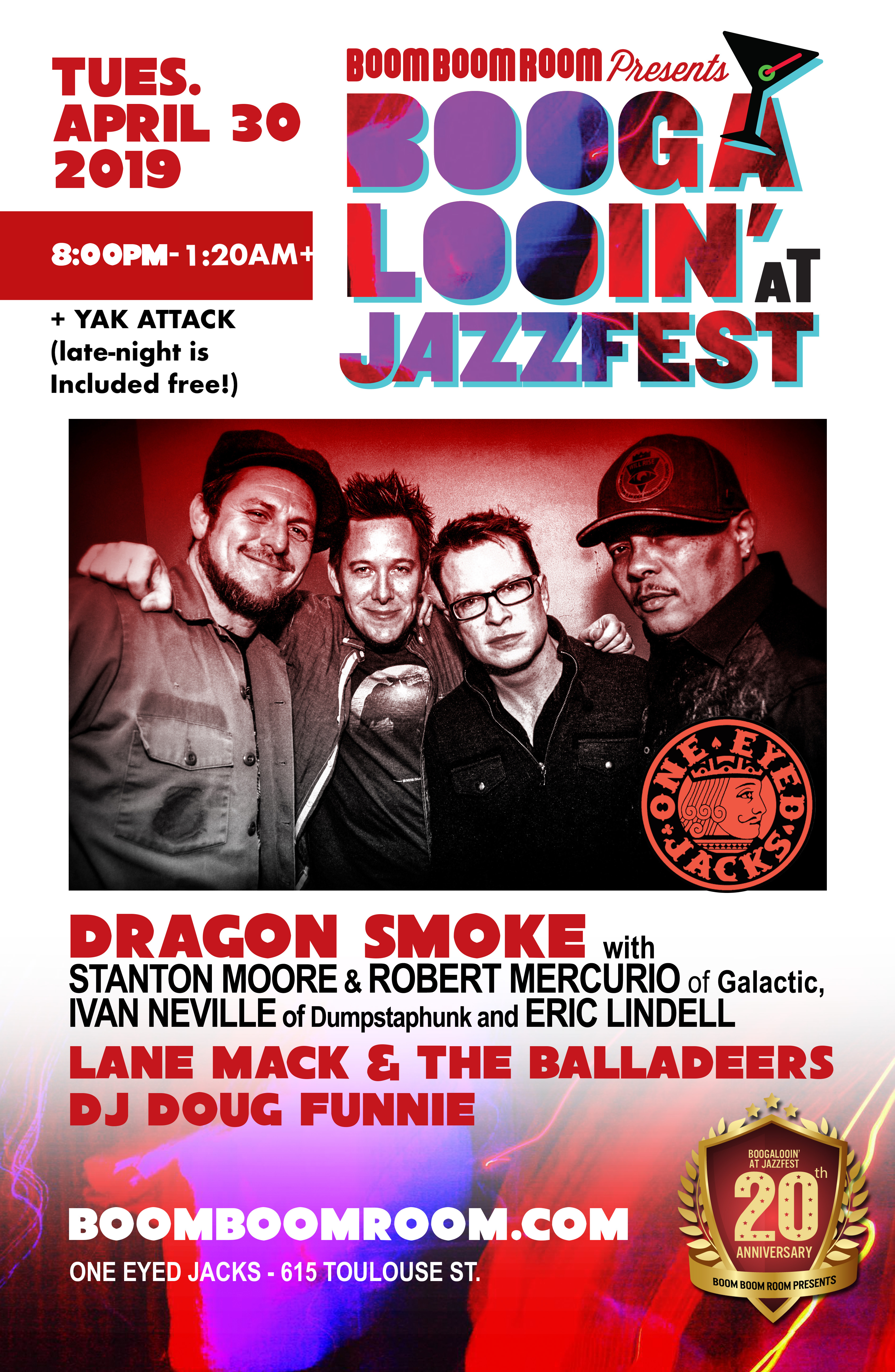 with special guests:
* LANE MACK and THE BALLADEERS *

This BooM BooM RooM Presents show, *DRAGON SMOKE*, has sold-out every show to date…every year in a row in New Orleans during JazzFest and also in San Francisco for more than 16 years!
DRAGON SMOKE has crowds and lines down the street (all night long) each and every night they perform. This band is super hot!

So, don’t miss this one! *DRAGON SMOKE* performs at ONE EYED JACKS on Tuesday, April 30th 2019 bringing its stellar style of dirty-south funk and new New Orleans R&B Rock in what is a kick-azz rockin’ show from start to finish!
The music of DRAGON SMOKE truly represents the New Orleans Funk, R&B and Soul tradition. It’s a phenomenal band. Don’t miss this one!

LANE MACK and THE BALLADEERS

Born & Raised in Cajun Country, Lane Mack knows a thing or two about letting the good times Rock and Roll! From fronting a garage rock band at the young age of seventeen Lane Mack has since gone on to grace the stage with numerous national recording artists such as Robert Randolph, Marc Broussard, and Royal Teeth as well as co-founding the band Sons of VooDoo along with his brother. Lane Mack is always challenging his versatility, from playing guitar with Lafayette Louisiana folk artist Sean Bruce one night to switching gears effortlessly to soul music with season 5 finalist of The Voice Ray Boudreaux. Lane Mack owns the stage with masterful guitar licks and a vocal range that surpasses many. After years of playing and writing Lane has finally stepped out on his own to show the world a brew he’s been perfecting for years.

Growing up in New Orleans and still residing in the area, Jake Smith knows his roots and influences. This 31-year-old has reclaimed his independence with vigor, selling out local shows at the House of Blues, playing shows with Grammy-award winning artists and landing a main stage gig at his hometown’s annual JazzFest just before Better Than Ezra and Dave Matthews Band. In 2015 Jake Smith opened up a recording studio in his new town of Lafayette, La.
“A lot of people use the past to hold onto something that is holding them back,” he says. “I didn’t want to be that guy who blamed someone else for not doing what he needed to do. I’ve realized that everyone comes from somewhere and has been through something. But people can change … it’s how you come out of those times.”