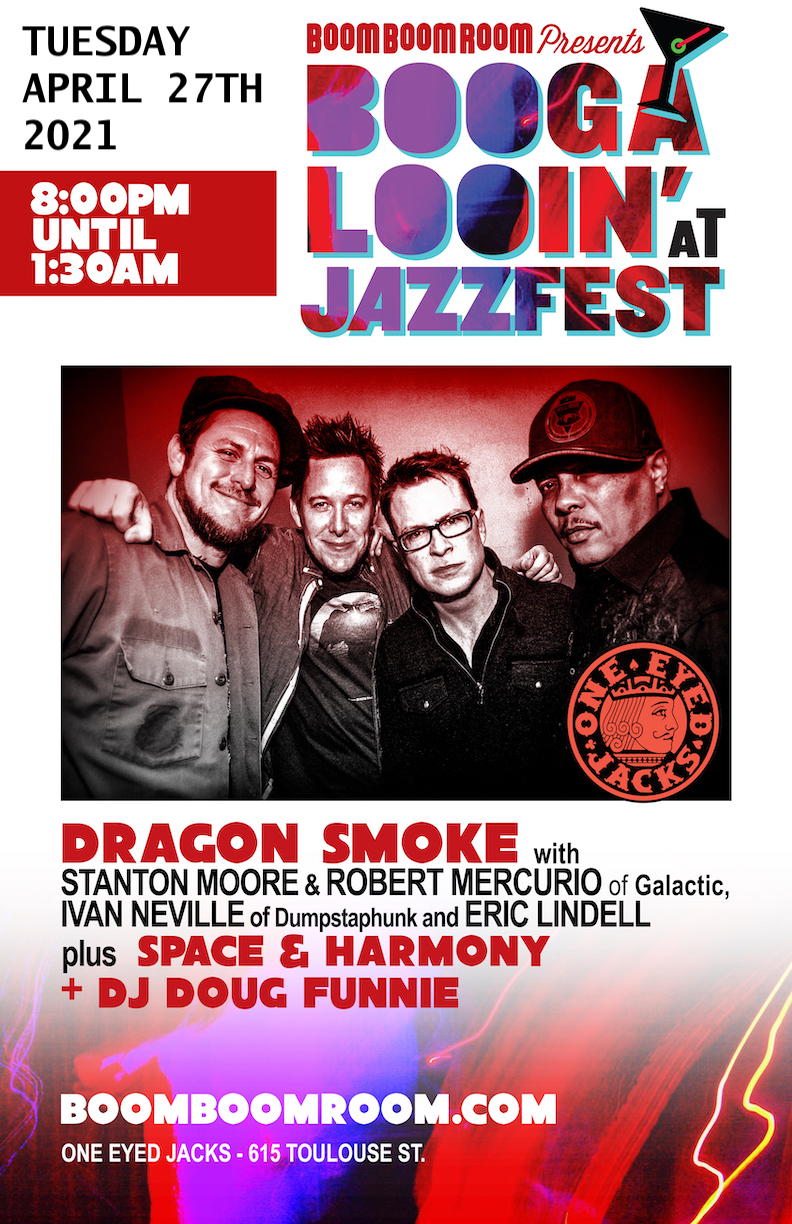 This Show is at One Eyed Jacks, New Orleans

plus:
* SPACE & HARMONY *
(members of: The Revivalists + Naughty Professor)

This BooM BooM RooM Presents show,*DRAGON SMOKE*, has sold-out every show to date…every year in a row in New Orleans during JazzFest and also in SF for more than 18 years!
DRAGON SMOKE has crowds and lines down the street (all night long) each and every night they perform. This band is super hot!

So, don’t miss this one! *DRAGON SMOKE* performs at ONE EYED JACKS on Tuesday, April 27th 2021 bringing its stellar style of dirty-south funk and new New Orleans R&B Rock in what is a kick-azz rockin’ show from start to finish!
The music of DRAGON SMOKE truly represents the New Orleans Funk, R&B and Soul tradition. It’s a phenomenal band. Don’t miss this one!

plus:
SPACE & HARMONY
(members of: The Revivalists + Naughty Professor)

“To me, music is all about bringing people together”, Ingraham explains. “Going to a show with a crew, jamming with some friends in an unfinished basement, and exploring. Space & Harmony is all of those things. It’s what happens when you get four intrepid musicians together with one rule: nothing is off-limits. 80’s funk? Yep. Twisting sci-fi grooves? Totally. Neo-baltic jazz metal? Not sure what that is, but let’s do it anyway.
Space & Harmony is a young-ish New Orleans supergroup that gets together after school to play complicated music, Space & Harmony is a semi-fluid side project consisting of equal parts The Revivalists (bassist George Gekas and saxophonist Rob Ingraham) and Naughty Professor (guitarist Bill Daniel and drummer Sam Shahin) and often intersecting with other prodigious individuals from the greater New Orleans area (most notably sci-fi guitar legend Cliff Hines).