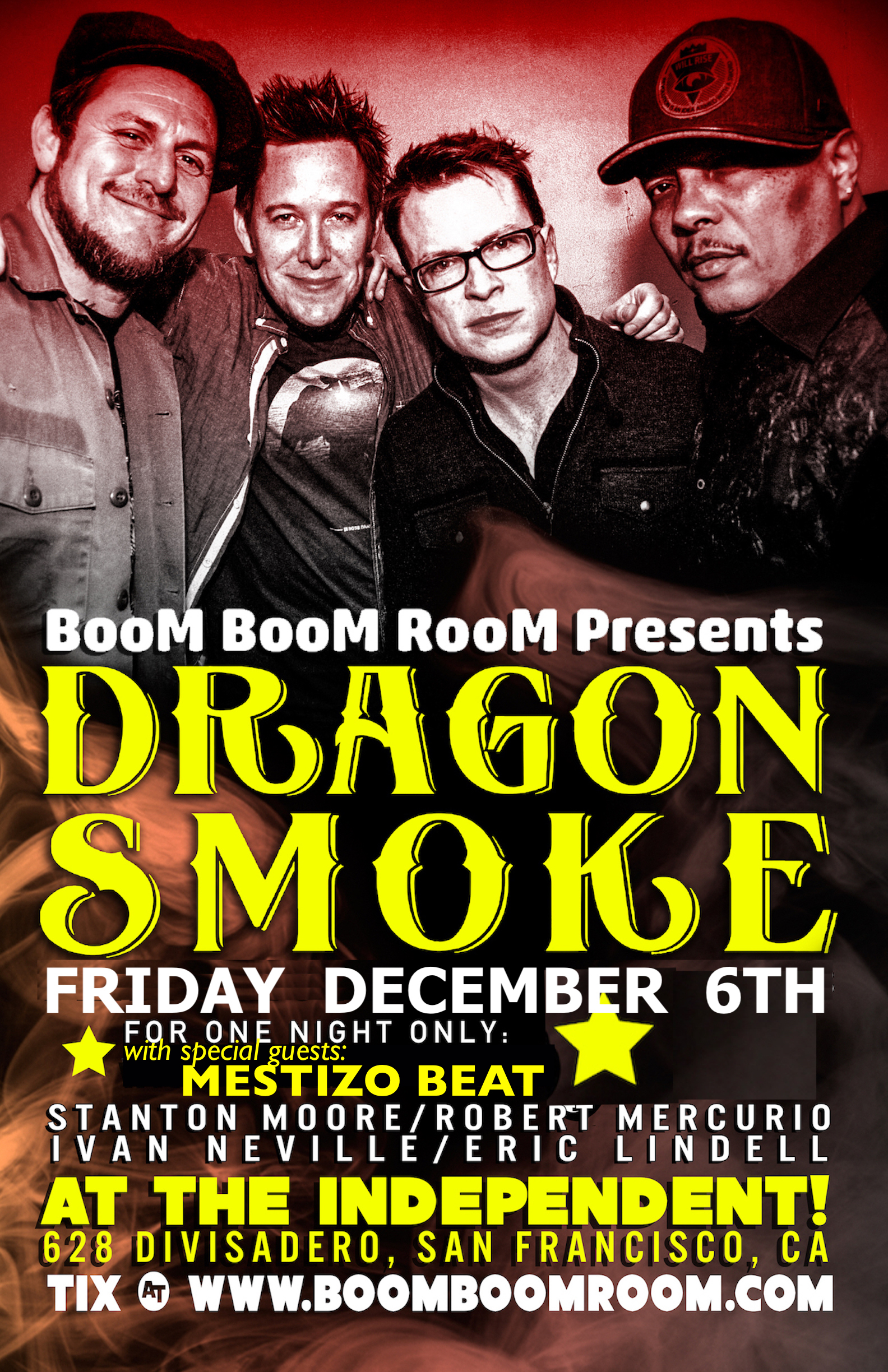 DRAGON SMOKE at The Independent

TICKETS are ALSO AVAILABLE at THE INDEPENDENT BOX OFFICE After 6:30PM.

AFTERPARTY at THE BOOM BOOM ROOM

Bring your Independent Ticket Stub to get $5 off at the door.

Buy Tickets in Advance for this AFTERPARTY at;

Dragon Smoke is a band that formed as part of Boom Boom Room Presents’ New Orleans Jazz Fest tradition known as the “Superjam”. The “Superjam” idea is to put together a band of people who don’t normally play together and see what happens. With the dual vocals of Neville and Lindell, matched with the Galactic rhythm section, the band quickly realized, “We are on to something”and has played every Jazz Fest since it’s inception in 2003. This inception took place at the famed Dragon’s Den, hence the name of the band.
The music centers around Lindell’s blue eyed soul , Neville’s funk and R&B, and Galactic’s groove. Besides a few trips to the West Coast, this band has been strickly playing in New Orleans. With everyone in the band being a leader on their own, it is rare to get this band together. And when it does, it shows that these guys are really having FUN! From the interplay between the members, you would think that Dragon Smoke has been playing shows forever.
Dragon Smoke is looking towards the future, with plans to write and record an album and to do more touring outside of New Orleans and the Bay Area. So be on the lookout for the Smoke—IF YOU SEE SMOKE, YOU KNOW YOU WILL SEE FIRE!

plus special guests:MESTIZO BEAT
is a collective of musicians based out of Los Angeles who compose and perform music influenced by the early 1970’s era of funk, soul, afro-beat, and afro-cuban genre. Formed by lead guitarist Aquiles “Lito” Magaña along with his brother Gus Magaña on drums. These two would come to share their passion and love for this era of music and become the driving core for the group. Influenced by the greats such as James Brown, Fred Wesley and the J.B.’s, Parliament Funkadelic, the Meters, and WAR.The word Mestizo means the mix and blend of cultural heritage; you cannot find a better word to describe the blending of music, environment, and roots that takes place in Los Angeles, which is one of the most diverse regions in the world. The band members come from different cultural and ethnic backgrounds that enrich the music created and performed.What is one to expect from a live performance of Mestizo Beat? One can expect an explosive dance party of heavy hitting rhythms that unify the audience and band into one pulse of love. The full ensemble also includes a brass section, organ player, and percussionist. Their sound creates a freight train of upbeat rhythms and groove that transcends their listeners to a state of exhilaration and rejoice. The beauty of diversity and cultural differences are embraced to boil into one universal meaning of love, rhythm, dance, and soul.and:
DJ KEVVY KEV
Lyrical Miracle, International Raconteur & Jedi Knight. Host of the World’s Longest Running Hip-Hop Radio Show, The Drum. 27 Years of Blessings. The Fiercest.