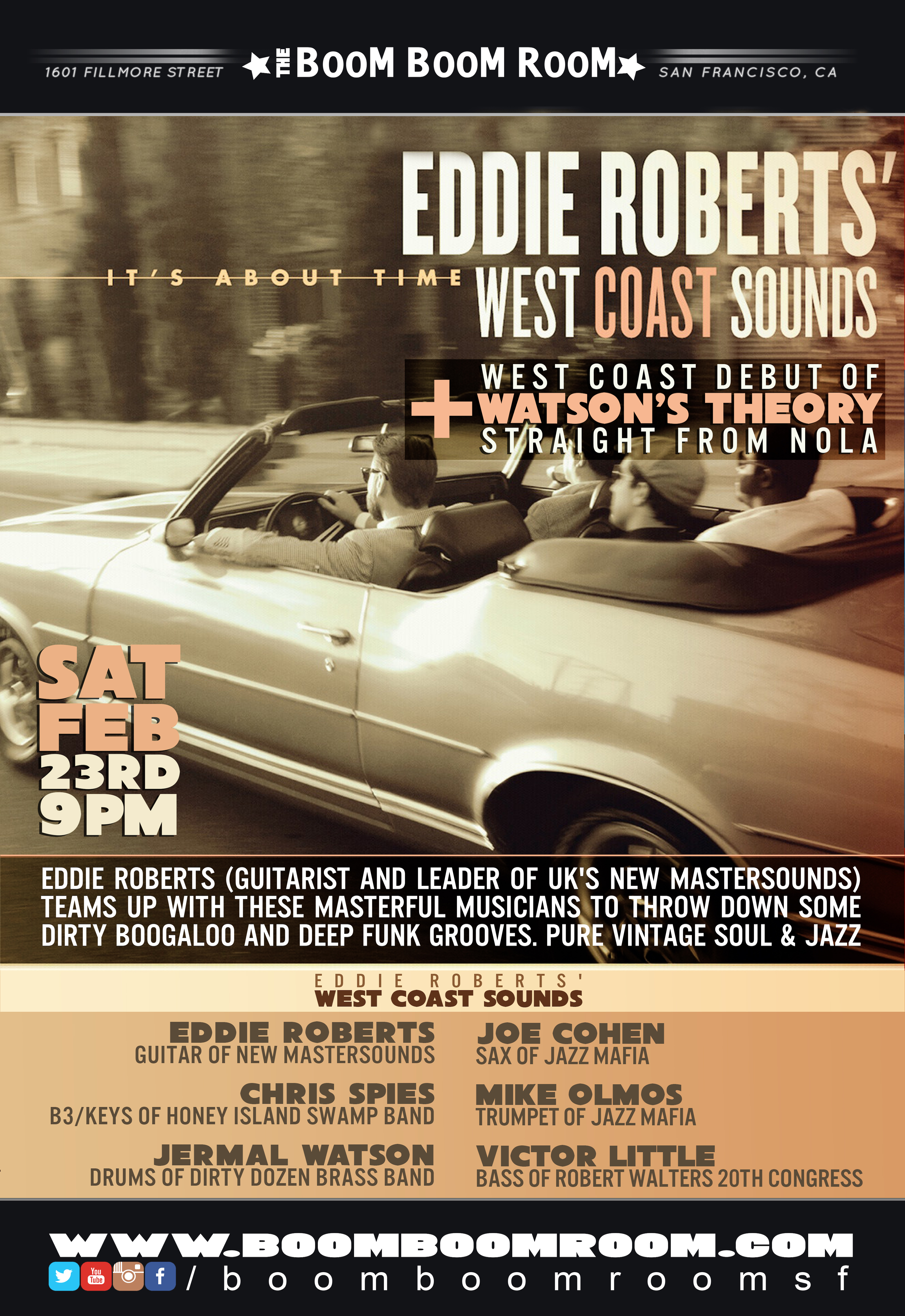 Back For Their First Show at The Boom Boom Room since 2014:

‘Eddie Roberts (guitarist and leader of UK’s New Mastersounds) teams up with these masterful musicians to throw down some dirty Boogaloo and deep funk grooves. Pure vintage sounds. Must see for followers of funky souljazz.”

About Eddie Roberts’ West Coast Sounds:
West Coast Sounds is more than simply a band name for soul jazz guitar maestro Eddie Roberts’-it’s literally astatement about where he’s going in his extraordinary life. It’s about the Welsh native and long time Leeds, U.K. resident manifesting his talents and thriving, writing songs in his favorite city-San Francisco. The globe trotting founder of the New Mastersounds had visited many a metropolis, but he couldn’t get the City by the Bay or its hip music fans out of his head.
“one of the first shows I ever played in the States was at the Boom Boom Room with the New Mastersounds,” recalls Roberts,

“and we fit right in. We played the High Sierra Music Festival afterwards, and the reaction was heartwarming. We arrived as nobody, and left with a Bay Area fan club.”

“I realized how amazing they were, and it set an idea off,”  says Roberts. “The addition of horns automatically changes the sound, although I would say that the grooves and the overall style of the West Coast Sounds is more similar to the New Mastersounds than my solo material, which has usually gone in more of a club jazz direction.”


WHAT PEOPLE ARE SAYING:

“It’s everything you hope for in horn-driven, guitar-laden instrumental funk, wasting no time in challenging even the most stationary of music fans.”

Watson’s Theory is just that. Jermal Watson’s vision for his band, Watson’s Theory, is built upon the principle “It Takes A Village.” It takes a village of sounds, people, ideas, and collaborations formed in unity. Watson’s Theory’s members include Jermal Watson (drums), Kendrick Marshall (keys), Ari Teitel (guitar), Josh Hawkins (bass guitar, and many collabs. Much like hearing Jermal Watson play the drums for the first time, I sensed and experienced a spirit of unity, bright celebration, and innocence. Jermal Watson was born in New Orleans, La, with deep roots from the 9th Ward, the Westbank, and all the way down the road in Port Sulphur. Jermal considers God and family of the greatest value in his world.

Jermal, has been playing the drums since the age of 6. Jermal’s mother sang, and his father was a musician, it is no wonder that he had the desire himself. Playing in churches growing up, he developed discipline, a solid pocket, and a fire groove. Jermal Watson “doesn’t meet no strangers”, as they say in New Orleans. He is the drummer you want to know, and the drummer who knows everybody. “Watson’s Theory allows me to do what I love, variety, playing with friends, and everyone can be apart. Rehearsals are just to lay foundations and ideas, but the show is where the magic begins. It’s like gumbo, no weenies (chuckles).”
. Prior to the birth of Watson’s Theory, Jermal has been drummer/percussionist to many bands locally, nationally and internationally. Watson’s Theory’s Mantra is “ Don’t overthink it, fly where you desire, and have fun making music…together”