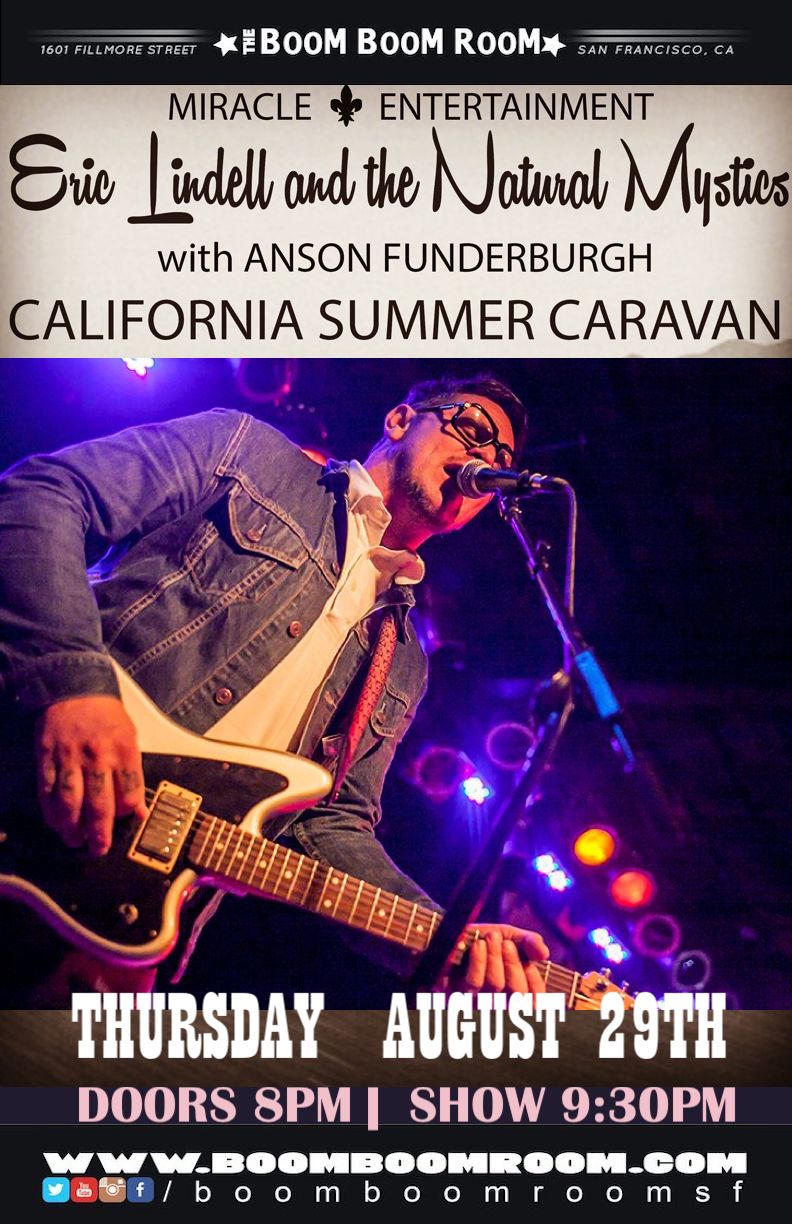 Direct from Funky NEW ORLEANS ... to the BBR!

ERIC LINDELL returns to BooM BooM RooM for a One Night only, Exclusive  San Francisco show!

Renowned roots-rocker Eric Lindell celebrateshis return to Alligator Records and his irresistible new album, REVOLUTION INYOUR HEART, with live performances at Moe’s Alley in Santa Cruz on Saturday,October 13 and Bottom of the Hill in San Francisco on Thursday, October 18,2018. With his raspy, soulful voice and memorable original material, thesongwriter and multi-instrumentalist first came to national prominence onAlligator Records in 2006, releasing three critically acclaimed albums filledwith songs which became instant fan favorites. REVOLUTION IN YOUR HEARTfeatures his most engaging and personal writing and his most enticing,instantly hummable melodies. Concert information is as follows:

Please click on the link to access digital presskit (bio, full album stream):
www.soundcloud.com/alligator-recs/sets/el-revolution-in-your-heart
*Please do not publish or distribute this link.

REVOLUTION IN YOUR HEART was recorded at StudioIn The Country in Bogalusa, Louisiana and produced by Lindell and BenjaminMumphrey. Lindell plays just about everything on the recording – guitar, bass,keyboards, organ, harmonica – except drums, which are expertly played by WillieMcMains. The only other musician on the record is keyboardist Kevin McKendree(Delbert McClinton, Brian Setzer Orchestra, Tinsley Ellis), who plays piano onone song. The twelve universally relatable original songs – many of themautobiographical – combine sunshiny melodies and thick, greasy grooves, andpaint vivid pictures of everyday living. From the first note to the last,REVOLUTION IN YOUR HEART feels not only somehow immediately familiar, but alsoprofoundly moving. Asked about the timeless appeal of his songs, Lindell simplysays, “Music runs deep, it’s a powerful thing.”

Lindell’s Alligator debut, 2006’s Change In TheWeather delighted and surprised music fans hungry for a truly original artist.His deceptively simple sounding songs, laid back grooves and hook-ladenmelodies were further enriched by guests including Harold Brown (War), IvanNeville and Stanton Moore (Galactic). Critics across the country went wild,with reviews and features in Relix, OffBeat, Guitar Player, Down Beat, The NewYorker and many other national and regional publications. 2007’s Low On Cash,Rich In Love and 2009’s Gulf Coast Highway pushed Lindell farther into thespotlight. Appearances on Late Night With Conan O’Brien and National PublicRadio’s World Cafe and Mountain Stage solidified his stature as an artist whosimply could not be ignored. Many of his songs have appeared in films andtelevision shows, including Boston Legal and Treme. He has collaborated andshared stages
with blues and rock luminaries, including JohnFogerty, Jackson Browne, Luther Dickinson and Anson Funderburgh.

With REVOLUTION IN YOUR HEART, Lindell was morethan ready to come home to Alligator. “The timing is perfect. I’m soexcited to get back to focusing on what I do and have such a great team behindme,” he says. Upon release of the album, Lindell and his band will tourheavily, reuniting with old friends and, as always, earning new fans at everystop. AllMusic declares Lindell a singular talent, saying, “He playssoulful, funk-drenched, tight and focused grooves. He is a quadruple threat asa solid songwriter, impressive guitarist, affecting singer and harmonicablower. This is music that’s deceptively difficult to create. Lindell makes itseem not just easy, but natural.”