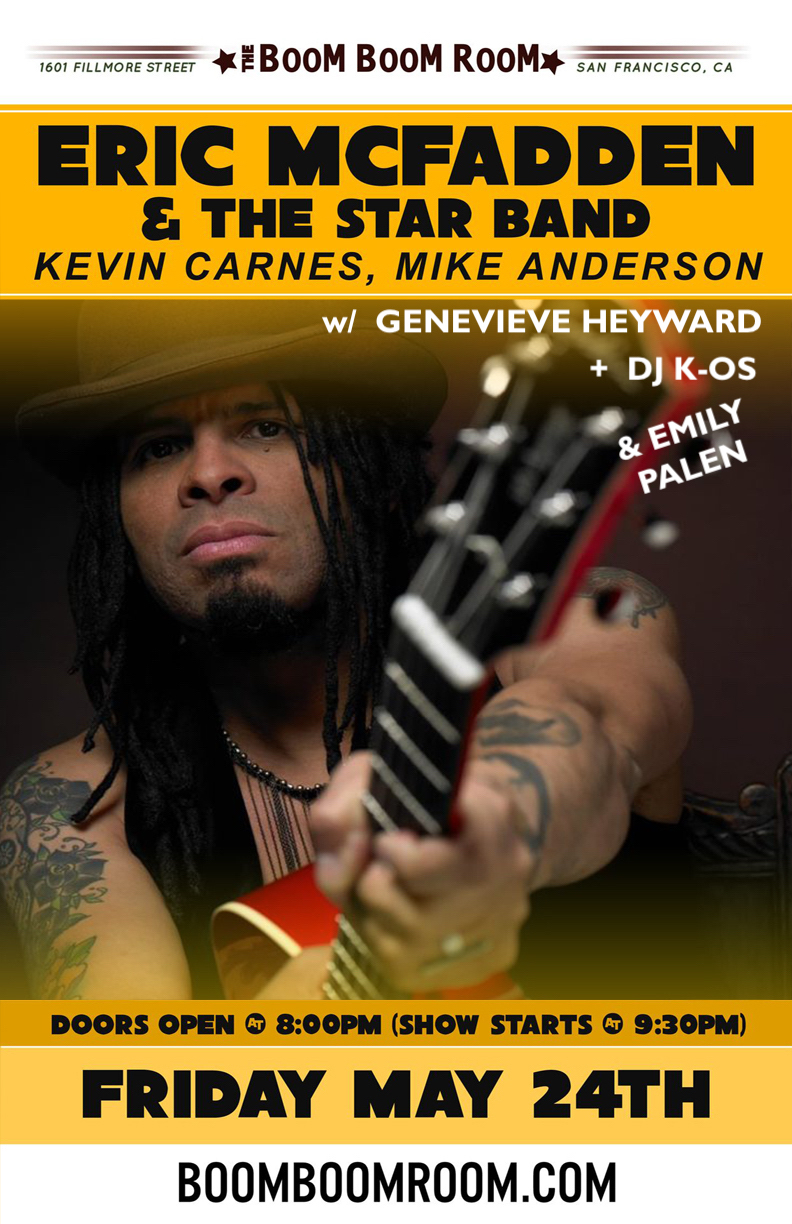 ERIC McFADDEN & THE STAR BAND
Returns to the BOOM BOOM ROOM in support of his new record on Tab Benoit’s Whiskey Bayou label, which is getting enormous response and sensational reviews.

Guitar Player magazine wrote, “If San Francisco is home to anyone approaching the abilities of a modern Hendrix, it’s Eric McFadden…”

“McFadden is a master of guitar and mandolin, a 25 year veteran who waltzes the dark, eerie corridors between Jimi Hendrix and Django Reinhardt…” ( Jonathan Zwickel – San Francisco Bay Guardian

“…McFadden is a six string virtuoso. His command of so many genres- is accentuated with meticulously crafted songs. There’s the poppy twist on traditional psychadelia. Poetic yet sinisterly distorted punk. Rowdy rockabilly. Dark, foreboding grunge. His melodies hinge on seriously catchy choruses that resonate thanks to a crunchy baritone reminiscent of Tom Waits or the late Mark Sandman of Morphine…” (The Denver Post)

Hello phYne people of all varieties,

Relix Magazine recently premeired Eric’s new video for “While You Was Gone” from Eric’s latest release, “Pain By Numbers”. https://relix.com/blogs/detail/video-premiere-eric-mcfadden-while-you-was-gone

Eric spent a couple of days writing and recording in the studio with Eddie Roberts (New Mastersounds), Wally Ingram, Miles Tackett, Jeff Franca and Chris Spies. The project is called, The Sophistikits, and their second single, “Sophistakiddin”” has just been released on Color Red records.

Eric McFadden got together with friend and guitarist extraordinaire, Omar Torrez (Tom Waits), in Cholula, Mexico to record their first duo album, which has just been made available to the public. Bad Reputation recently released Eric’s all acoustic AC/DC tribute album. Eric will be on the road doing dates with Tab Benoit this Spring.

Genevieve Heyward
is a young up and coming midwestern Americana-Country artist with a vocal range as dynamic as her personality. After releasing her debut album (It’s Not Like Anyone’s Listening) in 2017 and touring the US solo and with various other side projects she has recently joined forces with Wisconsin based Norwegian multi-instrumentalist & producer Marcus Trana (Painted Recordings), Guitarist Nick Hoover (Deathfolk,Toivo) and a handful of guest appearances from both American & Norwegian musicians: Greg Roteik (Thy Dirty Deuce, Wifee & the Huzzband), Grammy/Spellemannvinner Kjetil Steensnæs (The Cardigans, Darling West), Thomas Johansson (Cortex, Friends & Neighbors) & Stian Nilsen ( Hot Club de Norvege, Jazzbanditt) to name a few.

She is now finishing up the work on her sophomore Ep titled “The River”, produced and engineered by Trana, due to be released June 1st 2019 on Painted Recordings.