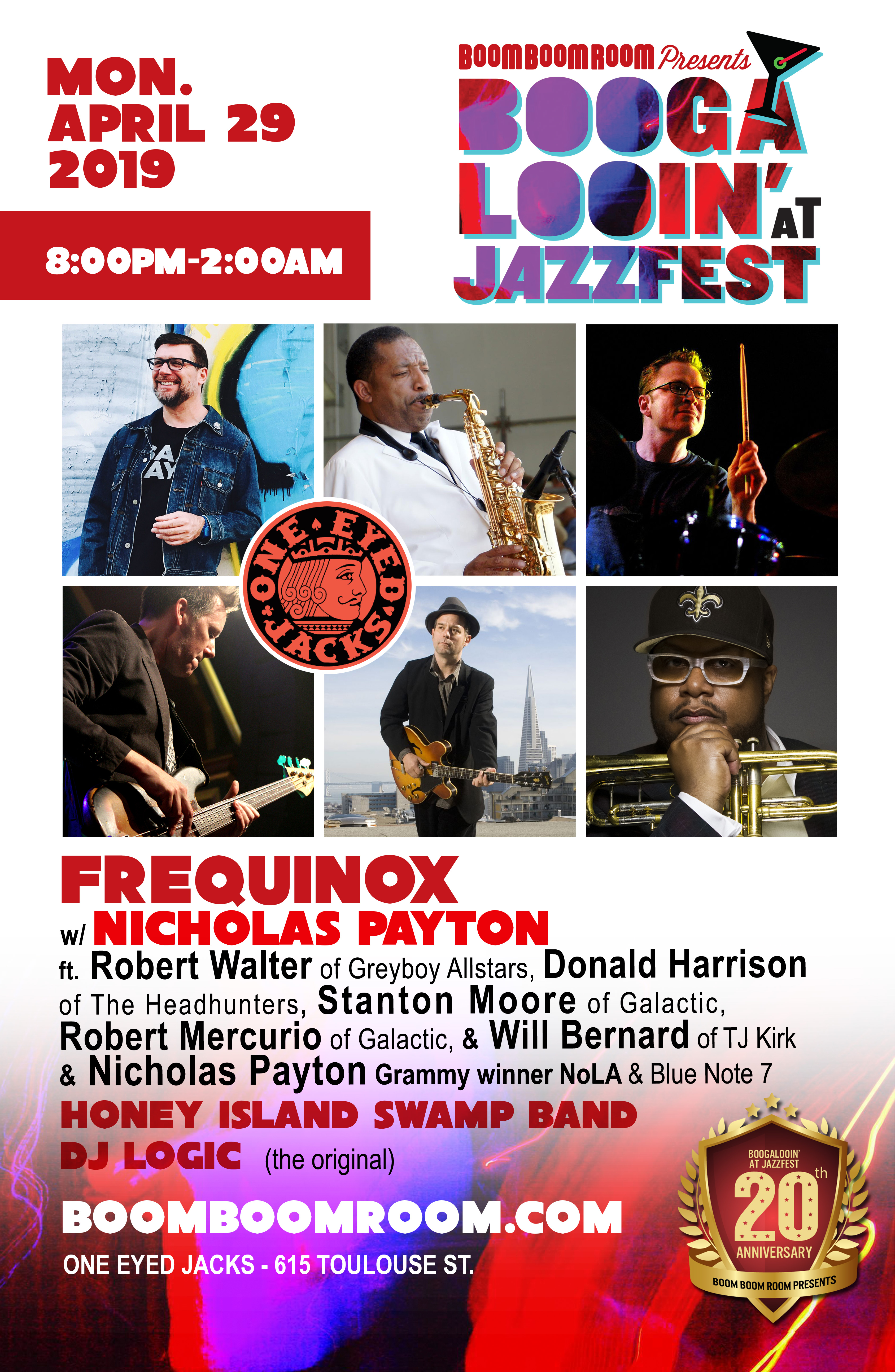 * at ONE EYED JACKS (New Orleans)

The FREQUINOX is not just a band; it is a super group of musicians. Born of the concept that in combining members from the “best of the best” of the West-Coast’s Soul-Jazz Boogaloo bands with those of the “best of the best” from New Orleans to form a Super group so damn funky and exceptional that it would be the cause of an out-and-out, general freak-out for those that witness this sensational group!  This is a signature Boom Boom Room Presents super band original construction.

Donald Harrison
Having recorded with the Headhunter, this sax player from NOLA is a true legend. He also combined jazz with Afro-New Orleans traditional music on his critically acclaimed and influential albums “Indian Blues” in 1991 and “Spirits of Congo Square” in 2000.

Stanton Moore
Born and raised in New Orleans, Stanton Moore is a dedicated drummer and performer especially connected to the city, its culture and collaborative spirit. Driven and inspired by the thriving music scene of his hometown which includes such greats as Professor Longhair, Doctor John and The Meters, Moore’s name is now mentioned amongst these Big Easy mainstays.

Robert Mercurio
New Orleans local, and founder of Galactic, this bassist knows how to get groovy. Mercurio has been performing in the funk scene for decades, and never falls short of bringing his unique sound to the table.

Robert Walter
Robert Walter performs all his own stunts. For 20 years, the San Diego native has been pulling drawbars and pushing the limits of the Hammond B3 organ. Walter helped form the Greyboy Allstars in 1993 with Karl Denson, Elgin Park, Chris Stillwell, Zak Najor, and DJ Greyboy. Influenced by soul-jazz and funk records from the 1960s and 70s, the band juxtaposed jazz improvisation and dance music.

Will Bernard
Grammy nominated guitarist Will Bernard, a Berkeley, CA native and Brooklyn NY transplant studied guitar and piano from an early age with Dave Creamer, Art Lande and Julian White later developing and interest in classical music composition. Since then, Bernard has participated in a host of boundary stretching groups, ranging from jazz, hip-hop and world music to experimental music, with many stops in between.

Nicholas Payton
Payton was born into a musical family in New Orleans, Louisiana. He showed talent for music at a very early age. He received his first trumpet at age 4 and by age 9 was sitting in with local bands including the Young Tuxedo Brass Band.  By the age of 12, he was a member of the All-Star Brass Band that performed and toured extensively. As he developed and studied, Nicholas successfully learned how to play several instruments. In addition to being an accomplished trumpeter, Nicholas plays piano, bass, drums, tuba, trombone, clarinet and saxophone, et al.  During his high school years, Payton attended the New Orleans Center for Creative Arts to study with Clyde Kerr Jr. and after graduation attended the University of New Orleans where he studied with Harold Battiste and Ellis Marsalis, among others.
When he was barely in his 20s, Nicholas made his major-label recording debut as a band leader on Verve Records. Since then, he has recorded a multitude of albums, as well as performed world-wide with his own groups and as a special guest. At age 25, Nicholas won a Grammy Award for his collaboration with Doc Cheatham.

“Payton’s clarion trumpet, as well as his genre-defying solos, stood at the center of the music making… Payton bent notes beyond recognition… No descriptive label or category could be affixed to Payton’s solos, which were as brashly original as they were technically imposing.”— HOWARD REICH, CHICAGO TRIBUNE.

Out April 29 During Jazz Fest In New Orleans

Think The Band’s Big Pink album and add a splash of hot sauce with Willin’ by Little Feat – this group of New Orleans vagabonds nails it.

New Orleans, LA or San Francisco, CA–
From the pristine waters of the Honey Island Swamp, to the vibrant streets of New Orleans, to the hazy corner of Haight-Asbury in San Francisco, this band has endured devastation, relocation, and revitalization. A group whose sound has been tagged “Bayou Americana,” the Honey Island Swamp Band takes the hammer to the nail with the help of producer Luther Dickinson, and presents Demolition Day to the world April 29 on Ruf Records.

This album marks the 10-year anniversary of the Honey Island Swamp Band, which formed in San Francisco, CA via New Orleans after Hurricane Katrina displaced the founding members. With little hope of returning to their beloved city, the band channeled the blues and emotions of their circumstances to develop a soulful style and sound that critics have compared to legendary Blues-Roots-Rock Artists such as The Allman Brothers, Little Feat and The Band.

Recording at the Parlor Studio in New Orleans, Honey Island Swamp Band teams up with producer/musician Luther Dickinson of the North Mississippi Allstars to capture a rhythm and a feel born straight from the heart of Americana. The album features a host of New Orleans finest musicians, including guest appearances by keyboardist Ivan Neville and Tab Benoit on pedal steel.

“Their all encompassing sound of blues, roots, country, and soul has been described as “Bayou Americana.” – No Depression

“We’ve always wanted to record to two-inch tape, to get that old analog sound,” says bandleader Aaron Wilkinson, “and this was our first opportunity to make it happen. Luther was the perfect producer to help us nail that old-school, authentic sound. He was great at keeping us focused on the spirit of each performance, not getting bogged down in details and perfectionism. That’s what we were looking for and what we needed.”

After all, polish isn’t necessary when you’re working with songs this strong. Across its eleven cuts, Demolition Day tips a hat to most of the great American genres, while adding the Honey Island Swamp Band’s inimitable thumbprint. There’s the spring-heeled slide-blues of “Ain’t No Fun”, the upbeat funk of “Head High Water Blues”, the cat-house piano and country-fried guitars of “How Do You Feel”. But then, on the emotional flipside, there’s also the reflective wah-guitar lilt of “Say It Isn’t True”, the mournful funeral-jazz slow-burn of “No Easy Way” and the heart-in-mouth acoustic confessional of “Katie”.

“We’re diverse and complex people,” explains Chris Mule, the band’s guitarist, “and our audiences are as well. So we try to let our music reflect that.”

Drawing from their diverse backgrounds, the band’s lyrical content is quite colorful. “They really are all over the map,” Aaron explains of the topics explored on Demolition Day. “Some are rooted in reality and personal experience. “Head High Water Blues” is a look back at the Hurricane Katrina experience now that ten years has passed. Much has been rebuilt, but much has not and never will be – and the song is more about the emotional scars that can never be fully erased. Others are just fiction and storytelling. We had the music for “Through Another Day”, and it sounded sort of old and epic and Southern, and that inspired this Civil War-era storyline that became the lyrics. Others are just sort of playful nonsense about life and relationships, like “Watch And Chain.”

Demolition Day is about rebuilding more than tearing down. It’s about a renewal of purpose, reflected through powerful lyrics and stories, great slide guitar on top of deep bass and rhythms that continue to move the foundation that the band was built upon.

New Orleans has a deep well of music, and that well has no rules – the only boundaries are the ones that we place on ourselves.

On Demolition Day, the Honey Island Swamp Band breaks these boundaries to deliver a sound so relevant and honest that even in the darkest of days – like the violent storm that brought this group of musicians together – Demolition Day still shines brightly.

DJ LOGIC (the Original Logic)
DJ Logic is a turntablist active primarily in nu-jazz/acid jazz and with jam bands. Kibler was born and raised in The Bronx. An early interest in hip hop led to his using the turntables, practicing often. He has performed as a guest of Ratdog, Medeski Martin & Wood.