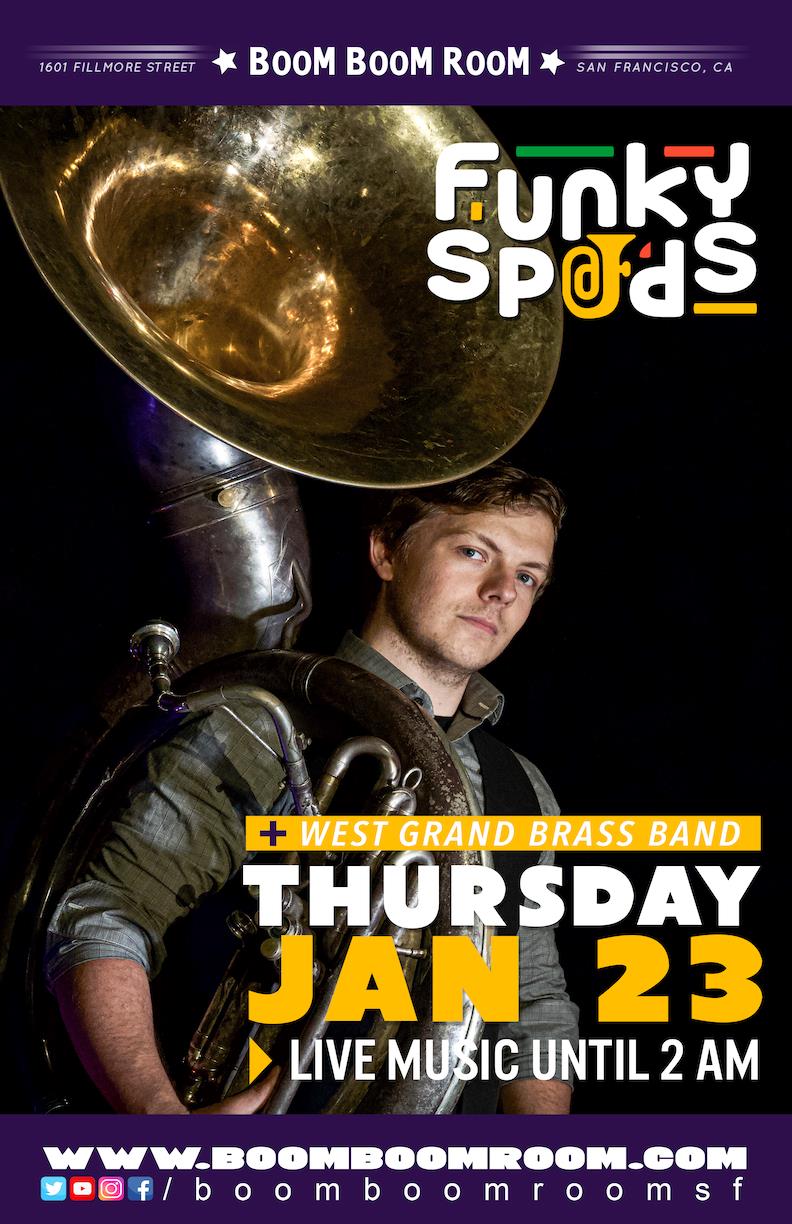 Come shake your body and move yo feets on the dance floor…
We are gonna party all night and the music is right…. Two Funky stellar brass funk bands bumpin on Thursday Night…

Funky Spuds is a funk band with something to prove. Created to demonstrate the possibilities of brass, Funky Spuds crafts performances to maximize funkiness; from the extended techniques of the sousaphone, to the dynamic soloing displayed by the band’s veteran leader on both saxophone and guitar.

Funky Spuds is the world’s most exciting sousaphone-lead funk band. Tackling funk, jazz, rock, and more, Funky Spuds’ primary goal is to be dance-able. The musicians in this band excel at fulfilling multiple roles in the band, creating a dynamic show that never repeats itself.

Funky Spuds takes a bold approach with the sousaphone, using it as the primary bass instrument and expanding on the traditional sousaphone techniques by using sounds inspired by DJs, multiphonics (singing and playing at the same time), and by running the sousaphone through electronic effects.

The Spuds are named after the state vegetable of band leader Shane Cox’s home state- Idaho.

West Grand Brass Band (WGBB) is a group of 6 talented independent musicians that combines the Dixieland brass band tradition with modern musical genres and sounds. Their music takes the form of an ever changing mix of traditional songs, re-imagined covers, and genre-expanding originals.  Based in the cultural hub of Oakland, California, WGBB prides itself in creating a party wherever they perform.

​WGBB was formed in the summer of 2015 after the founding members marched together in the Carnaval Parade in San Francisco’s Mission District with a samba dance troupe called “The Hot Pink Feathers”. They developed their sound while busking at Lake Merritt in Oakland, CA, and now perform at a wide variety of events and venues around the San Francisco Bay Area.