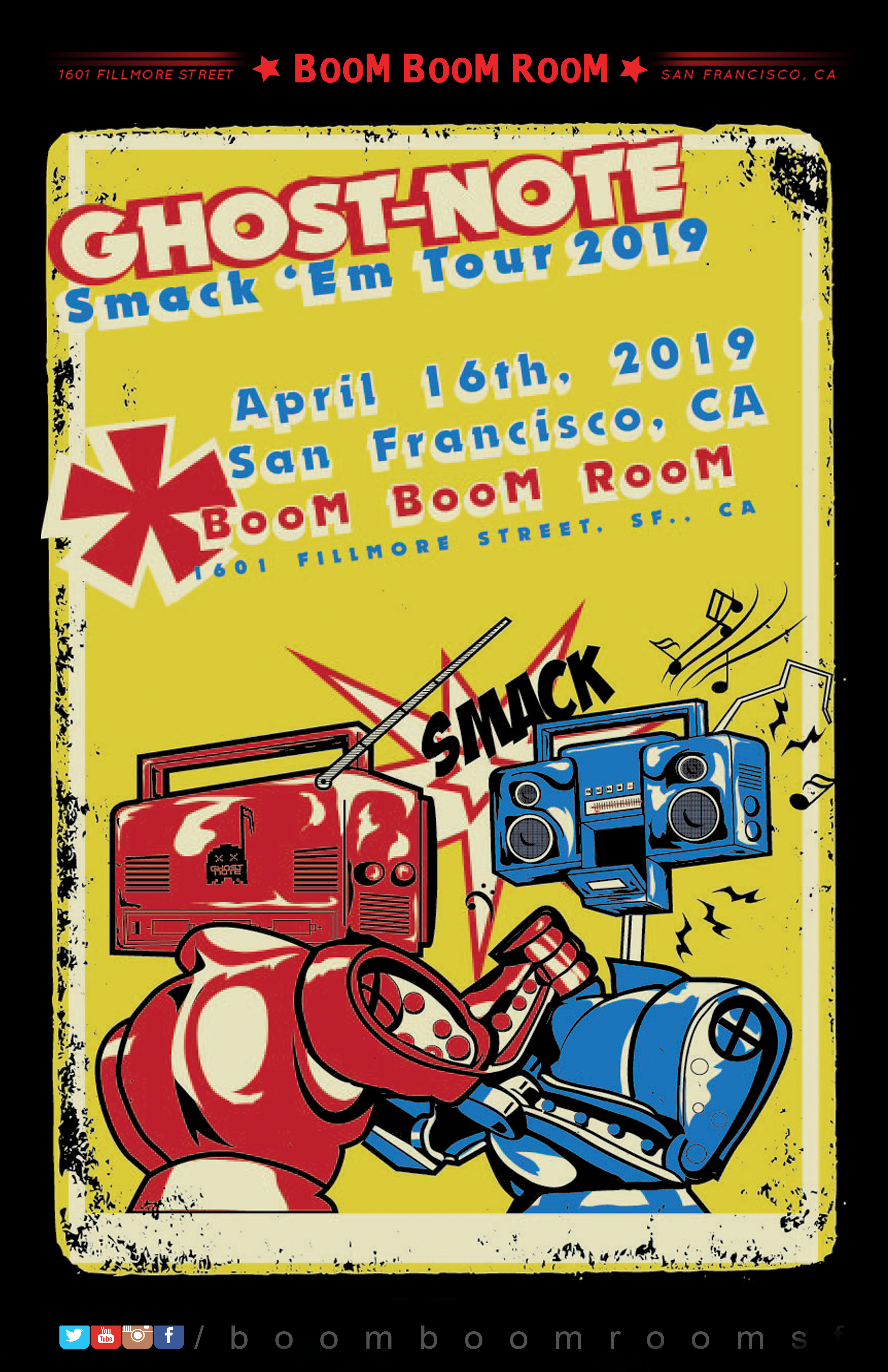 We invite ALL ya’ll to join us as we welcome GHOST-NOTE featuring Drummer Robert Sput Searight & Percussionist Nate Werth (of Snarky Puppy) together MonoNeon (of Prince) and this all-star band.

Headed by SNARKY PUPPY’s multi-grammy–winning percussionduo of Robert “sput” Searight and Nate Werth, GHOST-NOTE is an explosion of sound. With an expansive roster ofnext-level musicians—representing members of Prince, Snoop Dogg, Erykah Badu,Herbie Hancock, Kendrick Lamar, Marcus Miller, Toto, Justin Timberlake,and more—the band is pushing funk music into the future, building on the uplifting, pioneering foundations laid out by the likes of James Brown and Sly& The Family Stone and infusing their fresh take with tastes of AFROBEAT, HIP-HOP, PSYCHEDELIA, WORLD FOLKLORE, and more.

Fearless, both in swagism’s sonic depth and conscious social commentary, the band easily translates this adventurousness in a live setting. GHOST-NOTE’s live performances are bold and in your face, with the group offering up none ofthe tight-laced pretenses frequently associated with the band’s Jazz roots. Focused on creating seductive danceable grooves and a contagious feel-good energy, each show is an opportunity to let loose and connect, for both fans and the musicians alike.

After forming in 2015, GHOST-NOTE has already begun to take the world by storm. The group’s two studio albums—2018’s swagism and 2015’s fortified—have earned critical acclaim and popular success around the globe, with both albums hitting the #1 spot on the Itunes Jazz charts. Furthermore, the ever-growing family of musicians has mounted successful headlining tours in the United States, Canada, and Japan and performed at high-profile international music festivals and events.

Dywane Thomas, Jr.  also known as MonoNeon, is an American bassist and experimental musician. He is known for his presence on YouTube playing bass guitar and known for being one of the last people to work with Prince. Thomas also played with Grammy Award-winning R&B artist, Ne-Yo, on his fourth studio album. He is a native of Memphis, Tennessee.

In 2015 MonoNeon began playing bass with Prince and his protégé, Judith Hill. Some of the live shows have been at Paisley Park. On 11 January 2016, Tidal released the track Ruff Enuff by MonoNeon, only four and a half days after its initial recording. The instrumental track features Prince as producer and on keyboards. The following day, the track was replaced with a vocal version with lead vocals on vocoder by Adrian Crutchfield.

The linernotes provided with the track state:

“You may recognize Kirk A Johnson on drums, MonoNeon on bass and Adrian Crutchfield on sax and electric woodwinds as the house band 4 Prince’s Paisley Park After Dark Jam Sessions. Well, that’s not all they do. 4 the past week they’ve been cutting basic trax 4 their as yet untitled debut album. With Prince producing and handling the keyboard & guitar duties, the set promises 2 b picking up right where Judith Hill’s BACK IN TIME left off. These brothas murder the funk! Normally they wouldn’t let a track out until it’s finished, but this one had 2 go! It was ruining everybody’s good loox. If U think U can resist the funk, check out the key change of Mono’s bass solo at near 4 o’clockmark.”

Robert Sput Searight and Nate Werth:
If the Grammy Award winning band, Snarky Puppy, was a heart, drummer Robert Sput Searight and percussionist Nate Werth serve as its explosive pulse. World renown for their artistic communication throughrhythm, this dynamic duo debuts their own project, expanding their percussive voice into a night of melody through innovative grooves and captivating artistry.

Robert Sput Searight is one of the most influential drummers and producers in modern music. Hailing from a family of musicians in Dallas, Texas, Searight came up alongside artists like Erykah Badu, Norah Jones, and Roy Hargrove at the world-famous Booker T. Washington High School for the Performing Arts. He won a Grammy Award at age 18 with his own group, God’s Property, who changed the face of Gospel music with their debut album. Since then, he proven to be unparalleled in versatility as a drummer, keyboardist, and producer. Artists like Snoop Dogg, Erykah Badu, Celine Dion, Justin Timberlake, P Diddy, Timbaland, Myron Butler, and Kirk Franklin employ Searight’s talents regularly.

As the undeniable secret weapon of Snarky Puppy, Nate Werth is both rooted in tradition and constantly innovating in the percussion world. His creative approach to sonic possibilities and rhythmic interplay has been integral to the sound of the group, and has earned the respect and support of percussion big-wigs like LP founder Martin Cohen.  Having studied Indian, African, and Latin American traditions extensively abroad, Nate brings a unique sound palette to every musical environment, his deep sense ofgroove, passion and eclectic style, result in a distinct musical voice that propels him across musical borders.

DIRTY REVIVAL, A SEVEN PIECE SOUL/ROCK BAND HAILING FOR PORTLAND, OR, IS QUICKLY GAINING NOTORIETY FOR THEIR INSPIRED SONGWRITING AND IMPRESSIVE LIVE PERFORMANCES AND HAS BEEN ELECTRIFYING STAGES ACROSS THE US SINCE 2013.

Many of them friends since high school, each player is as good as the next andall of them exceptional in their own way, Dirty Revival functions like a welloiled machine with every part doing exactly what it’s supposed to.

Dirty Revival’s democratic approach to music shows in their songwriting, their original music effortlessly incorporating several different genres of music. At times showcasing their unique take on the soul and funk sounds of the 60’s and 70’s, then, straddling the line between rock band and pop band. The care the group takes in the arrangement of their original music is reflected in their cover choices, known for their dynamic recreations of classic songs by artists ranging from NIN toBlack Sabbath and Rage Against the machine, illustrates why it is difficult to put the Dirty Revival in any one genre of music.

Dirty Revival has shared the stage with many legendary acts including George Clinton and Parliament Funkadelic, Michael Franti, The Motet, Gift Of Gab, Lyrics Born, and members of The Meters, George Porter Jr. and Zigaboo Modeliste. Participating in several notable events and venues, including Waterfront Blues Festival (OR), WorldMusic Festival (CA), Arise Music Festival (CO), Upstream 2018 (WA), The Filmore (SF) and many more wrapped into the the several years of multi regional touring they have under their belt.  Dirty Revival has also spent time in studio releasing a full length album (self-titled, Dirty Revival)  and a 7” record (So Cold).