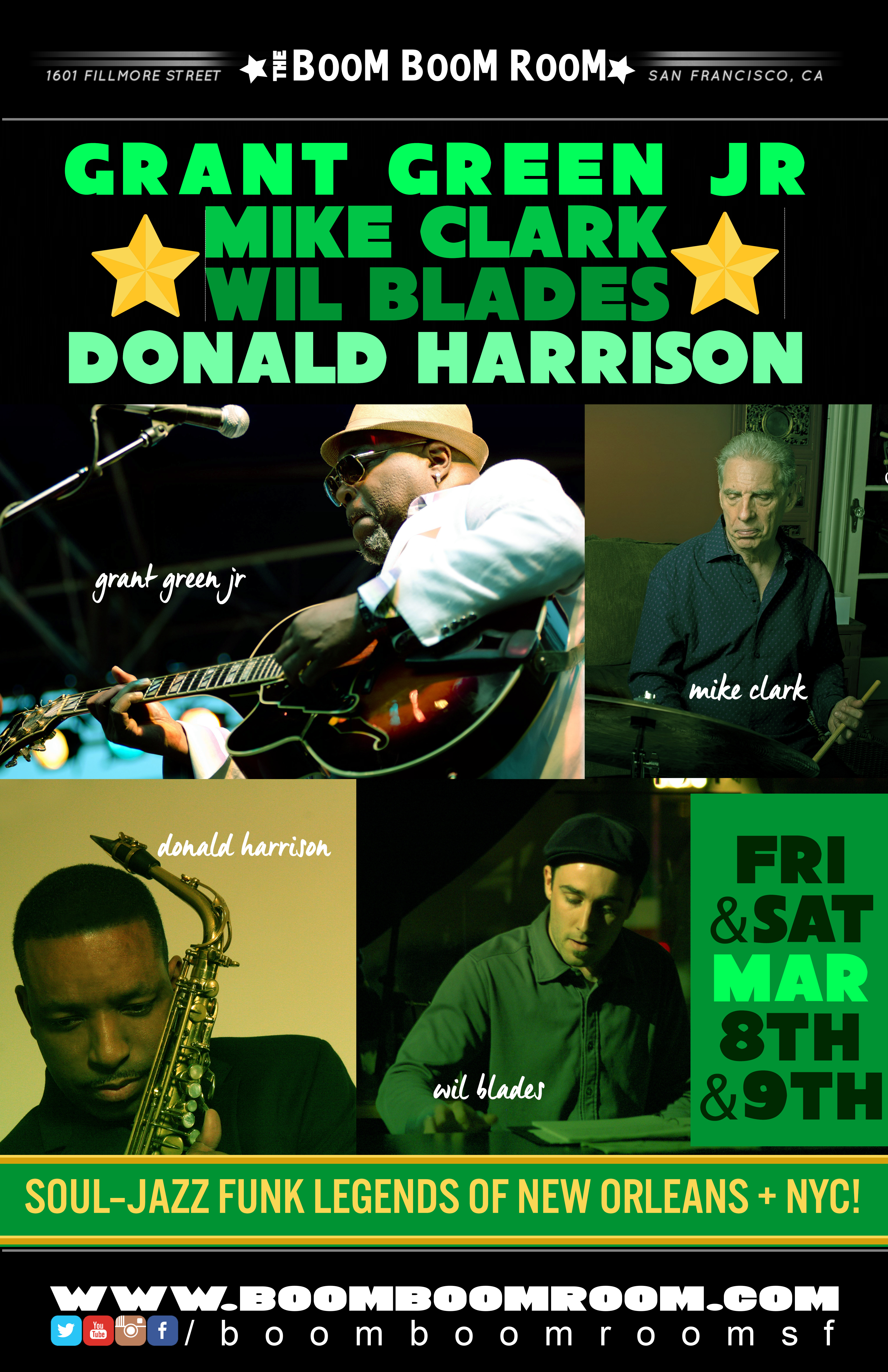 plus:
* JAKE NIELSEN’s TRIPLE THREAT *
(The most in demand Blues/Funk Trio in Northern California!)

As the son of legendary jazz guitarist Grant Green(1931-1979), Grant Green Jr. was exposed to exceptional musicianship right from the start. Growing up in Detroit, Grant enjoyed a constant parade of jazz greats streaming through his living room. His neighbors included Marvin Gaye,Stevie Wonder and Gladys Knight, members of the Four Tops and the Temptations.Miles Davis was known to join impromptu jam sessions in their home. Grant Green Jr. has released music as part of the Godfathers Of Groove (w/Bernard Purdie), and is often seen as part of Col. Bruce Hampton’s band, and now he’s brought us his solo record, SOUL SCIENCE, recorded in Atlanta with Khari Cabral-Simmonsand Daz-I-Kue. SOUL SCIENCE features Atlanta greats Nick Rosen, Julie Dexter, Jacob Deaton, Kevin Scott, and Duane Trucks…

“He’s a great jazz drummer—and he hasn’t lost any of the stuff that he brought from Oakland. So now he’s totally free to do both, and he does. The solo he played on the album Thrust, on the song “Actual Proof,” is one of the best drum solos on any of my albums. So many people have remarked about that solo, saying, ‘Incredible.’”
-Herbie Hancock

By 2000 Mike made a foray into the popular jam band scene.His group Prescription Renewal pulled together cross-generational talents, suchas Charlie Hunter, Fred Wesley, Skerik, Robert Walter, and DJ Logic, and featured special guests such as Donald Harrison, George Porter Jr. of The Meters, Les Claypool, Larry Goldings and fellow Headhunters alumni Bill Summers. He also toured with The Roots Funk All Stars. Along with James Brown’s drummer Clyde Stubblefield, Mike’s beats with The Headhunters (most notably God Make Me Funky) include some of the most sampled in hip hop.

Donald Harrison was born in New Orleans in 1960 and grew upin a home environment saturated with the city’s traditional brass bands, afro-new Orleans culture, modern jazz, R&B, funk, classical, world and dance music. His connection to New Orleans’ roots was deepened by his father, a Big Chief, in a new American style of African culture developed in New Orleans.The culture is an offshoot culture of Congo Square, one of the only known places in North America where Africans openly participated in their culture inthe 18th and 19th centuries and still participate in it throughout the city.  Donald became the Big Chief of The Congo Square Nation Afro-New Orleans cultural group in 1999 and coined the term Afro-New Orleans to describe his culture. He designed and built New Orleans’ first cultural attire to merge African designs with Afro-New Orleans style cultural designs. Harrison created “Nouveau Swing,” a style of jazz that merges it with modern dance music like R&B, Hip-Hop, Soul and Rock. Over twenty years ago, he also combined jazz with Afro-New Orleans traditional music on his critically acclaimed and influential albums “Indian Blues” in 1991 and “Spirits of Congo Square” in 2000.

No less a jazz organ authority than the legendary Dr.Lonnie Smith has called Wil Blades “the future,” anointing him the heir apparent to “carry on the legend [and] the legacy of the organ, of the B-3.” Over the past fifteen years, Blades has grown to be one of the mostin-demand organ players on the Bay Area scene. In addition to leading his own trio, he works regularly in duo situations with drummers Billy Martin (MedeskiMartin and Wood) and Scott Amendola (Nels Cline Singers); and in trios led by guitarist Will Bernard and drummer Stanton Moore. He’s performed and recorded with a host of jazz and blues greats including Melvin Sparks, Idris Muhammad, Joe Louis Walker, Don Braden, Donald Harrison, Nicholas Payton, Karl Denson, Charlie Hunter, Jason Marsalis, Herlin Riley, and many others.

JAKE NIELSEN’s TRIPLE THREAT
(The most in demand Blues/Funk Trio in Northern California!)

Jake Nielsen is the hottest new act in the blues scene! He’s been making his way through the West Coast making lasting impressions on everyone that watches his talent, and inspiring with his passion!
Born on march 29 1985. Jake was born with cerebral palsy, limiting the use of his legs. He was always determined to never let that bring him down, so he lived a very active life as a young kid and participated in every sport he could. He played wheelchair basketball, and was the inspiration to start a baseball league for children with special needs.
Jake comes from a family that has a long line of professional cowboys. He grew up in the rodeo scene and wanted to ride calves at a very young age. He was the only cowboy that couldn’t walk and was an instant hit. Soon he was sponsored to ride all over the west coast and made a lot of buzz in the media. There were newspaper articles and magazine write ups on him, he gained a lot of respect and inspired a lot of people at a very young age. He did this until he was 13 years old.
Sometime during his adolescence he discovered music. He was 15 when he first started playing guitar, and caught on very quickly. He was 17 when he formed his first reggae/rock band FUBAR. Together this band accomplished a lot. They played in many different festivals, and opened up for many great bands like Passafire, Ballyhoo, Opio, Isreal Vibrations, Mike Pinto, Rebelution and many more. They won the Monterey Battle of the Bands in 2007 and a Swagg Award for best reggae album in 2010. Things didn’t work out for FUBAR, they parted ways in 2010, but Jake stayed busy playing with many local talented musicians and attending Pro Jams while recording his first solo album “Jake Nielsen’s Triple Threat” with is music mentors Chris Weinress and Derrick (D’Mar) Martin which is available on Itunes. Generating a lot of attention for his live performance, with so much energy and funk you have to get out of your seat and dance! With this album Jake played all over California, opened for big names such as Elvin Bishop, Roy Rogers and Travis Warren of Blind Melon. And also making his international debut in Canada, Also his song ‘Drinkn Blues’ was featured in a short film called Bondi Blues with Dan Aykroyd.
These days Jake is touring with Kyle Talty on drums and Dave Palmer on bass, two of his oldest jamming buddies. Together these three have accomplished many great things! And also bringing back his reggae roots between the funk and blues! But the style they have never changes, its always an ‘In your face’ style, guaranteed to make you get up and dance! Working with Kyle and Dave, they have opened for big names such as Collie Buddz, Shwayze, The Holdup, Indigenous and Papa Mali. They have also headlined festivals, have made appearances on T.V, magazine and newspaper articles and radio shows, and have many monthly show dates at big name clubs in the Bay Area.