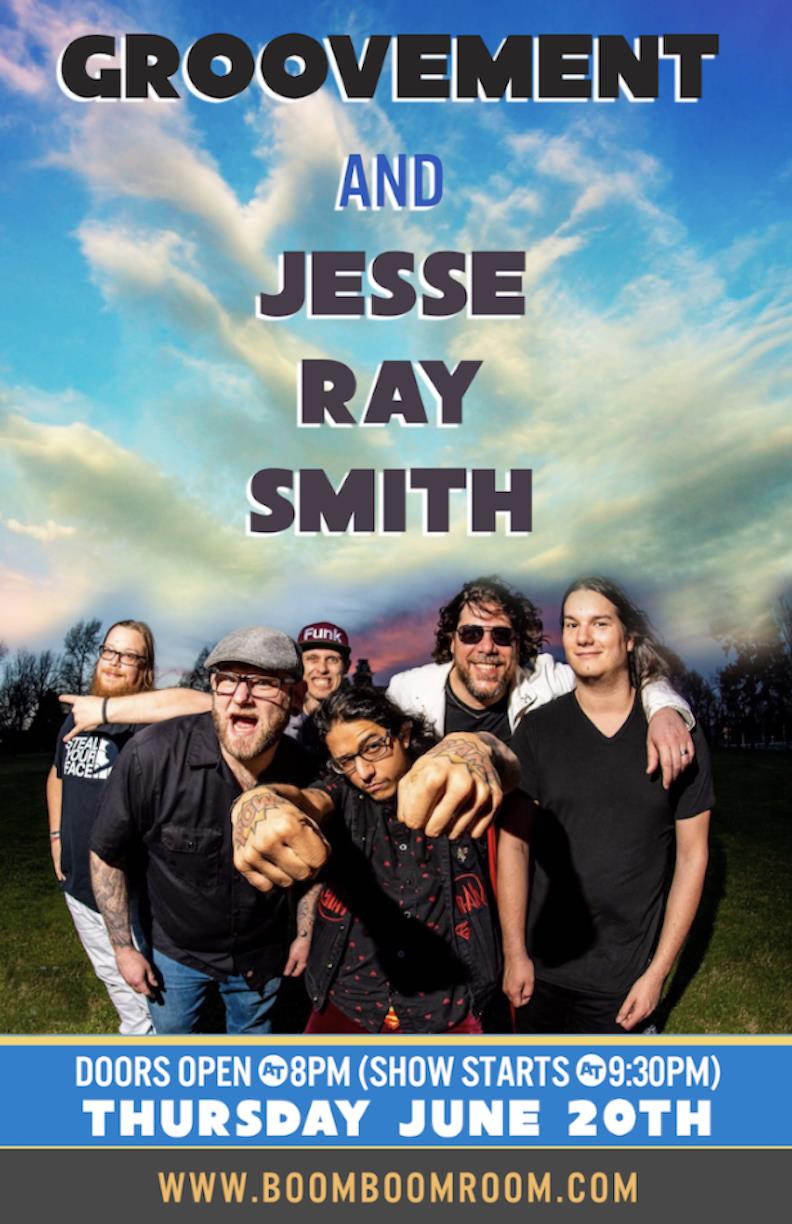 a lively, six man funk-rock group from Fayetteville, AR, has been described as what you’d hear if Led Zeppelin caught a Soul Train with Grouplove and they threw a party while headin’ down the tracks to Motown. Their catchy original melodies, big harmonies, funky grooves and impressive solos make up a setlist you can’t not dance along with. That would be enough to please any music fan, but throw in Groovement’s titillating twists on some unexpected favorite cover tunes, and you’ve got a mega-memorable night of live music on your hands.

Deitra Magazine says Groovement’s shows are “a definite party and a must-see for anyone who loves music,” while BreakfastOnTour.com calls them “pure fun” and “worth the sweat” at a hot summer music festival performance. To check out Groovement in action, watch videos of performances at https://www.youtube.com/user/Groovementband.

In 2017, the group’s fan base expanded internationally, with several sets at Australia’s Caloundra – basically the Down Under version of Hangout Fest – and Groovement made such a remarkable impression with fans that the event organizers used two of the band’s tracks for official promotional videos and invited them back this year for more. (Groovement is working to add other performances to their 2018 Australia trip as well.)

“Caloundra’s organizers discovered us while we were playing in the French Quarter during New Orleans Jazz Fest earlier last year,” explained drummer Bryan Burkhart, who founded Groovement in 2009. “We ended up playing three different times for the festival crowd, and each time the crowd more than doubled; we also played the staff party after it ended. It was a great experience – and they loved us so much that insisted we come back to Caloundra this September.”

Anyone who has seen Groovement live will easily understand why fans and event promoters are so impressed: Their sound incorporates funky dance grooves, high-energy rock and roll, pop-style song structure with catchy, melodic hooks, and a flexible jam-band style of improvisation – so no two shows are ever the same. Fans have compared their sound to the likes of Jamiroquai, The Main Squeeze, Galactic and Trombone Shorty.

Their setlist is heavy on the original songs that have given them much traction; they cite a broad range of songwriting influences such as the lead guitar solo styling and chord structures of Pink Floyd and the pop hooks and vocal approach of Stevie Wonder, to the dance grooves and lyrical prowess of Michael Jackson.

“Multiple band members wanted to be Michael Jackson as early as they could walk,” Burkhart says, laughing. Other major influences on their sound are the funky bass grooves and party vibes of Parliament Funkadelic, James Brown and the Motown sound, and the funk-horn energy of bands like Chicago and Lettuce. “Lettuce’s influence as a leading jam-funk-horn band cannot be overstated, and how they’re the standard of keeping an instrumental band interesting and high-energy,” Burkhart noted.

Horns? Yes. Groovement is one of those rare groups that includes the powerful, fun energy of brass – in their case, a gifted trumpeter – and the band seamlessly includes the brass sound even on guitar-rock covers that don’t traditionally include horns.

Groovement is also skilled at mixing in unexpected cover songs from many different genres. Their takes on well-known favorites is a nice change of pace while also giving new fans something familiar to sing along with. Some of the established artists that an audience member might hear covered at a Groovement show include Talking Heads, MGMT, Peter Gabriel, Gorillaz, Rick James, Al Green, and  JJ Grey & Mofro.

But as Burkhart noted, the group emphasizes its original songs and sound – and thereby embraces many fans whose tastes aren’t as simple as one well-known act or genre. “We are working on new material now, finishing and polishing a big chunk of songs,” he said. “We will be introducing more of them as we tour for the rest of this year, and we hope to start recording soon and have a new record out next spring.”

Groovement’s efforts are founded on decades of experience among its talented lineup, which is Burkhart; founding member Adam Becker on keyboards; newest member and former Funk Donors singer Oz Cullum manning lead vocals, guitar, harmonica and percussion; Tom Smith (formerly of TotoJojo) on trumpet and backing vocals; bassist Supa Man (an alum of Andy Frasco & The U.N.); and Lucas Parker (formerly with the band Mouth) on guitar and backing vocals.

Jesse Ray Smith: Iwas raised in the artistic, small-town suburbs of Marin County, a few miles anda full generation removed from the hippy movement that swept through San Francisco in the late 60’s. From FleetwoodMac’s Rumours to Stevie’s Songs in the Key of Life, many great records came outof Marin County, fueled by the musical prowess of legendary concert promoterBill Graham. This was my home, and these legends were a part of theinfrastructure that sustained us. Although my parents weren’t big Deadheads,their catalog ran deep, exposing me to a vast collection of great records andartists. Whether it was Graceland, Ziggy Stardust or Dark Side of the Moon — arecord was always playing and music was a very present part of my life.

My love for the craft of songwriting grew stronger asI got older. From as early as the age of ten, I had a pressing desire to followin the footsteps of my musical heroes. Not because they looked cool or livedthe dream; because they SOUNDED amazing and, musically, had IT figured out. ITwas always about the music for me, and as my family life became more tumultuousin my early high-school years, I came to rely on the cathartic escape that Iexperienced while sifting through my deeper thoughts and emotions. I kept myhead down through, what feels like, the dark ages of my early life, as Iwatched my mother’s addictions swallow her up. Music became my drug and hasremained that way to this day, always providing me with the needed awarenessand reflection to navigate my way through the rapids toward calmer waters. Ifeel like my best work has always come in times of need – when I had nowhere togo to find the truth but deeper within. I am confident that need is lasting.

So here I am: a few bands removed, a husband, a fatherand a songwriter, finally facing the music and all my ambitions head on. I’mfocused on making the one thing that has always intrigued me the most: a Greatrecord. One that comes from a place of truth and passion and carries aself-contained, distinctive and palpable presence and intention. All of thesongs being considered are songs that I’ve written over the course of the last10 years, as I navigated my way in and out of different musical and personaljourneys. I hope you stick around for the “long story” and hear something youlike.

“Smith leans into meaning with a full andopen heart. His brand of Americana is earnest and uplifting, an open handreaching through the inherent melancholy of the genre, while his voice ringswith echoes of Chris Stapleton and Bob Seger.” ~ Annie Bacon | The Bay Bridged Apr, 5, 2018