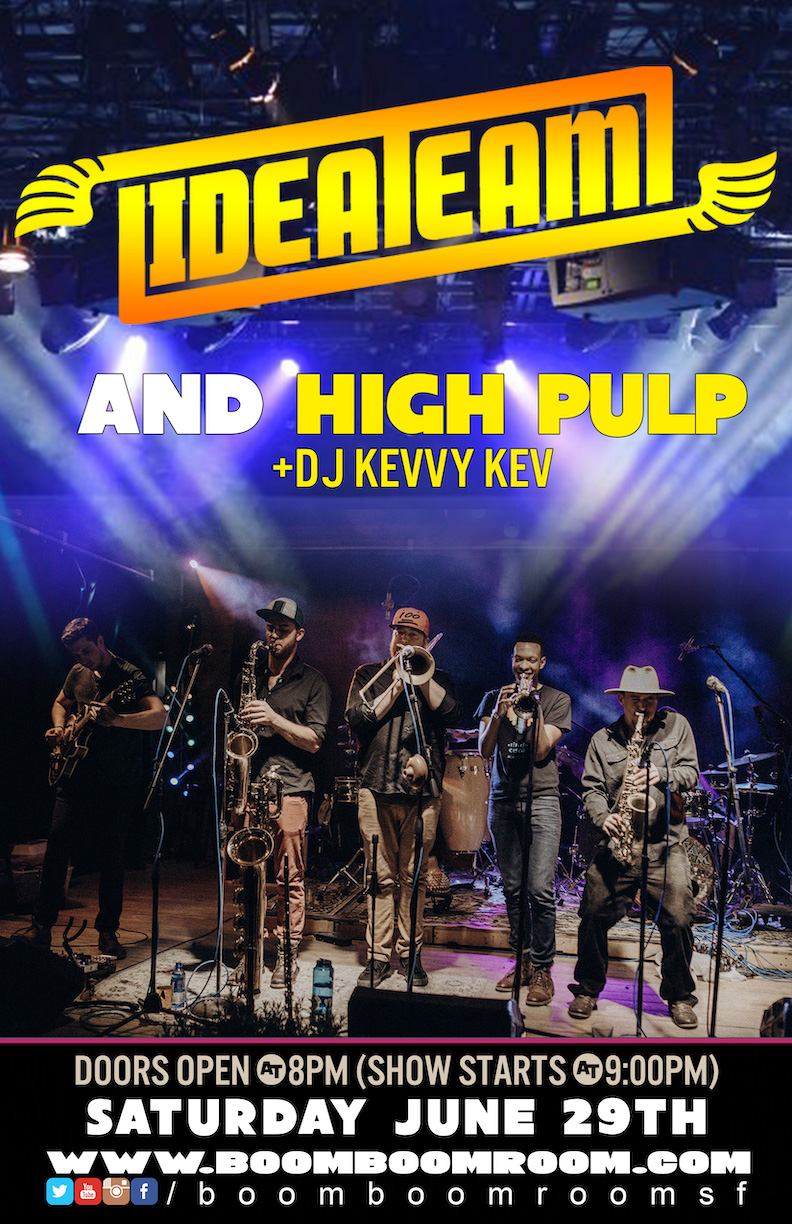 IDEATEAM
IDEATEAM is a hefty chunk of soul funk. They dare you not to sway, as brass melodies swirl with guitar rhythms, with a deep pocket thump that is stronger than a 6 am cocktail. With a vibrant percussion element, Ideateam brings an onslaught of grooves, exploring both instrumental and vocal arrangements, sure to make you turn to your friend and say, “Hot damn, I can’t believe I never saw this band before!”

Ideateam is a 9-piece ensemble driven to fuse many influences together in afresh way. Loaded with two guitars, bass, drums, percussion, brass section, and soulful vocals, the group explores the corridors of groove while flipping through styles like a deck of cards, flowing in and around various genres, noticeably leaning on the funk. They brings sounds old and new, blended with a few drops of extraterrestrial soundscapes – presented by a group of people who simply love to play music. Ideateam has shared the stage with several festival/ tour circuit favorites (Orgone, Polyrhythmics, Kyle Hollingsworth Band, Monophonics, Rubblebucket, Scott Pemberton Band...) and has been honored to open for legends such as Bernard Purdie and The Headhunters. Their latest album hit with huge acclaim in 2018. The group seeks to continue evolving the live music experience they are quickly becoming known for, and further cultivating a positive connection with people through music.

HIGH PULP
Born out of a basement in Seattle’s Greenwood neighborhood in 2015, High Pulp has been taking Seattle by storm. Obsessive attention to compositional detail and unique song structures characterize the band’s winding music. Effortlessly fusing diverse influences from jazz to funk and hip-hop to punk has lead High Pulp to call it’s music Future Funk Fusion – a melding of the past to create something distinctly cutting edge.

In March of 2017, High Pulp began playing weekly shows at Seattle’s revered jazz club The Royal Room, facilitating the development of deeply engaged in-the-moment conversations between members. As the band grew its ability to express and improvise in the live setting, the buzz grew stronger. Since High Pulp initially broke onto the scene, the band has already played to packed rooms at some of Seattle’s most prominent venues such as Neumos, The Tractor, and The Crocodile, as well as playing festivals such as Upstream, BAMF, and Big Bldg Bash.

In January of 2018, the band entered the ’studio’ (a friend’s cabin on Whidbey Island) with Jason Gray (Polyrhythmics) to record their debut album ‘Bad Juice’. Featuring 8 songs, ‘Bad Juice’ is High Pulp’s manifesto – taking the listener on a series of unexpected turns and all the while inducing subconscious head-bobbing. At its core, this is a band of adversaries – the moment that High Pulp seems to fit into a ‘genre’, it will be immediately shattered.