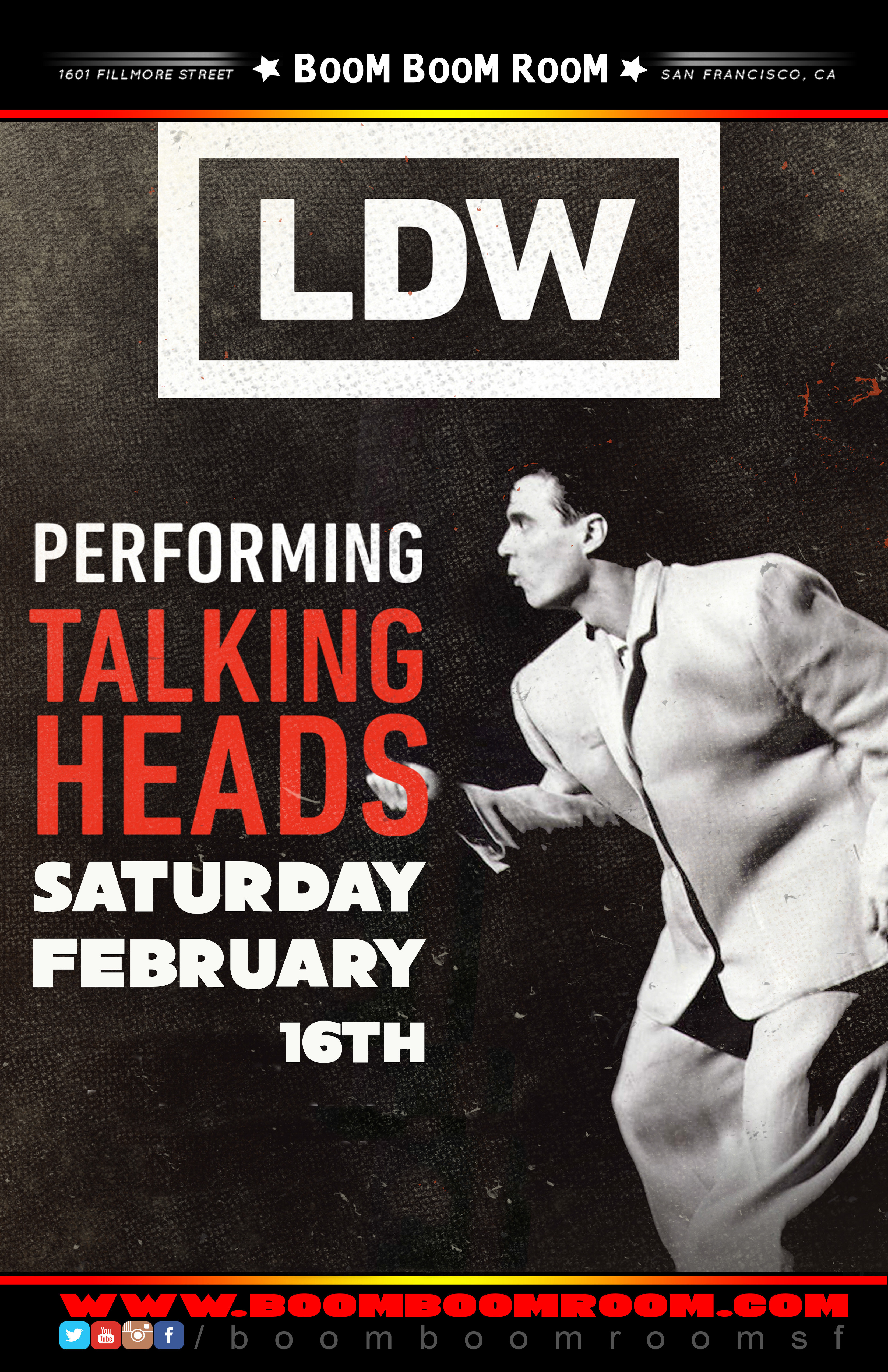 In the summer of 2013 a group of Portland, Oregon musicians got together around the love of Talking Heads music.  Especially that of the epic 1984 concert film, Stop Making Sense, which they consider to be the most brilliant concert film of all time. They began to perform with a 7-piece lineup that was inspired by that particular movie and time period.

“There was so much funkiness, movement, and excitement to the music in that movie and we just knew it would get people excited and feel fresh” says Lawrence Orleck, founder and singer in the band.

Not only for their exuberant interpretations of the legendary Talking Heads, but also for their original music, improvisation, choreography and the random experiences they deliver at every one of their shows. In a matter of 2 years they were playing to sold out shows all over the west coast and found themselves with the question: “What’s next?”

For LDW, every performance matters and needs to evolve, and, it’s that mantra that has them in the studio recording their first vinyl EP, Movement in a spirited manner Vol 1. “We were so inspired by playing David Byrne’s music for 3 years that we found ourselves in the studio writing this EP and it just naturally fit into our set. That’s our evolution and trajectory. But, yes, we still play a ton of talking heads because, plain and simple, it’s fun.”

The new EP is Vol. 1 of a three part series of EP’s that LDW plans to release. “The album format is so flexible these days and, frankly, a bit irrelevant so we decided to just do these two sided vinyl EP’s with 4 songs each. This first one will be coming out February 2018. We named it Movement ina spirited manner because for the last 3 years we have been enthralled with the excitement and motion of our fans. They get down, big time.” Lawrence muses.

Stop Making Sense performances:
“We also thought it would be an incredible adventure to puttogether, periodically, the actual Stop Making Sense performance. It’s aconcept that starts with ostensibly no stage setup and out comes David Byrnewith a beatbox and and an acoustic. The stage slowly builds to a fullperformance as the players and gear ebb onto the stage – until a mid showclimax with Byrne in a giant suit. It’s great fun to honor the performance thatwas the nucleus for this project.”

The most in demand Blues/Funk Trio in Northern California!!BiographyJake Nielsen is the hottest new act in the blues scene! He’s been making his way through the West Coast making lasting impressions on everyone that watches his talent, and inspiring with his passion!
Born on march 29 1985. Jake was born with cerebral palsy, limiting the use of his legs. He was always determined to never let that bring him down, so he lived a very active life as a young kid and participated in every sport he could. He played wheelchair basketball, and was the inspiration to start a baseball league for children with special needs.
Jake comes from a family that has a long line of professional cowboys. He grew up in the rodeo scene and wanted to ride calves at a very young age. He was the only cowboy that couldn’t walk and was an instant hit. Soon he was sponsored to ride all over the west coast and made a lot of buzz in the media. There were newspaper articles and magazine write ups on him, he gained a lot of respect and inspired a lot of people at a very young age. He did this until he was 13 years old.
Sometime during his adolescence he discovered music. He was 15 when he first started playing guitar, and caught on very quickly. He was 17 when he formed his first reggae/rock band FUBAR. Together this band accomplished a lot. They played in many different festivals, and opened up for many great bands like Passafire, Ballyhoo, Opio, Isreal Vibrations, Mike Pinto, Rebelution and many more. They won the Monterey Battle of the Bands in 2007 and a Swagg Award for best reggae album in 2010. Things didn’t work out for FUBAR, they parted ways in 2010, but Jake stayed busy playing with many local talented musicians and attending Pro Jams while recording his first solo album “Jake Nielsen’s Triple Threat” with is music mentors Chris Weinress and Derrick (D’Mar) Martin which is available on Itunes. Generating a lot of attention for his live performance, with so much energy and funk you have to get out of your seat and dance! With this album Jake played all over California, opened for big names such as Elvin Bishop, Roy Rogers and Travis Warren of Blind Melon. And also making his international debut in Canada, Also his song ‘Drinkn Blues’ was featured in a short film called Bondi Blues with Dan Aykroyd.
These days Jake is touring with Kyle Talty on drums and Dave Palmer on bass, two of his oldest jamming buddies. Together these three have accomplished many great things! And also bringing back his reggae roots between the funk and blues! But the style they have never changes, its always an ‘In your face’ style, guaranteed to make you get up and dance! Working with Kyle and Dave, they have opened for big names such as Collie Buddz, Shwayze, The Holdup, Indigenous and Papa Mali. They have also headlined festivals, have made appearances on T.V, magazine and newspaper articles and radio shows, and have many monthly show dates at big name clubs in the Bay Area.