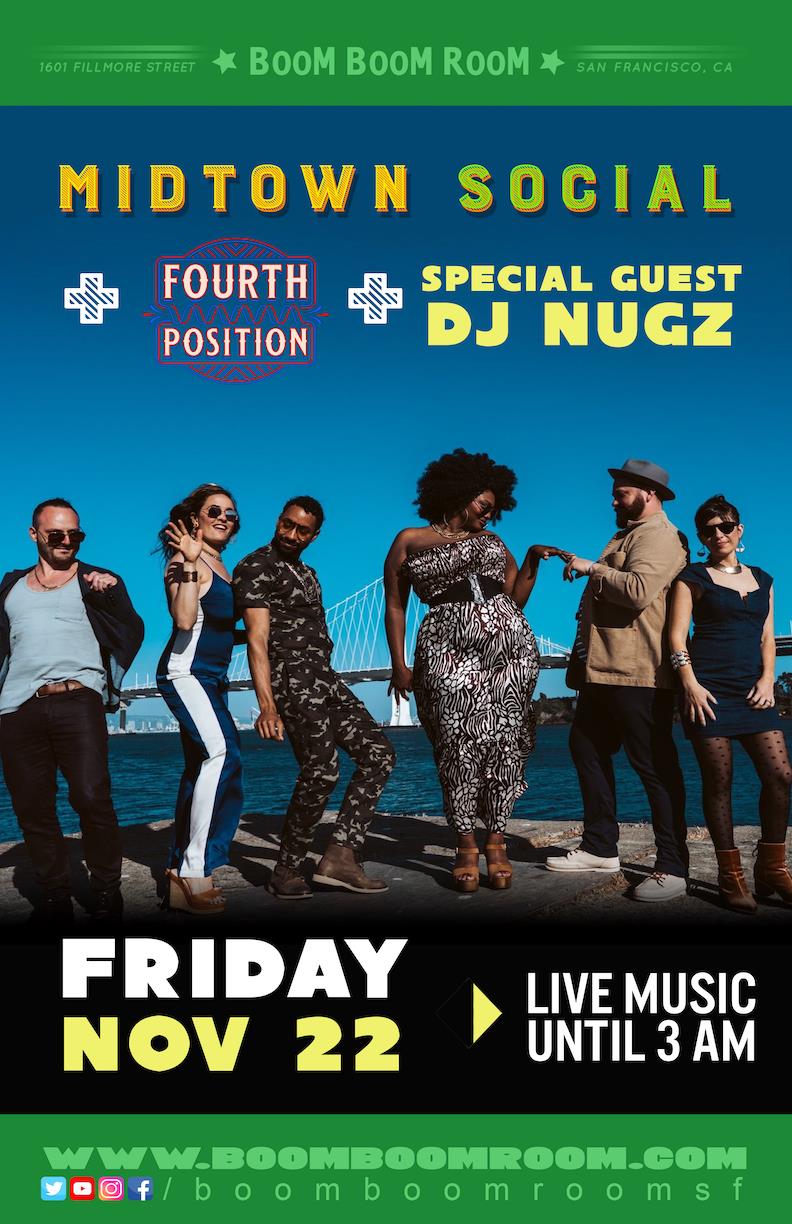 MIDTOWN SOCIAL
In a city that thrives on its diversity, sun-soaked California retro-soul band Midtown Social unites a fractured San Francisco undergoing swells of monumental change with an uplifting and outright funky new full-length studio album, Fantastic Colors, due out nationwide on Valentine’s Day 2020. Midtown Social is of the fabric of San Francisco with its members representing the wide swathes of what makes the city so extraordinary. For its latest studio recording co-produced by Jeff Kolhede (Money Mark, Alphabet Rockers), Midtown Social writes a love letter to its hometown amid a perilous time when reverence is essential for collective healing. Drastic income disparity, sky-rocketing rents, profound homelessness, acute drug abuse, among other critical issues, are rendering the city unrecognizable. On Fantastic Colors, Midtown Social offers a compassionate reflection of its true love for San Francisco.

Joseph Carter (The Humidors, Sans Pablo) studied Vocal Jazz in high school and college and has been performing in Maine, Nashville and The Bay for twenty years. He brings soulful vocals and a smooth approach to the bands growing repertoire. His stage presence is electric and infectious!

Jordan Sookikian is lead guitarist and riff-master. His funk-influence is prominent in his playing, where different elements of Jimi Hendrix, Eddie Hazel, and John Frusciante come out through each phrase he plays.

Jon Levine keeps the groove on the bass. Although he still tells people that he “plays guitar”, Jon not-so-secretly loves holding down the low end. He previously played in Bay Area band Whippoorwil, and is now in Corduroy, a Pearl Jam tribute band.

Veteran keyboardist Driftwood could pick out tunes on the piano with 1 finger starting at age 4.  Now he uses all 10 fingers and occasionally both feet. He boasts of a long and varied musical career, having been kicked out of bands of so many genres —  blues, funk, soul, folk, classic and alt rock — it’s hard to keep track. His latest passion is playing acid jazz on the mighty Hammond B3.

Chris Gamper, drummer extraordinaire!
In complete protest of all things boring and boredom related, Chris Gamper can be seen playing big drums, small drums, loud drums and quiet drums at a number of fine San Francisco Bay Area establishments. “I’m especially proud to be a part of bands and play with musicians that are writing, recording and performing original material and unique arrangements of other composers. I can create my own musical vocabulary by developing a sound and style just for that band. My passion for drums and new gear then allows me to really bring to life the sound I am envisioning.”

DJ NUGZ
Brian Cox, known around the San Francisco bay area as DJ Nugz, Nuggets, Nugzie, B Nugz, Nugalicious, Nougatino, Dr. Nugz, or Judge Nuggalito began his career in music when he acquired his first turntable at the age of 5, making “pause button” mix tapes at the age of 10, and getting on a set of Technics 1200 MK2 turntables a few years later. He now has over 20 years experience in the booth. While living in Boulder, CO in the 90s, Nugz gained two distinct achievements. He acquired residencies at Soma in Boulder (voted as one of the top ten clubs in America by BPM and several other dance music publications ), and the number one club in Colorado at the time, Vinyl (formerly 1082 Broadway in Denver). Nugz consistently played with profound success at both of these clubs until they closed, along with numerous others in the Denver /Boulder area while still at a very early point in his career.

Brian moved to SF in 2004, and when he isn’t traveling to places like Mexico, Argentina, Berlin, the Miami Winter Music Conference, New York, Vegas, or Burning Man (DJ’d for last 12 yrs), he can be heard performing in prominent SF nightspots such as Mighty, Public Works, Ruby Skye, Mezzanine, Yoshi’s, and the legendary 1015 Folsom. He made his mark creating late night underground soirees at a special little space know as “123”, with his production company Footprint Sound. These are regarded by true nightlife professionals as some of the best parties in SF. He continues to produce weekly and monthly events all around the bay, and during these nights and early mornings he shares the booth with the likes of Donald Glaude, Lee Burridge, Modeselektor, BT, Tycho, Martin Buttrich, Lee Coombs, Elite Force, Deekline, The Scumfrog, Audiofly, and Sander Kleinenberg to name a few.
He is able to blend drastically different beats from all sorts of genres, tell a story, and create a sound/vibe that are truly his own. A risk taker who “owns it”, works in heavy, moving, melodic basslines, unexpected builds and drops, sometimes dirty sometimes bouncy, seamless transitions from the “four on the floor” beat of house to “on the one” slowed down breaks and back again.