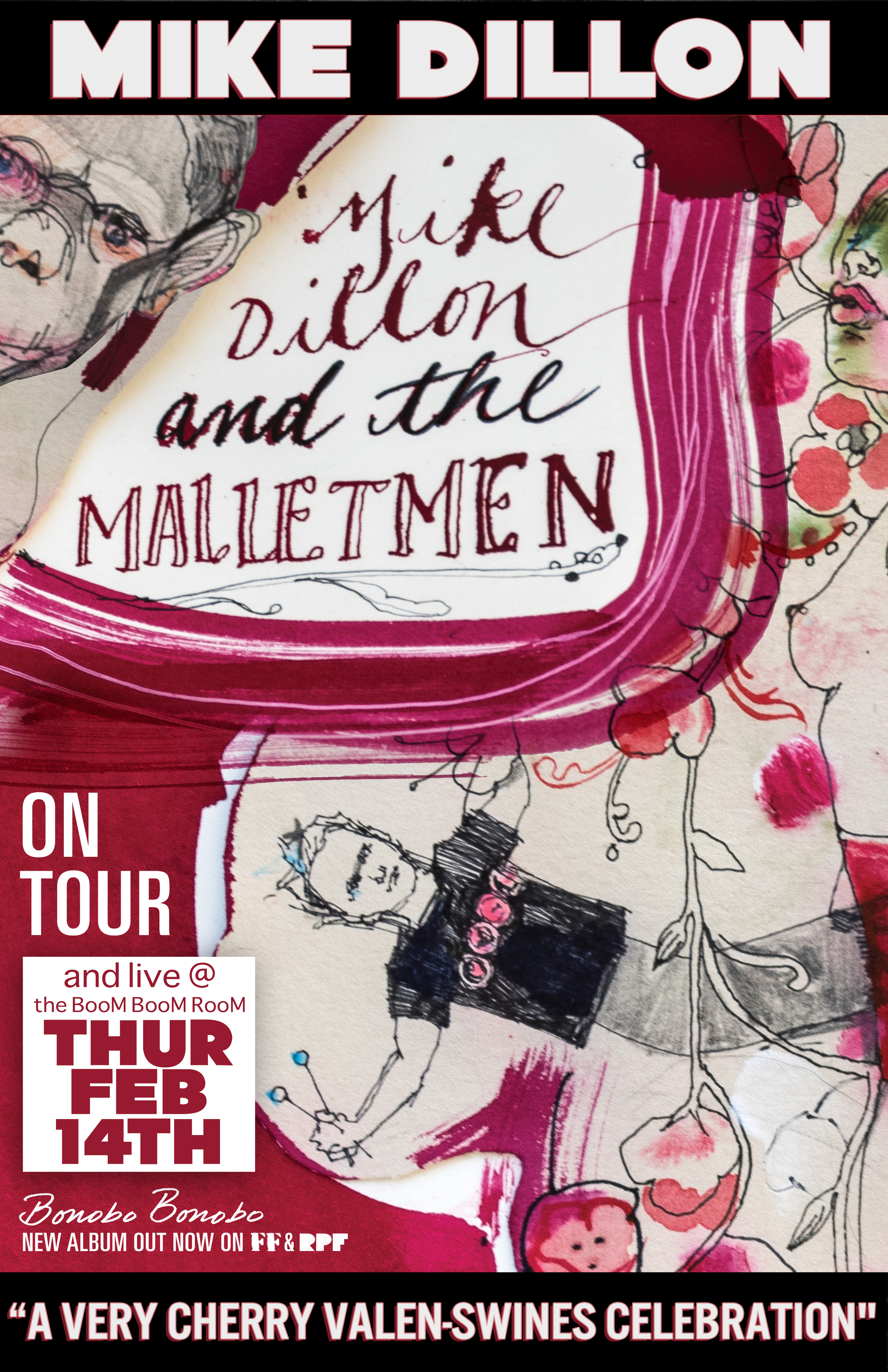 with Special Featured Lead Singer (of the GIVERS)
* TIF Lamson *

Direct from New Orleans to the Boom Boom Room in San Francisco for a HEART-BREAKER of a Show:

How many artists have been praised a “punk rock provocateur,” “jazz vibraphone visionary,”and “percussion virtuoso” in the same sentence? There’s only one: Mike Dillon. Whether through his affiliation with artists like Les Claypool, Primus, Rickie Lee Jones, and Ani Difranco, or collaborations such as Nolatet, Garage a Trois, The Dead Kenny G’s, Critters Buggin or bands he has led, including Mike Dillon Band, Mike Dillon’s New Orleans Punk Rock Percussion Consortium, Billy Goat and Hairy Apes BMX, the Texas-native has set his own standard for 25 years now. Over the past decade, Mike Dillon has released a number of acclaimed albums, intertwining a range of influences from Zappa-esque eccentricity to Fishbone punk funk, D.C. Go-Go to Milt Jackson-influenced vibraphone majesty. Never before, however, has he recorded music so personal and committed to a sustained mood as his latest album, Functioning Broke. The recording finds Dillon solo on vibraphone and various percussion, building each track into its own minimalist, but multi-dimensional auditory landscape.

The current version of the Mike Dillon Band features guitarist Cliff Hines, Bassist Nathan Lambertson and a rotating cast of drummers including Claude Coleman Jr. (Ween), Simon Lott, G. Maxwell, Doug Belote and Paul Thibodeaux. With this line up, Dillon has continued exploring the connection between New Orleans street beats, Ska, funk, Hardcore and jazz. The band will release a new record in February 2017 titled, “Life is not a Football.” Produced in New Orleans by Richard Maloney and Dillon with engineers Rick Nelson and Robert Mercurio, this album sounds like a Spotted Cat trad band that grew up playing Dead Kennedys and invited Captain Beefheart over for a dinner cooked by Thelonious Monk. The Mike Dillon Band has supported acts like Galactic, The Revivalists, Clutch, Primus, and Fishbone, while continuing to play music festivals and in cities across the U.S.

Since breakout 2011 release In Light, GIVERS have embraced a vision of life and love that, in the band’s early years, bubbled with the optimism of unchallenged youth. Ever the disciples of movement, GIVERS channels Afro-pop polyrhythms and art rock collage into raw, transcendent joy.
From the jump, the band achieved dizzying success. GIVERS toured world class stages, both international and domestic, becoming a fixture on the major festival circuit, including Bonnaroo and Lollapalooza, and winning appearances on Late Night with Jimmy Fallon and Jimmy Kimmel Live! (The band’s electricity struck Neil Young, who caught GIVERS on Late Night and mused about it, in a stream of consciousness, in his autobiography.)
Now each in their early 30s — ragged, accomplished, philosophized — the band’s creative nucleus of Taylor Guarisco, Tif Lamson, and Josh LeBlanc has transitioned from celebrating life to probing its complications: the cruel fiction of unmet expectations, the deflation in opportunities lost and the elation in new ones found. In the process, they left the place of the band’s birth (Lafayette, La.) for the cultural kaleidoscope of New Orleans, now the site of their coming of age.