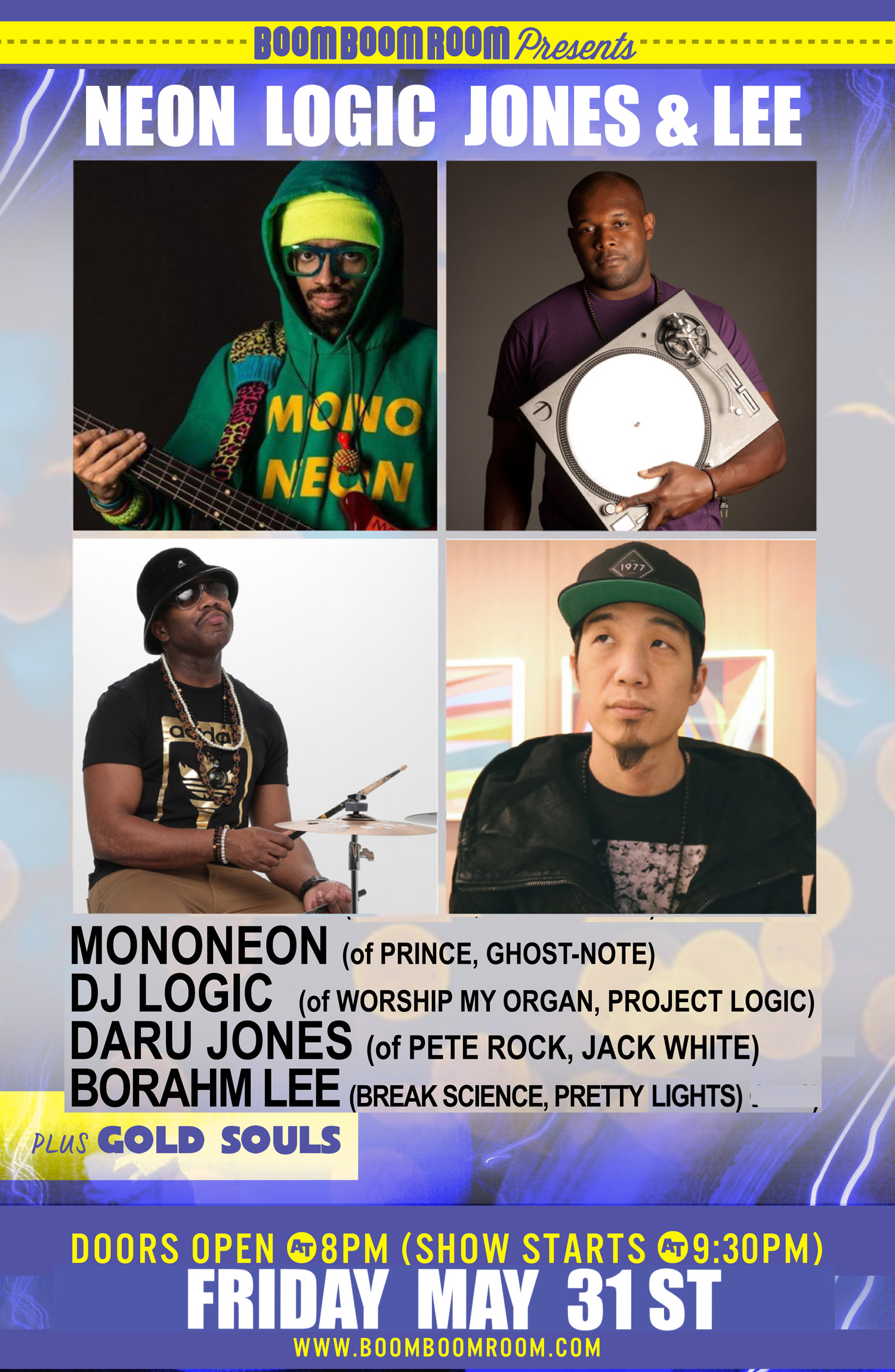 plus Special Guests:
THE GOLD SOULS

MonoNeon
(Bassist/Prince, Ghost-Note)
Dywane Thomas, Jr.  also known as MonoNeon, is an American bassist and experimental musician. He is known for his presence on YouTube playing bass guitar and known for being one of the last people to work with Prince. Thomas also played with Grammy Award-winning R&B artist, Ne-Yo, on his fourth studio album. He is a native of Memphis, Tennessee.

DARU JONES
(Drummer/Producer, Jack White, Pete Rock, DMD the vibes)
Daru Jones is one of the most respected drummers of his generation. Born to two professional musicians, he began playing the drums at the age of four. Though he got his start in the church, Jones has been influenced by musicians from a wide range of genres. These eclectic musical tastes have carried over into his own career as he has recorded, performed, and toured with renowned artists and producers such as: Jack White, Slum Village, Talib Kweli, Black Milk, Dwight Yoakam, Jamie Lidell, Pete Rock, Salaam Remi, Gloria Gaynor, Kim Burrell, Rance Allen, Black Violin, Ski Beatz & The Sensei’s, Lorenzo Jovanotti and Jon B (partial list). Alongside these artists, Jones has graced the stages of some of the most revered events in the music industry, including: One Mic: Hip-Hop Culture Worldwide! A 20th anniversary celebration of Nas debut album Illmatic, the 2013 Grammy Awards, Austin City Limits, Rock The Bells Festival, and the Montreux Jazz Festival. Receiving rave reviews from: Rolling Stone Magazine, LA Weekly,and USA Today (partial list), he has also appeared on several national and international television programs: The David Letterman Show, Jools Holland (UK), The Colbert Report, Saturday Night Live, and MTV.Jones has been the “go-to-drummer” in the hip hop game for over a decade. He has shared the stage with legends and emerging stars alike, including: Black Moon, Smif N Wessun, Q-Tip, Mos Def, Raekwon, Curren$y, Pharoahe Monch, Jean Grae, Black Sheep, Digable Planets, Camp_Lo, Smoke Dza, Theophulis London and Large Professor.

The theorem of turntablist as musician has been long proven in the capable hands of DJ Logic, whom with jazz as his foundation has become a wax innovator by crossing genres and mixing his sound across the map. As one of the world’s most accomplished turntablists, DJ Logic is widely credited for introducing jazz into the hip–hop realms and is considered by most as a highly-respected session musician and an innovative bandleader.
Since his emergence in the early nineties amidst the Bronx hip-hop scene, the New York City based deejay has been amassing a veritable mountain of collaborations, including a full-fledged band with members of Blues Traveler (The John Popper Project ft. DJ Logic), a trio with Steve Molitz &amp; Freekbass (Headtronics), a jazz project with Georgian prodigy Beka Gochiasvili, and as a member of Grammy-winning Arturo O’Farrill &amp; The Afro Latin Jazz Orchestra’s The Offense of the Drum album. He also has a long list of other collaborations with artists ranging from the likes of Bob Weir, John Mayer, Medeski Martin and Wood, Christian McBride, O.A.R., Carly Simon, Marcus Miller, Jack Johnson, Vernon Reid, Warren Haynes, Charlie Hunter, Jack DeJohnette, Ben Harper, Mos Def, The Roots, Bernie Worrell, Bill Laswell, Melvin Gibbs, Fred Wesley, Sean Kuti and many more.
DJ Logic and his role as an electronic-music ambassador keeps him at the top of his game. Whether the scratch artist instructs tablas to flirt with drum ‘n’ bass (such as on his Nina Simone and Billy Holiday remixes found on Sony Legacy’s Remixed and Reimagined volumes), meshes free styling MC’s with Afro-Cuban rhythms (such as on ‘Share Worldwide Funk’ – a remix produced for Jack DeJohnette and Golden Beams Collected, Volume 1), or remixes tracks for rock bands such as Moon Taxi, DJ Logic can always be found paying homage to his predecessors while contributing his vision to the deejay genre.
While the context of his work may vary, DJ Logic’s spinning skills are definitely beyond reproach. He works with a phenomenal roster of invited guests, and he knows how to pick his collaborators as well as his samples. With a growing catalogue of recordings under his belt, DJ Logic’s supreme musicianship and eclectic tastes will allow him to journey wherever an infectious groove may take him.

Borahm Lee makes up one-half of the electronic duo Break Science. His chops as a keyboard player are undeniable, but he flexes his skills way beyond the keys. His live-sampling trip-hop-meets-dub fuses with musical partner Adam Deitch’s breakbeat-style drumming — and the crowd goes wild. The pair met when Deitch was collaborating with Wyclef Jean, and Lee was working with Lauryn Hill. Before starting his own band, Lee played keys with superstars like Kanye West, Lauryn Hill and Matisyahu. He is currently the keyboard player in Pretty Lights and does his own solo DJ sets that showcase the new music that he’s made along with tunes that have been inspiring him lately.

The Gold Souls are bringing the driving grooves of funk, the rich textures of soul, and the compelling storytelling of the blues to the Northern California scene and beyond. Drawing from a variety of influences and experiences, they deliver captivating lyrics and fresh arrangements over a vintage sound.

Led by the dynamic Juniper Waller, the group is made up of young talent hailing from the Bay and Sacramento areas. With Matt Hevesh on guitar, Alex Severson on the keys, Billy D. Thompson on the drums, and Jace Dorn on bass, each member has a hand in writing and song composition, making The Gold Souls a truly collaborative effort.

The Gold Souls burst on the Sacramento music scene in early 2017, and are swiftly becoming one of the most promising new talents in the area.

They released a self- titled five song EP in May of 2017 and went on tour down the California coast soon after. Their next single, “Nobody,” was released in late 2017 and was featured on Apple Music Blues’ Hot Tracks list. They released their full length album “Good To Feel” on June 22, 2018.

Their latest single, “True Blue” was produced/engineered by multi-Grammy winner Timothy Bloom and was released February 12, 2019. It will be followed by a spring tour to New Orleans and back.