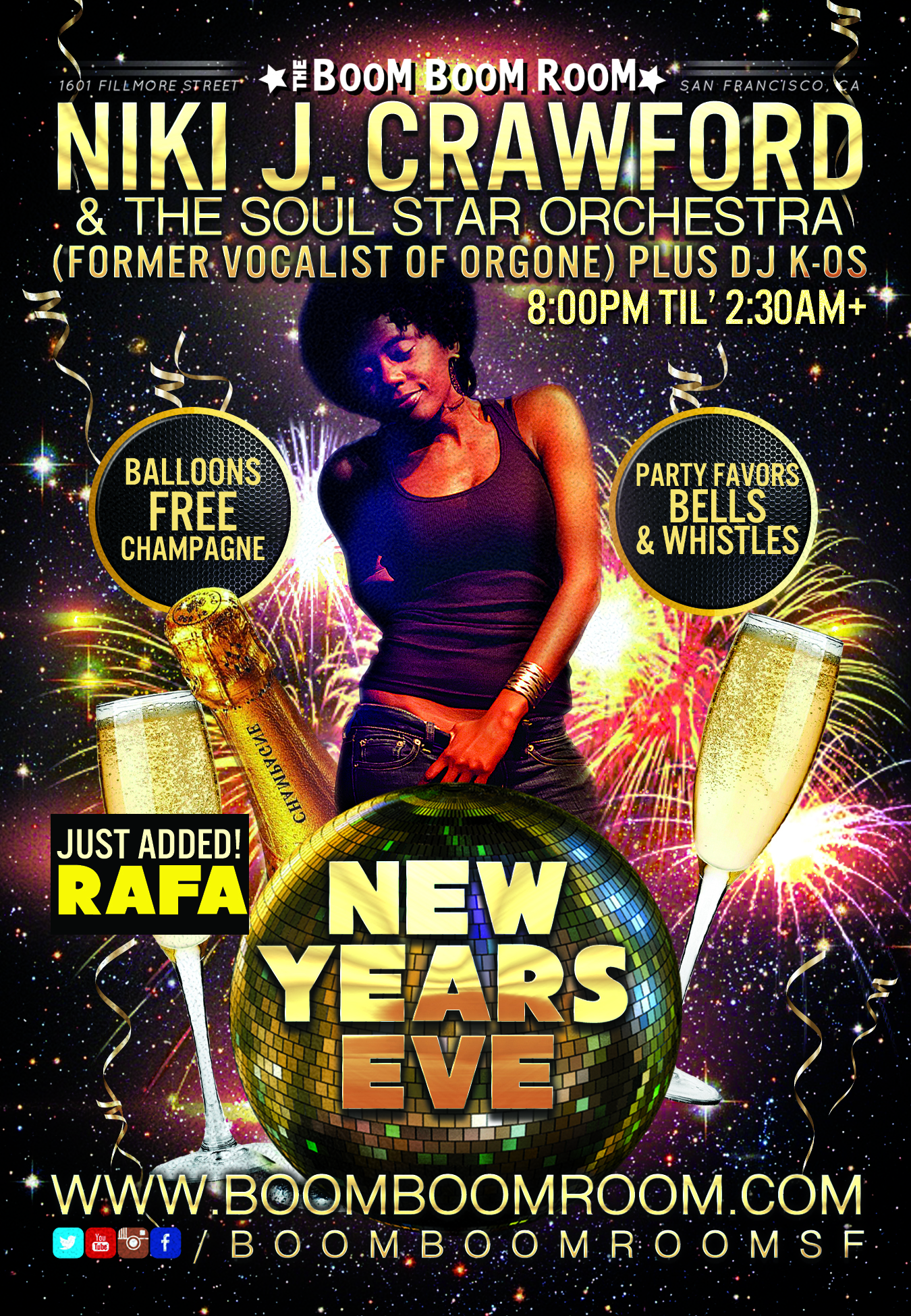 Come Celebrate the New Year with the Funkiest Soul singer and her band formerly of Orgone:

… “The Best Party in San Francisco on New Years Eve” …
Each and every year (for over 20 years in a row), the BBR is the place to be on New Year’s Eve!
Without exception, this is the MOST POPULAR EVENT in SF and always sells fast, so GET YOUR TICKETS TODAY!
BooM BooM RooM’s New Year’s Eve Party is simply a blast…

The BBR is decked out and sparkling with candles, glittery decorations, hundreds of balloons, complimentary NYE party hats and party favors, champagne and the best legendary live music performances with super star headliner bands playing til 3am+.  The atmosphere is electric and the cocktails are flowing as we create the most exciting and funky NYE experience for all of the party people in the know.

– More than 500 Hundred Balloons strewn across the entire ceiling throughout the club.
– Funkiest, Dance-Driven Live Music with legendary All Star musicians, bands (and Djs).
– Cases of Champagne flowing all night (and FREE champagne at midnight)
– Party Favors, Hats, bells and whistles…
– Free Champagne in our epic toast at Midnight!
– Keepin’ this live music party poppin’ and the dance floor hopping all night long til at least 3:00am+…

*** Get into this party and celebrate with the hottest and fastest rising star on the scene today… direct from Los Angeles.. former vocalist for Soul Funk sensation Orgone… ***

The STAR OF THE SHOW… The FABULOUS and SENSATIONAL:

After performing more than 200 shows worldwide as the lead vocalist for west coast funk and soul outfit “Orgone”,  Niki J Crawford’s new band bring the heat with a high energy funk and soul party that is guaranteed to leave everyone with a positive and memorable impression.

Niki is an American Recording Artist/Songwriter from the small country town of Springhill, Louisiana with a powerful, unforgettable and melodic voice. The singer/songwriter crafts poignant lyrics and creates music with a Soul-Funk-R&B sound that you can feel. Niki has been singing since she was 6-years-old. From her roots as the lead soloist in her hometown church choir to the recently completed touring, her talent has continued to evolve as one of the strongest voices in music.

Niki and the band have shared the stage and have played with Carlos Santana, Snoop Dogg, Al Green, Sharon Jones & the Dap-Kings, Aaron Neville, Macy Grey, Booker T Jones, The Roots, Keb Mo, Galactic and Orgone just to name a few of the legendary performers who have sought out her talent. She has performed on various late-night TV shows such as Jay Leno, David Letterman, Conan O’Brien, and Saturday Night Live and lit up festival stages across the world like Bonnaroo, Wakarusa, Montreal Jazz, Summer Camp, Bear Creek, All Good, High Sierra and Jam Cruise.

plus opening band:
* RAFA’S ONE MAN BAND  AND FRIENDS *

Rafa has been playing in San Francisco and the Bay Area for close to 10 years, and can be seen regularly at the Boom Boom Room, Amnesia, the Revolution Cafe and house parties all over the city. He recently completed his first tour of the East Coast. Over the years, His groove based looping opened a door for a rotating cast of amazing musicians to sit in, and nowadays he’s just as often leading the charge in front of 5 other musicians as he is performing solo, behind a rack of keyboards, his electric guitar and a microphone. From rock to funk, reggae and afrobeat, soul and house, Rafa keeps your feet thumping and your booty shaking. Originals filled with deep improvisation, and wide ranging covers from The Pharcyde to Fleetwood Mac, from Talking Heads to Nine Inch Nails, from Phish to Beyonce – Anything that has a groove is fair game!

Legendary DJ (of Digital Underground) kicks the party off at 8pm and spins between band sets ~ keepin the party bumpin!