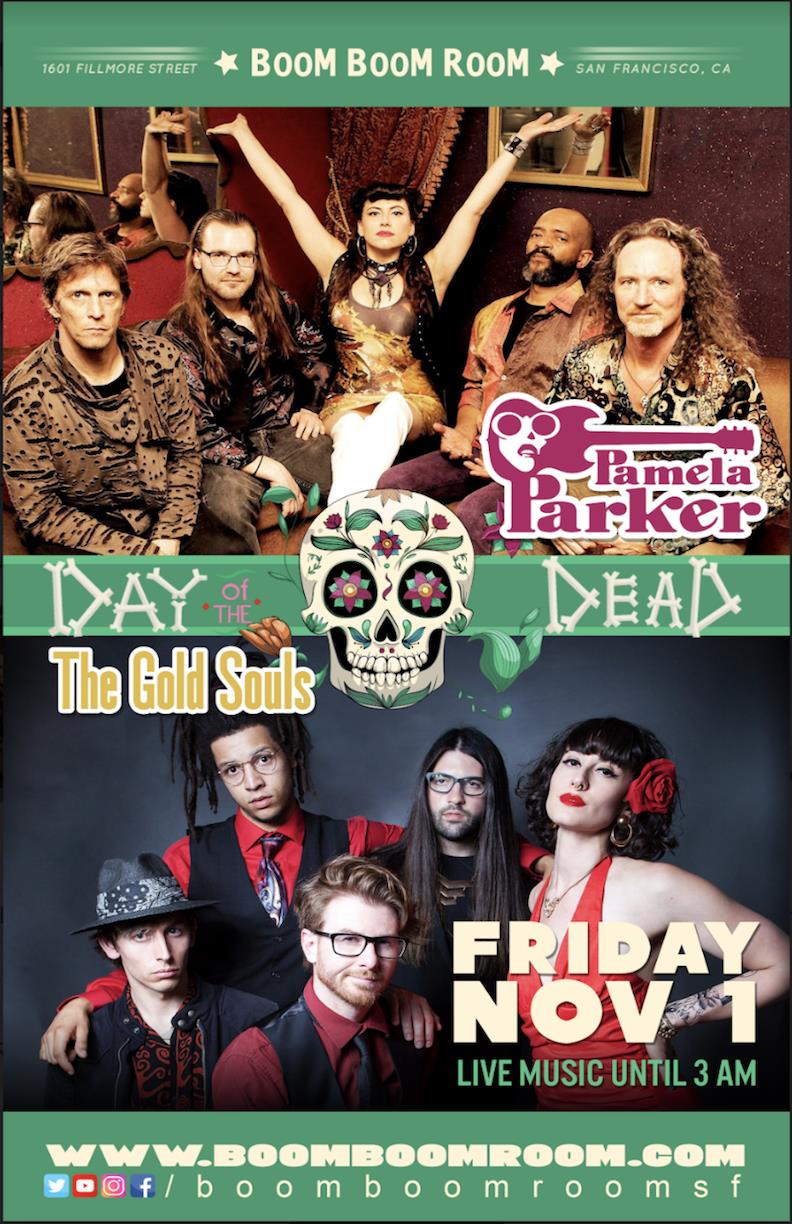 November 1st at Boom Boom Room is Dia De Los Muertos and the day after Halloween.  For this reason we will be having a costume contest.  No need to put that costume away so soon.  Come dressed in an amazing and creative costume for your chance to win!!!  The winner of the costume contest will be getting a free merchandise bundle from both bands including from Pamela Parker’s new music The Fantastic Machine you’ll receive: the new album, the past 2 albums, a band t-shirt, a band button of choice and a pick of any poster art in our poster book to take home with you.

PAMELA PARKER’S FANTASTIC MACHINE
Pamela Parker creates rock n’roll chemistry by blending sultry soulful vocals with powerful rock anthems. Pamela’s voice is described by Program Director of CHLY, Steve Levington, as a combination between Ann Wilson and Axl Rose.  The band has built a sound on their dynamic stage presence and commanding vocals that can drive you, make you dance, or take you on a journey.  The new album, The Fantastic Machine, creates a fresh rock n’roll landscape with a wide range of surprising touchstones like Aretha Franklin, Thin Lizzy, Funkadelic and Heart.  Their songs reflect the struggles of life, love, the rock n’roll business, and the pursuit of spiritual happiness.

Pamela Parker has had the pleasure of sharing the stage with people like George Clinton & P-Funk, Tea Leaf Green, she’s a regular featured artist with Guitarmageddon, and she is former member of Ronkat’s Katdelic.  Pamela has been fronting her own rock band for many years opening up for bands like Heart, Big Brother & The Holding Co., Dark Star Orchestra, and she’s headlined the Haight Ashbury Street Fair twice. Ryan Hickey, the bands music director and keyboardist/vocalist, has toured the US and Asia playing with bands like Junior Marvin (Bob Marley, Stevie Wonder), Stu Allen (Phil Lesh) and has worked with Sammy Hagar (Van Halen). PPFM features Spence Murray, former member of Kofy Brown, on bass.  Chris McGrew drives the grooves on drums and was former member of Griddle. On background vocals is Amber Fitzgerald, also known as Funky Fitzy, who brings that R&B swagger to the sound. Our horn section includes Chris Hoog on Saxophone, a touring member of Afrolicious, Smoked Out Soul, Orchestra Gold & Wiskerman. Hoog sure knows how to bring the funk and he once at an entire brick of Wasabi!!!  On Trumpet, we will be featuring Anthony Ant, who curates and leads some of the best weekly funk jams in the Bay Area, is a member of Oakadelic, and has played with Collectivity, La Misa Negra, Sal’s Greenhouse & Angelo Moore’s Mad Vibe Orchestra, to name a few.

Friday, November 1st, Pamela Parker’s Fantastic Machine will be mixing up the rock, funk and soul music to bring you some ReD Hot PurPLe FuNK RocK tHat’ll SoOth yoUr SouL & Make yOu grOoVe.

Bring your costume game for your chance to win big!!!!!!!

THE GOLD SOULS
The Gold Souls are bringing the driving grooves of funk, the rich textures of soul, and the compelling storytelling of the blues to the Northern California scene and beyond. Drawing from a variety of influences and experiences, they deliver captivating lyrics and fresh arrangements over a vintage sound.

Led by the dynamic Juniper Waller, the group is made up of young talent hailing from the Bay and Sacramento areas. With Matt Hevesh on guitar, Alex Severson on the keys, Billy D. Thompson on the drums, and Jace Dorn on bass, each member has a hand in writing and song composition, making The Gold Souls a truly collaborative effort.

The Gold Souls burst on the Sacramento music scene in early 2017, and are swiftly becoming one of the most promising new talents in the area.

They released a self- titled five song EP in May of 2017 and went on tour down the California coast soon after. Their next single, “Nobody,” was released in late 2017 and was featured on Apple Music Blues’ Hot Tracks list. They released their full length album “Good To Feel” on June 22, 2018.

Their latest single, “True Blue” was produced/engineered by multi-Grammy winner Timothy Bloom and was released February 12, 2019. It will be followed by a spring tour to New Orleans and back.