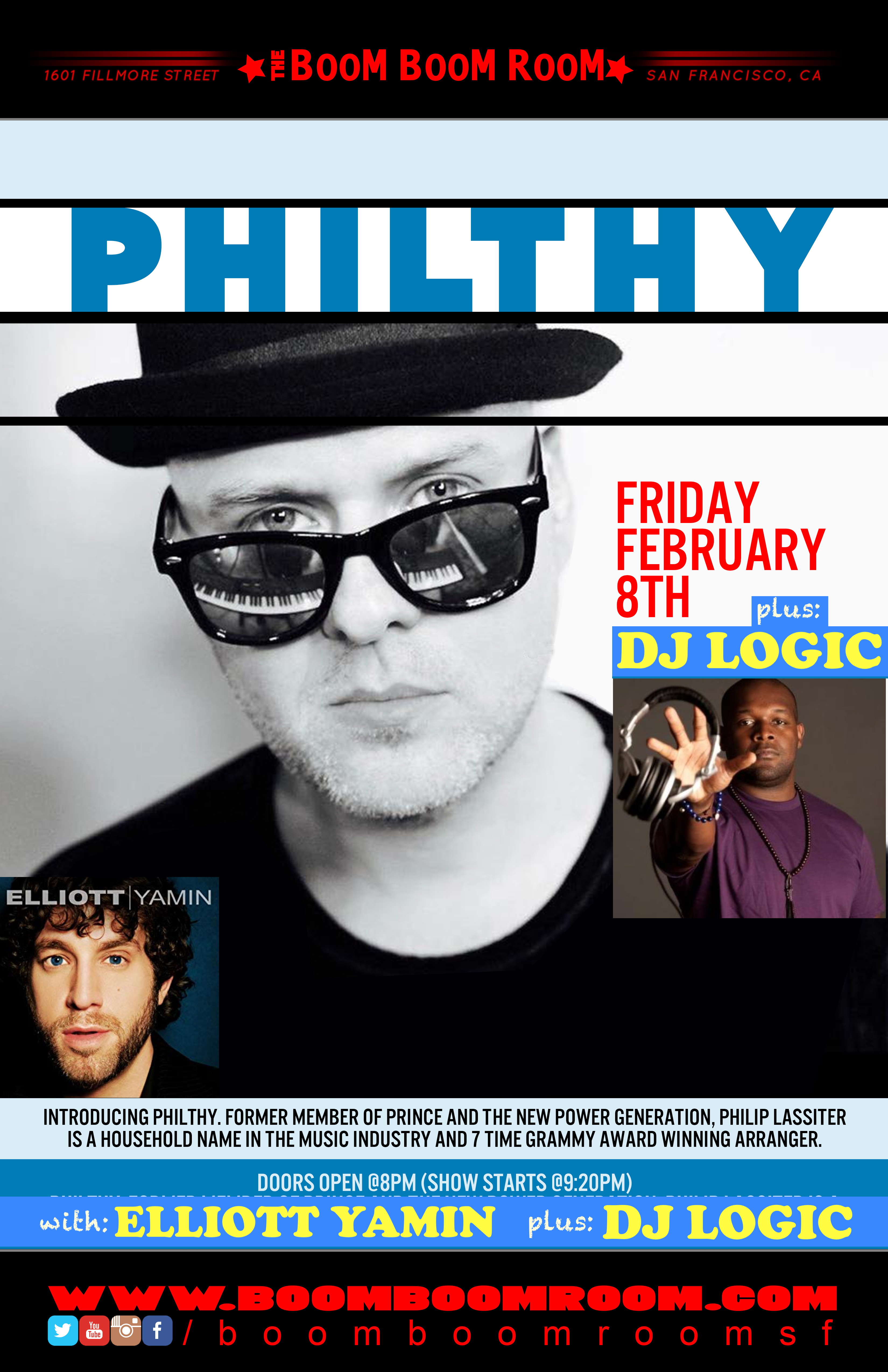 Super Funky Phenomenal Band from LA ..This is going to be an awesome lineup! They have been packing the BBR at their shows, and NOW they are back on Friday Night EXCLUSIVE SHO.  Hurry up and get your TIX now.

Introducing PHILTHY.Former member of Prince and the NewPower Generation, Philip Lassiter is a household name inthe music industry and 7 time Grammyaward winning arranger. To attempt to truly define the bombastic brillianceof this jazz trumpeter turned singer-songwriter would be like trying to catch abear with a mousetrap. A multi-faceted, multi-instrumentalist, Philthy’s pianois his pulpit as he commands the stage with the bravado of a revolutionary.With the best backing band in Los Angeles as his army, it’s an invasion of thesenses that leaves your body aching for more and your feet tapping the beat fordays to come.
Traversing America introduced Philthy to a cavalcade ofartists who would help shape his musical career. Aged 6 he unwittingly met hisfirst love – the piano – and began belting out Amazing Grace like no other kidin Mobile, Alabama. Being the son of a preacher – a man “who sweated everyounce until he was red in the face” – Philthy learned how to captivate anaudience and he’s taken that spirit on his own unique mission ever since.
Two decades of gospel, soul, R&B, funk, jazz and salsasounds were colliding ideas inside Philthy’s brilliantly twisted mind like atornado fighting a hurricane. 8 years in Dallas, TX were to bring theseinspirations to life, under the wing of some of the most talented cats on theplanet. Bernard Wright, Bobby Sparks, Keith Anderson and so many others messedup his mind in the best possible way, as his talents opened new doors in acrazy musical wonderland. As an arranger with multi-platinum artists includingKirk Franklin, Ariana Grande, Fantasia, Kelly Rowland, Jill Scott, FredHammond, Al Jarreau, Anthony Hamilton, Ledisi, Regina Belle and Timbaland, Philthy scooped 7 Grammy Awards andgained due respect as one of the premier horn section arrangers in thebusiness.
Philthy has been imbued with the soul of a musical saviour and themanic energy of a deliciously decadent devil. With the humor andlyrical flow of Slim Shady before the music biz ate him up, Philthycould be the lovechild of Andre 3000 and Aretha Franklin, with James Brownlaying down the blessing. He gives his life to bring music to yours.He’s been given a gift and wants you to share in it. This party’s just gettingstarted…
https://youtu.be/NuyFhp4ibVo

Efraym Elliott Yamin is an American singer known for his hit single “Wait for You” and for placing third on the fifth season of American Idol. His self-titled album, released March 20, 2007, debuted at number one on the Billboard Independent Albums chart and at number three on the Billboard 200

[of MMW and Project Logic]
“The theorem of turntablist as musician has been long proven in the capable hands of DJ LOGIC, whom with jazz as his foundation has become a wax innovator by crossing genres and mixing his sound across the map. As one of the world’s most accomplished turntablist’s, DJ LOGIC is widely credited for introducing jazz into the hip – hop realms and is considered by most as a highly respected session musician and an innovative bandleader.
Since his emergence in the early nineties amidst the Bronx hip-hop scene, the New York City based deejay has been amassing a veritable mountain of collaborations ranging from the likes of: MEDESKI MARTIN AND WOOD, CHRISTIAN MCBRIDE, VERNON REID, CHARLIE HUNTER, JACK DeJOHNETTE, JOHN MAYER, BEN HARPER, MOS DEF and THE ROOTS, to name but a few.

DJ LOGIC and his role as an electronic-music ambassador keeps him at the top of his game. Whether the scratch artist instructs tablas to flirt with drum ‘n’ bass (such as on his NINA SIMONE and BILLY HOLIDAY remixes found on Sony Legacy’s Remixed and Reimagined volumes) , or while meshing free styling MC’s with Afro-Cuban rhythms (such as on ‘Share Worldwide Funk’ – a remix produced for JACK DeJOHNETTE and Golden Beams Collected, Volume 1 ) , LOGIC can always be found paying homage to his predecessors while contributing his vision to the deejay genre. While the context of his work may vary, DJ LOGIC’S spinning skills are definitely beyond reproach. He works with a phenomenal roster of invited guests, and he knows how to pick his collaborators as well as his samples. With a growing catalogue of recordings under his belt, DJ LOGIC’S supreme musicianship and catholic tastes will allow him to journey wherever an infectious groove may take him.