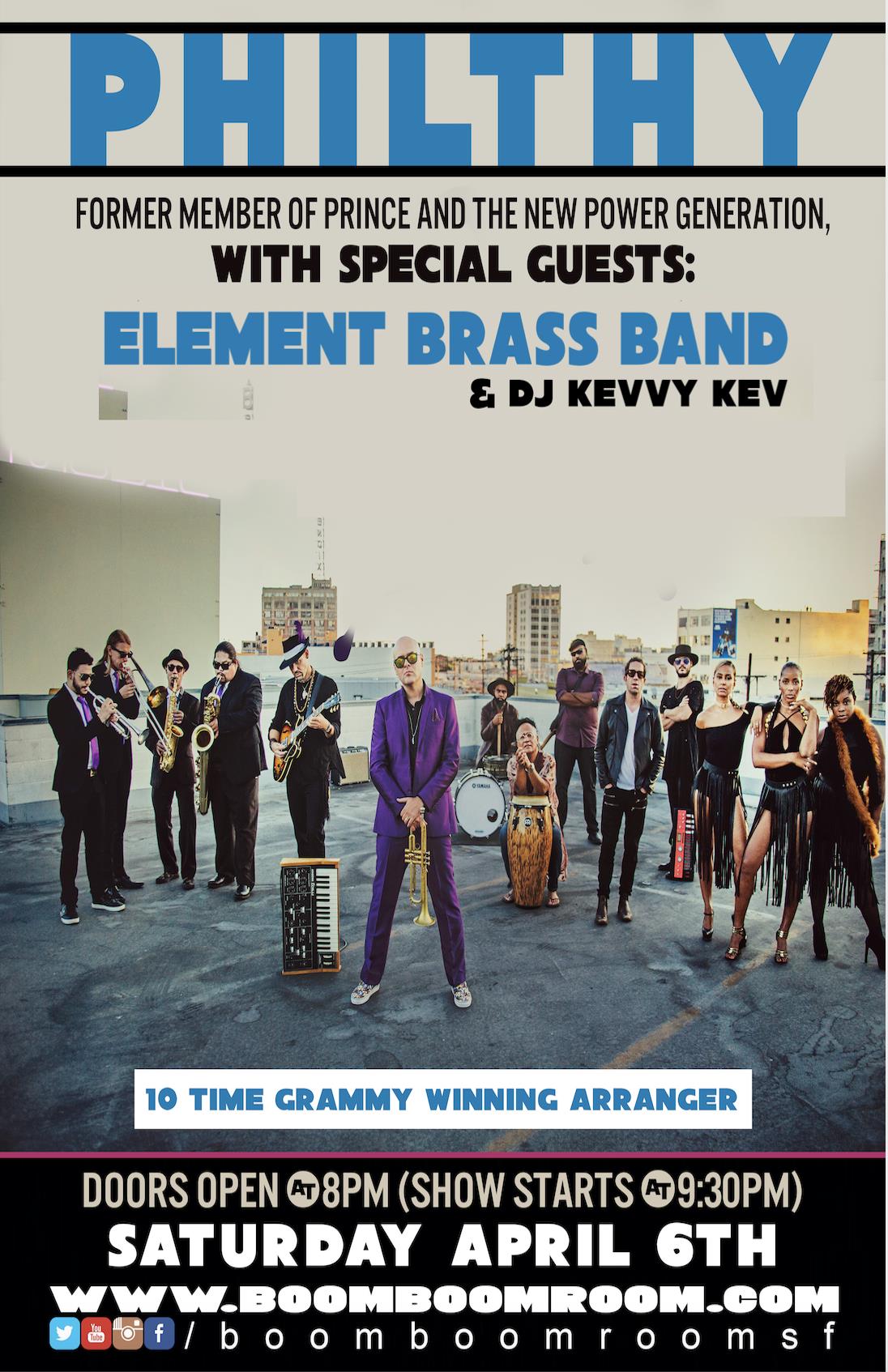 Super Funky Phenomenal Band from LA ..This is going to be an awesome lineup! They have been packing the BBR at their shows, and NOW they are BACK on Saturday Night for this EXCLUSIVE SHOW.  Hurry up and get your TIX now and get some electrification into your Saturday Night with PHILTHY.

[PRINCE and the New Power Generation BAND ~ 10 X Grammy Winner ~ Philip Lassiter is PHILTHY …An explosion of Original, Electrifying new music… think if P-Funk joined Prince and then add Memphis Soul with a bitchslap of disco-electro]

Former member of Prince and the New Power Generation, Philip Lassiter is a household name inthe music industry and 10 time Grammy Award Winning arranger. To attempt to truly define the bombastic brilliance of this jazz trumpeter turned singer-songwriter would be like trying to catch a bear with a mousetrap.

A multi-faceted, multi-instrumentalist, Philthy’s piano is his pulpit as he commands the stage with the bravado of a revolutionary.
With the best backing band in Los Angeles as his army, it’s an invasion of the senses that leaves your body aching for more and your feet tapping the beat for days to come.
Traversing America introduced Philthy to a cavalcade of artists who would help shape his musical career. Aged 6 he unwittingly met hisfirst love – the piano – and began belting out Amazing Grace like no other kidin Mobile, Alabama. Being the son of a preacher – a man “who sweated everyounce until he was red in the face” – Philthy learned how to captivate anaudience and he’s taken that spirit on his own unique mission ever since.
Two decades of gospel, soul, R&B, funk, jazz and salsa sounds were colliding ideas inside Philthy’s brilliantly twisted mind like a tornado fighting a hurricane. 8 years in Dallas, TX were to bring these inspirations to life, under the wing of some of the most talented cats on the planet. Bernard Wright, Bobby Sparks, Keith Anderson and so many others messed up his mind in the best possible way, as his talents opened new doors in a crazy musical wonderland. As an arranger with multi-platinum artists including Kirk Franklin, Ariana Grande, Fantasia, Kelly Rowland, Jill Scott, Fred Hammond, Al Jarreau, Anthony Hamilton, Ledisi, Regina Belle and Timbaland, Philthy scooped 7 Grammy Awards and gained due respect as one of the premier horn section arrangers in the business.
Philthy has been imbued with the soul of a musical saviour and the manic energy of a deliciously decadent devil. With the humor andlyrical flow of Slim Shady before the music biz ate him up, Philthy could be the love child of Andre 3000 and Aretha Franklin, with James Brown laying down the blessing. He gives his life to bring music to yours.He’s been given a gift and wants you to share in it. This party’s just getting started…
https://youtu.be/NuyFhp4ibVo

ELLIOTT YAMIN
Efraym Elliott Yamin is an American singer known for his hit single “Wait for You” and for placing third on the fifth season of American Idol. His self-titled album, released March 20, 2007, debuted at number one on the Billboard Independent Albums chart and at number three on the Billboard 200

ELEMENT BRASS BAND
Sacramento’s Element Brass Band will make you MOVE! E.B.B. are one of the premier bands on the West Coast for New Orleans Second Line. The band recently released their second album, “Cali Got A Brass Band” in the start of 2018. Element have toured New Orleans, New York City and Atlanta, and have performed at many venues including the High Sierra Music Festival, Guitarfish, the Fillmore, the New Parish, The Boom Boom Room, and Ace Of Spades. They have opened for GZA of the Wu-Tang Clan, Blackalicious, Andy Frasco, The California Honeydrops, Turkuaz, Big Sam’s Funky Nation, A Tribe Called Red, Angelo Moore of Fishbone, Jellybread, Katdelic, Wil Blades, Victor Little, DJ Logic, New Kingston and many others. E.B.B. have twice been given the accolade of ‘Best in Jazz’ at the Sacramento Music Awards, and their momentum shows no signs of slowing down!

DJ KEVVY KEV
on Decks and rockin the night keeping the flow between sets.  DJ Kevvy is da shnizzle of Hip Hop Rotc and of Wu-Tang