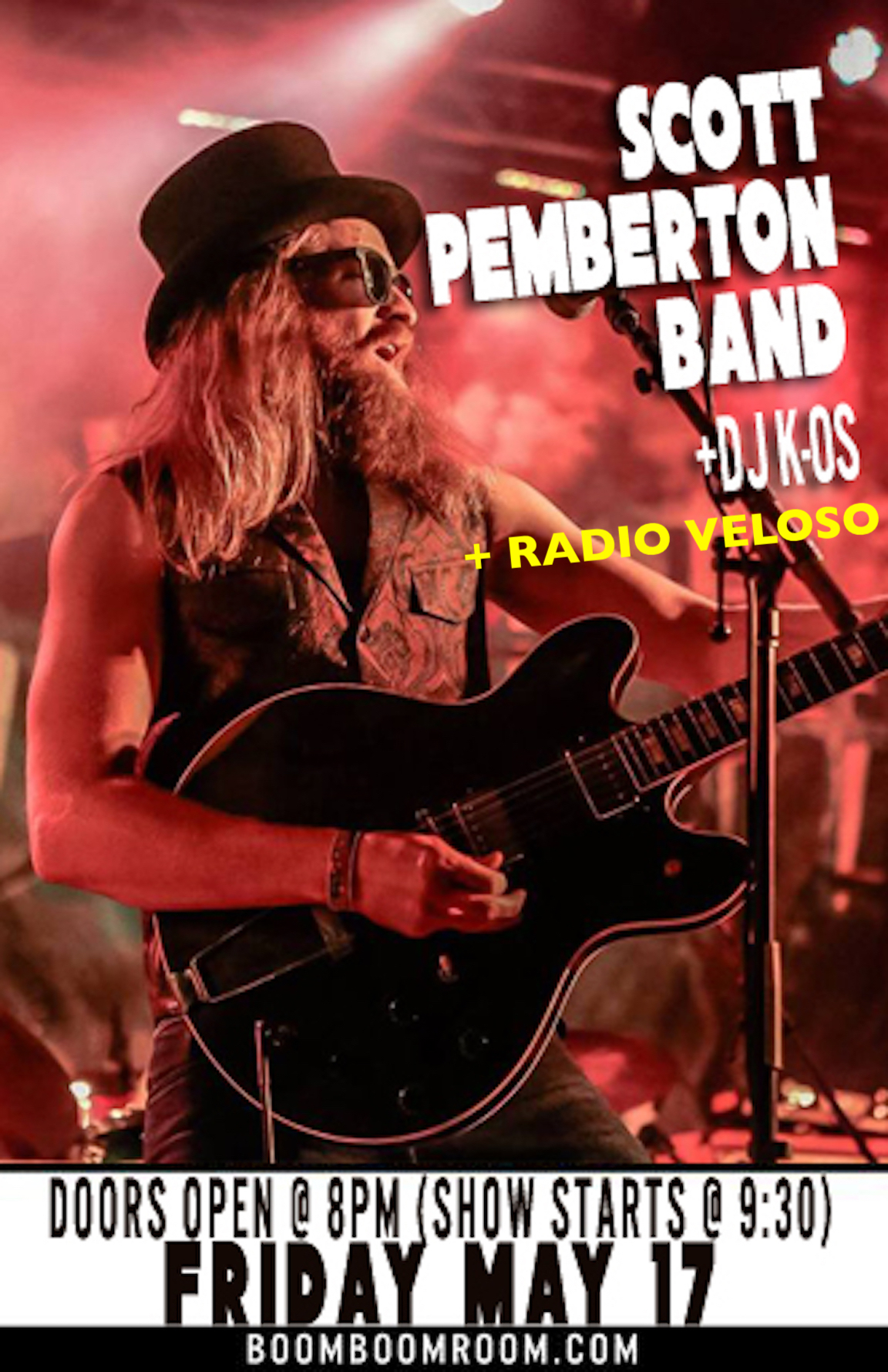 Scott Pemberton’s sound is much like the vibe of his native Portland:  freaky, fun and just the right amount of weird.  The best way to categorize his music is with the moniker “Timber Rock”.  Scott naturally applies his own lens/stamp to the sounds of the Pacific North West, the region he has always called home.  The deep jazz, NW rock/grunge, blues roots and the west coast funk.  It’s all there, and often all in the same song.   Listeners are finding this honest, original and to-the-point music refreshing and fun.

The response to Scott’s music has made him an emerging force on the festival circuit, placed him at #1 in Portland’s pop charts, #4 on Bilboards “Tastmakers” chart and has generated notice from the press:

“The Bruce Lee of Rock and Roll” –Tahoe Onstage
“A modern day Jimi Hendrix” –Chico Enterprise
“It’s not every day we get to see a real, live guitar god in action.” -Fly Magazine (Pennsylvania)
“A wildly creative virtuoso.” -Jambase.com
“Stand out artist at this year’s High Sierra Music Festival” –Relix Magazine.
“At a festival FULL of guitarists (Safeway Water Front Blues Festival), none played like Pemberton or was as fun to watch” -The Oregonian

The mastery of his guitar playing combined with the fun recklessness of his songwriting show that the rules of songwriting and playing the guitar no longer exist for him.  Scott plays with the uninhibited joy and intensity of someone who recognizes that every time we make music is an honor and a gift.

Many master guitarists find their homes within a specific genre, perfecting the ins and outs of their chosen musical realm until their names become synonymous with the very art form.

Portland’s Scott Pemberton is not your average guitarist. He’s a musical nomad. His home isn’t in one comfortable bubble, but rather spread across genres. One moment, he’s shredding through the blues. Then next, he’s living in a classic rock world, or drifting melodically through an ethereal psychedelic plane. Maybe he’s leading a dirty funk jam, or experimenting with something heavier, or sitting back on a jazz odyssey.

Regardless of genre, though, Pemberton’s musical journey is marked by two unmistakeable realities: You always know when you’re hearing a Scott Pemberton song. And you’re always going to be captivated.

A Portland native, Pemberton and his guitar have been inseparable since the musician was in his teens, and he quickly established himself as an integral to the city’s musical fabric, sitting in on studio sessions, becoming a fixture at jazz and rock clubs, and taking guitar teaching positions at Lewis & Clark College and Reed College at age 21. So much a part of Portland’s fabric is Pemberton that the city’s famous Voodoo Donutes gifted him a custom guitar-shaped donut for his birthday.

Beyond stages both local and international, his music has found its way into various movies, television programs and advertisements (Nike, Coke, Jaguar, and NASCAR ads have been propelled by his distinctive melodies), and his funky guitar work has led to collaborations with legendary drummers such as Motown’s Mel Brown and Bernard Purdie, AKA “the world’s most recorded drummer.” He’s played prime spots at major festivals across the U.S. and Canada, hit #4 on Billboard’s Tastemakers’ charts and ranked among the top performers on Jambase, peaking at #2 during the High Sierra Music Festival, where he stormed the stage.

Even more remarkable than Pemberton’s quick ascent to a superhero on the axe, though, is his second act. Most musicians are lucky to find their talent in the first place. For Pemberton, his love affair with his guitar received a rebirth following a bike accident that nearly ended his life and caused a traumatic brain injury, a life-changing event that would have grounded most artists. For Pemberton, it only fueled his musical drive. During rehabilitation, the guitarist rediscovered his gift, and emerged with a strong new vision as an artist.

Exploding back into the public consciousness stronger, sharper and more dedicated than ever, Pemberton released his eclectic debut, Sugar Mama, produced by Los Lobos sax player Steve Berlin and featuring a bevy of guest performers including legendary bluesman Curtis Saldago.  Amazingly, Sugar Mama manages the difficult task of capturing Pemberton’s wildly ambitious live persona, jackknifing across genres with ease, using the frontman’s intricate musicianship as a glue that holds it all together.

A master showman who draws amazed stares when audiences realize he’s shredding without a guitar strap, Pemberton’s unique musical gifts and infectiously positive attitude come exploding to life, making the axe man and his band’s legendary shows on stages small and large come vibrantly to life. The music is hypnotic in its infectiousness — consistently challenging listeners while grounding it all in a familiar foundation of rock. Music is Pemberton’s domain. The stage is his home. And his door is always open.

Scott’s path is simple and clear. Make the best music he can…. Share it with others…. That is all.

We combine hip-hop beats, heavy funk bass, Afrofunk guitar and low-fi horn lines. Modern groove music to bounce to.
We play instrumental groove/funk music on drums, bass, guitar, and trumpet.
We sound like Menahan Street Band, El Michels Affair, and Lettuce.
We recently released an EP of new original music.
We regularly play Amnesia and the Blacksmith Bar in Redwood City and have recently played The Independent and The Boom Boom Room.