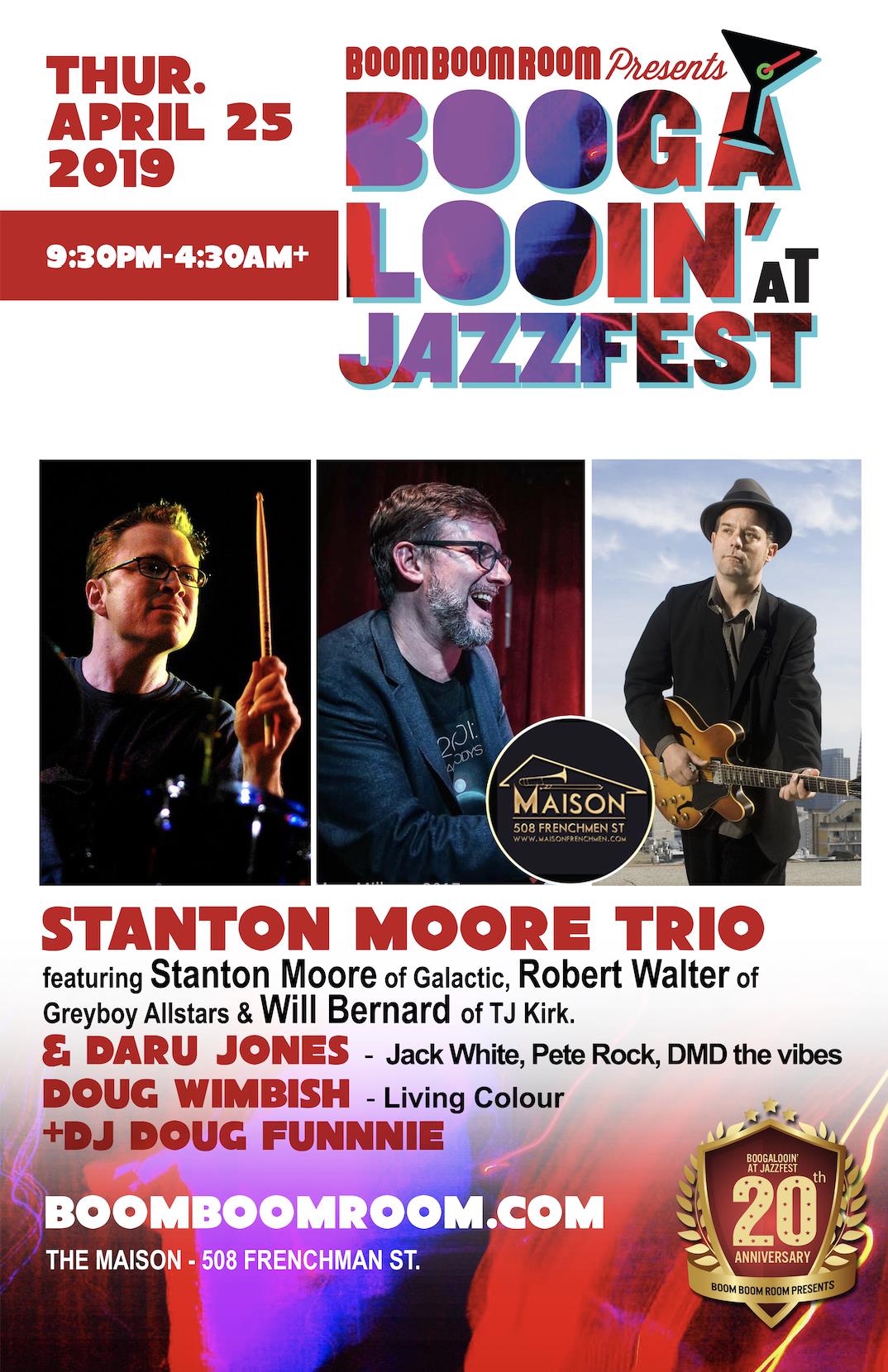 *at THE MAISON (New Orleans)

We have produced every Stanton Moore Trio show of the first week of Jazzfest since Stanton Moore Trio formed from another BBRP super group ‘Frequinox’…
This is a killin’ ‘KICK-OFF’ show to get your annual Jazzfest rollin’ in the best direction fo sho!
This is the ULTIMATE PARTY STARTER for Jazzfest every year.
Don’t miss it people!

“It’s voodoo of some kind the way Moore hammers out the beat of the first two tracks, “Squash Blossom” and “Pie Eyed Manc,” only to have them shape-shift into the fluid motion of Robert Walter’s organ and the quick flick of Will Bernard’s guitar.” (Doug Collete, All About Jazz)

STANTON MOORE
Born and raised in New Orleans, Stanton Moore is a dedicated drummer and performer especially connected to the city, its culture and collaborative spirit. Driven and inspired by the thriving music scene of his hometown which includes such greats as Professor Longhair, Doctor John and The Meters, Moore’s name is now mentioned amongst these Big Easy mainstays.
In the early ‘90s, Moore helped found the New Orleans-based essential funk band Galactic. Their first album, 1996’s widely acclaimed Coolin’ Off, led to an intense tour schedule of nearly 200 gigs a year for the next ten years. Building on their fan base by adding an esteemed list of all-star collaborations to the six albums that followed, Galactic continues to amass a worldwide audience via recording and touring globally. Moore launched his solo career in 1998 aided by eight-string guitar virtuoso Charlie Hunter and saxophonist Skerik (Les Claypool, John Scofield, Roger Waters). The group recorded All Kooked Out! featuring a handful of local New Orleans musicians as well.

ROBERT WALTER
Robert Walter performs all his own stunts. For 20 years, the San Diego native has been pulling drawbars and pushing the limits of the Hammond B3 organ. Walter helped form the the Greyboy Allstars in 1993 with Karl Denson, Elgin Park, Chris Stillwell, Zak Najor, and DJ Greyboy. Influenced by soul-jazz and funk records from the 1960s and 70s, the band juxtaposed jazz improvisation and dance music. They continue to record and perform to a committed fan base. The Greyboy Allstars also served as the band for Robert’s first solo record, Spirit of ’70 which also featured saxophonist and Miles Davis sideman Gary Bartz.

Although currently a New Yorker, guitarist Will Bernard‘s unique voice was formed for the most part from the rich cultural roots of the San Francisco Bay Area. Along the way he studied classical music, jazz, played in basements and coliseums, and absorbed the Bay Area Multi-Kultii, the New York downtown edge, and the loose funk of New Orleans. He has performed or recorded with Charlie Hunter, Stanton Moore, Robert Walter, John Medeski, Dr Lonnie Smith, Ben Sidran, Peter Apfelbaum, Jai Uttal, Tom Waits, Dr. John and a lot of other known and unknowns. Will can be seen working in a chameleon-like way to fit into his current habitat. His 2007 CD “Party Hats” as well as his 1997 collaborative project T.J. Kirk’s If Four Was One were both nominated for Grammys, and he is nominated yearly in Downbeat Magazine’s Critics Poll for “Best Rising Star” Guitar Player. Will is a regular fixture at New Orleans Jazz fest, Jam Cruise and other similar events, and has toured extensively in the US and Europe. Currently, Will performs with John Medeski’s Mad Skillet, Peter Apfelbaum’s Sparkler, Frequinox with Stanton Moore and Robert Walter, Pleasure Drones, Brian Charette’s Mighty Grinders, and the Will Bernard Trio and Quartet. Will’s 8th album as a leader, Out and About was released in 2016 on Posi-Tone Records.

* DOUG WIMBISH *
(Bass – LIVING COLOUR)
On December 22, 2000, Living Colour re-grouped for a one-off show at New York’s legendary CBGB’s. The dynamite show rekindled Doug, Vernon, Will and Corey’s desire to play together. A small tour of the West coast drew huge and enthusiastic crowds, launching them off for a string of dates in Europe, including the Montreux Jazz Festival. The summer of 2001 saw the group finishing their U.S. tour on the East Coast, highlighted by a memorable show in Central Park.

In 2002, after recording and touring the U.S. with Mos Def for his “Black Jack Johnson” album, Doug came back to New York City to record the album “Collideoscope” with Living Colour. Doug also co-wrote and played bass on a song that was written and produced by Kanye West and featured on the movie soundtrack for “Brown Sugar” starring Taye Diggs and Mos Def. The song reached Number 16on the Billboard Top 200 chart and Number 4 on R&B/Hip Hop chart. Doug also co-wrote a song called “The Jump Off,” for the “Italian Job” movie soundtrack also co-starring Mos Def.

Doug had several television appearances in 2004; Last Call with Carson Daily playing with Living Colour, and Jay Leno’s Tonight Show, Jimmy Kimmel Show and David Letterman with Emmy Award Nominee and rapper Mos Def. TackHead also reunited and played a string of dates in the U.S. and Europe. They played a string of dates in Europe and the US. Doug teamed up with Joe Palombo and John McCarthy of Rock House Method to release an instructional DVD, “New Dimensions for Bass.”Doug then produced guitarist McCarthy’s record “Drive” featuring Bernie Worrell, Will Calhoun, and Leo Nocentelli.

These past few years have kept Doug extremely busy. He has been producing, recording and touring with Living Colour, TackHead, Little Axe, Headfake, Mark Stewart & The Maffia, Czech gypsy funk band Gulo Car, and Brazilian singer Fernanda Porto among others. Continuing to bless the stage at festivals and venues around the world, Doug displays his mastery of blending music and technology to lay his explosive rhythms that move the masses.

2006 kicked off with Will Calhoun and Doug joining Lauryn Hill onstage for a private show, followed with intensive touring all over Europe and Canada with Little Axe. The band was invited to perform at Real World Record anniversary party where they jammed with Robert Plant and Peter Gabriel. Living Colour toured Europe fronted by Dug Pinnick, singer of legendary band, King’s X. Doug stepped out on his own for strings of gigs all over Europe, recording and producing various artists while putting the final touches on his long awaited 2nd solo record “CinemaSonics.”

2007 started with a new stars studded Wim-Bash at the NAMM (National Association of Music Merchants) convention in Anaheim California. An unusual twist recommended by sound engineer Doug Cook, had Doug joining former Nightwish vocal sensation Tarja Turunen to record her new album “My Winter Storm.” Doug then teamed back up Keith LeBlanc and Skip McDonald bringing European audiences Bernard Fowler’s “Friends with Privileges.” Then it was time for Doug to strike out on his own for his first solo tour, “The Doug Wimbish SoundSystem,” showcasing his astonishing showman qualities as a one-man act.

The yearly NAMM’s Wim-Bash set the tone for a frantically paced 2008, headlined by Living Colour, with guest’s artists George Lynch, The Gods of Love and John McCarthy. Almost immediately afterward, Doug went back out on tour with a score of Little Axe, TackHead, Living Colour and Tarja Turunen dates happening all over the world. A new Tack>>Head collection is scheduled for release following the recent re-issue of “Trippy Notes for Bass & Mixes” and the long anticipated solo album “CinemaSonics,” that is available right now on NovaSound Records. Retro Music Hall in Prague where Living Colour has been recorded at Sono Studio their 5th Album ‘The Chair in the Doorway’ hosted the release party for Doug’s new solo record and guests the whole band playing a few new songs from their upcoming studio effort…

Be sure to follow @boomboomroomsf to join the Facebook event, and find out more details on special guests, ticket contests, and more! SPREAD THE WORD!