THE CLEAN-UP + SOL DOC & THE OPTIMYSTICS 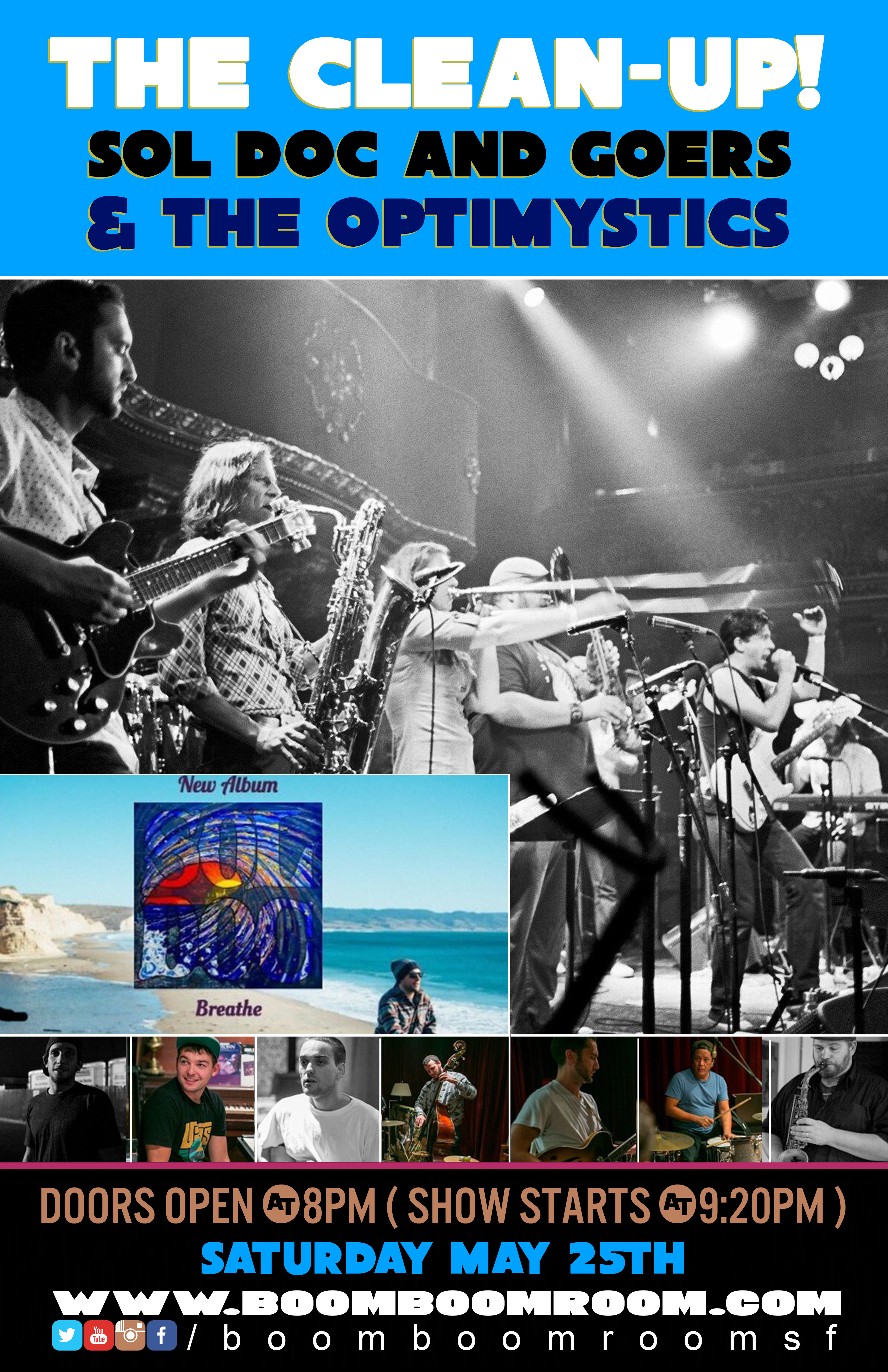 The thundering 11-piece Funk+Soul+Cumbia force that is THE CLEAN-UP! returns to SF, this time headlining the official release party for the piping hot and much anticipated new album by SOL DOC (ft. break-out Hip-Hop producer GOERS.).  A year in the making, it is finally here, and they have a special secret live set waiting ready to melt the souls of all who dare enter!! And YES! you read correctly… The always slick and soulful, pocket funkin’ 60’s groove juice group THE OPTIMYSTICS are on the hit and are primed and ready for a classic BBR throwdown!
See you ALL where there is NO other place to be ALIVE on May TWENTY FIVE.  SF’s legendary BOOM BOOM ROOM!
****ADVANCED TICKETS HIGHLY ADVISED, THIS WILL SELL OUT!!

The Clean-Up
is a 10 piece All Star Band of Bay Area performers, actively playing tight and punishing original Dance Funk, Chicha Cumbia, and Dub Soul and even tearing through 1950’s style Rock N Roll with stinging horns, tight and deep pocket drum and bass, (and washboard!), wailing Fender guitars, blazing percussion and a power house set of vocalists, all from the SF Bay Area. Originally founded in Oakland California in 2007 by lead singer and guitarist Gardner Goetze, this band not only was hailed as San Francisco’s Grand Slam Party Band for its first tenure from ‘07-2012, but had a significant backing band presence on stage and studio behind a heavy list of Reggae and Funk musicians.  Members split off to join their own bands and projects, but it has been put back together by Goetze once again, and this brand new incarnation is doubling down, Featuring members of Soul Ska, The Right Time, Vinyl, Sol Horizon, The Crooked Stuff, Pasto Seco and others. Come experience this unique Bay Area brand of funk, Soul, Latin, Dub, and Rock ‘n’ Roll.
The Clean Up is: Gardner Goetze, lead guitar vocals April Grisman, lead vocals Lex Razon, drums Tommy Omahony, bass guitar Aaron Saul, alto saxophone Kelsey Howard, trombone John Varn, keys Chris Peck, guitar Kevin Obrien, guitar David Eagle, percussion and washboard With a litany of special guest including Jonathan Korty, Giuseppe Pinto, Brandon Farmer, and many others!

Sol Doc and Goers
Sol Doc and Goers are a Hip Hop duo based out of the SF Bay Area, California. Sol Doc’s lyrics reflect his close ties with the land in which he was raised and his carefree yet conscious lifestyle. Growing up in West Marin surrounded by the rolling hills of Mt. Tamalpais and the curling waves of the coast you can take a walk into Sol Doc’s reality through the mindful lyrical content and positive messages he exhibits. Goers is a producer based out of Oakland but raised in Marin. He has been creating music for over a decade and has created his own little niche of California Hip Hop through mixing the Bay Area Hip Hop he was raised on and the styles of his producer icons Oddisee, 9thWonder, Black Milk and of course J Dilla. Alongside producing, Goers is a Sound Engineer and not only produced, but recorded and mixed the entire debut album by Sol Doc and Goers titled “Breathe”.

The Optimystics
Burst in the residual eddies the lingering essence of 1960 soul, The Optimystics consist of seven individuals committed to caring on this regions groove filled tradition.  The most recent record was recorded by Kelly Finnigan of Monophonics a Transistor Sound studios in San Rafael CA