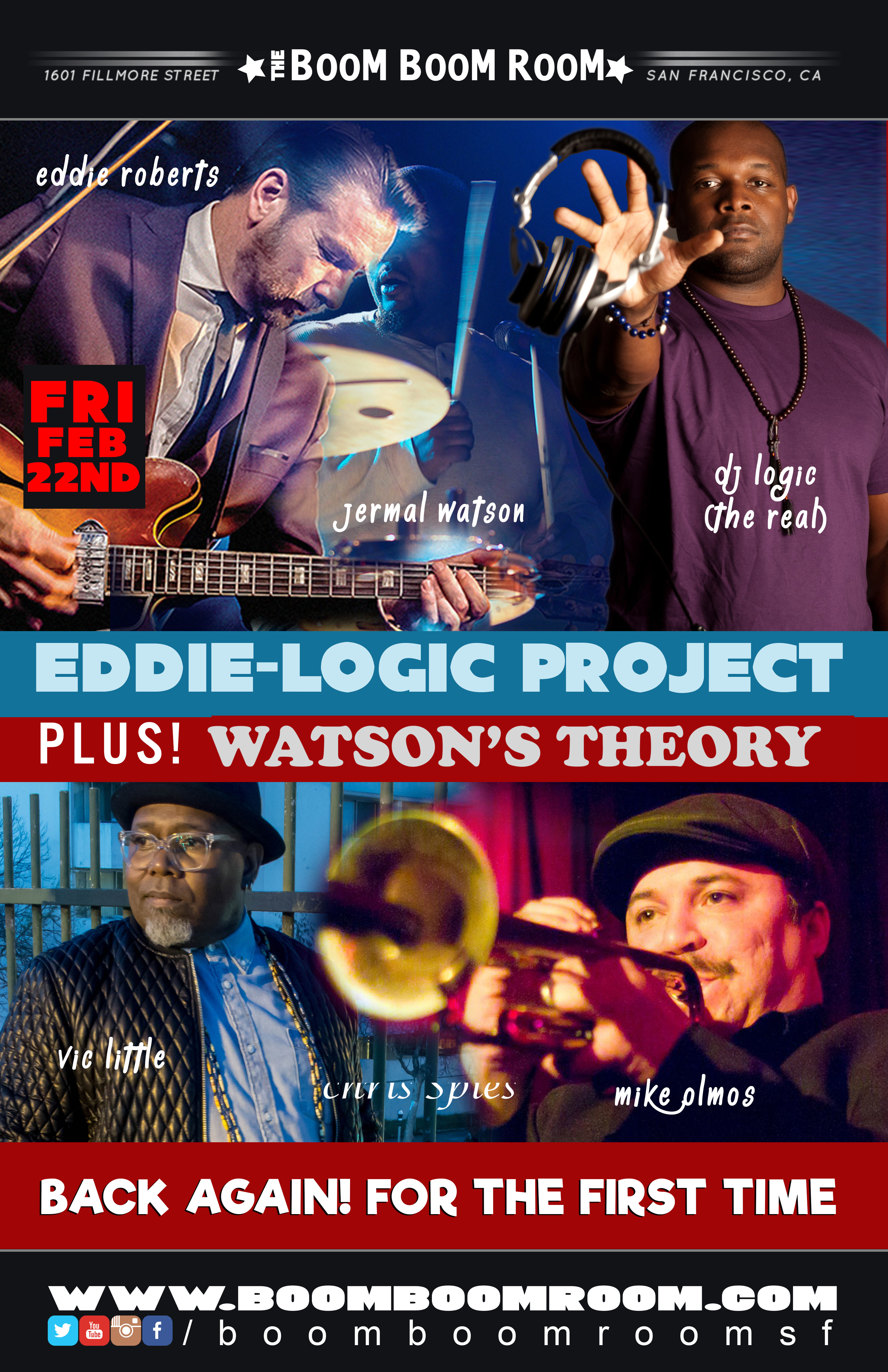 A stellar original band and All Star cast of playaz from New Mastersounds, MMW, Dirty Dozen, Honey Island Samp Band, Robert Walter’s 20th Congress are together at Boom Boom Room to light it up Funky…

Join us for an exclusive West Coast Weekend run with:

* The EDDIE-LOGIC Project *
This Friday night show continues with night two of epic exclusive weekend run of bad ass, epic Funk Stank Soul. This is the amazing super-group born of Boogaloo and features Eddie Roberts of the New Mastersounds joining forces with DJ Logic and an All Star band offunky musicians from New Orleans, New York, Colorado and SF. With Bass Monster, Victor Little of Robert Walter’s 20th Congress, Chris Spies on the Keys, Jermal Watson killin it on the drums and Mike Olmos on trumpet and fx… The Eddie-Logic Project is pure ecstatic revelry!
DJ Logic kicks in with party bumpin’, super grooves on the wheels of steel… One by one, the playaz join the DJ on the stage, the band ignites and builds a freight train of stanky groovin that drives this party to nonstop movin!

Get Here Early 9pm as We have the SF debut of New Orleans own:

Watson’s Theory is just that. Jermal Watson’s vision for his band, Watson’s Theory, is built upon the principle “It Takes A Village.” It takes a village of sounds, people, ideas, and collaborations formed in unity. Watson’s Theory’s members include Jermal Watson (drums), Kendrick Marshall (keys), Ari Teitel (guitar), Josh Hawkins (bass guitar, and many collabs. Much like hearing Jermal Watson play the drums for the first time, I sensed and experienced a spirit of unity, bright celebration, and innocence. Jermal Watson was born in New Orleans, La, with deep roots from the 9th Ward, the Westbank, and all the way down the road in Port Sulphur. Jermal considers God and family of the greatest value in his world.

Jermal, has been playing the drums since the age of 6. Jermal’s mother sang, and his father was a musician, it is no wonder that he had the desire himself. Playing in churches growing up, he developed discipline, a solid pocket, and a fire groove. Jermal Watson “doesn’t meet no strangers”, as they say in New Orleans. He is the drummer you want to know, and the drummer who knows everybody. “Watson’s Theory allows me to do what I love, variety, playing with friends, and everyone can be apart. Rehearsals are just to lay foundations and ideas, but the show is where the magic begins. It’s like gumbo, no weenies (chuckles).”
. Prior to the birth of Watson’s Theory, Jermal has been drummer/percussionist to many bands locally, nationally and internationally. Watson’s Theory’s Mantra is “ Don’t overthink it, fly where you desire, and have fun making music…together”