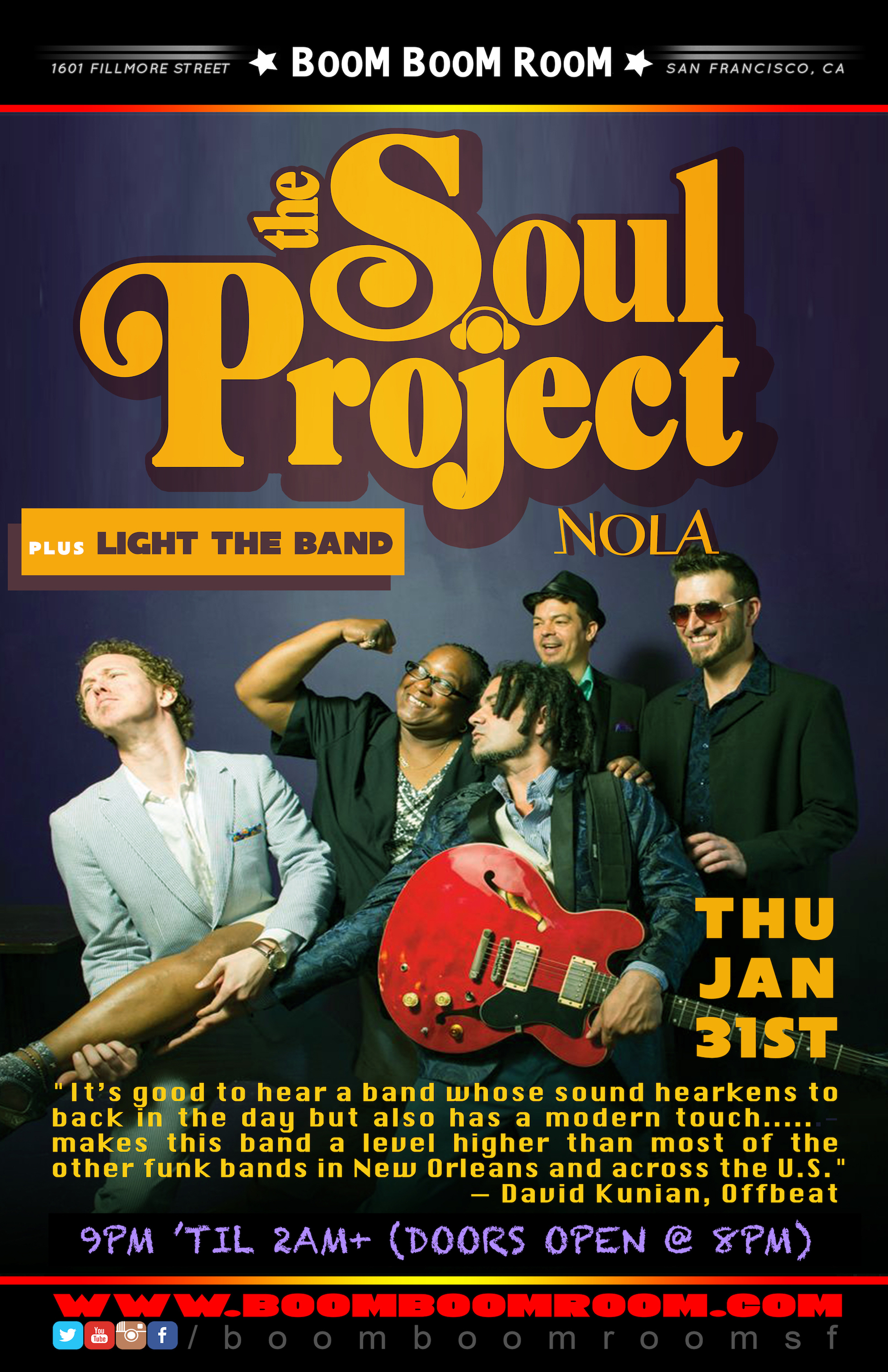 “… these cats are cutting their own groove, shaking the walls and earning their place among the torchbearers of New Orleans funk.”

With soulful grooves and impeccable musicianship, The Soul Project  brings the vibrant spirit of New Orleans everywhere they go.  Crowds can’t help but “let loose” to their energetic and original mix of Funk, Jazz, Soul, Blues, and Gospel.

And after 4 long years of hustling,  the self-proclaimed ambassadors of funk have released “The Long Hustle”, the follow-up album to their 2013 Offbeat Magazine’s  “Best Of The Beat” nominated debut album, “Music For Movers & Shakers.” The release, the first on the Soul Universal Productions label, represents not only the last 4 years of hard work and constant playing, but the complete journey of the Soul Project from its inception in 2001 until the present.  With some retooled tracks [like Celia, Down By The Riverside and What’s the Meter (With You)] that have finally been realized in their intended form, to brand new offerings (What We Got, BedBugs, Spotlight),  compositions from saxophonist David Ludman (Blue Snail) and Jeremy Habegger (Gsus), and the band’s New Orleans-inspired cover of The Beatles’ “Blackbird”,  this album has something for everybody.

Finding inspiration in the music of the masters such as Walter “Wolfman” Washington, the Meters, the Neville Brothers and Galactic,the band has been concocting their own heady brew of funk in the great New Orleans tradition for over a decade. Long-standing residencies on world-renowned Frenchmen Street have enabled the band to hone their unique sound, while festival appearances (French Quarter Festival, Jazz in thePark) and regular tours have allowed them to share their music with a wider audience.

WHAT PEOPLE ARE SAYING…

“Though they proclaim themselves to be funksters, and they are definitely funky, old school New Orleans R&B runs through their music like blood runs through veins.”
– Jay Mazza, The Vinyl District (Feb 23, 2018)

“…a solid, well-produced album from a really tight band.”
“..they’ve mixed elements of jazz ,funk, soul, blues, reggae and gospel to create an album with many facets under a cohesive groove.”
-Stacey Leigh Bridewell, Offbeat (Apr 23, 2018 )

“It’s good to hear a band whose sound hearkens to back in the day but also has a modern touch……makes this band a level higher than most of the other funk bands in New Orleans and across the U.S.”
– David Kunian, Offbeat

LIGHT THE BAND
The roots of Light the Band’s music come from aseries of jam sessions between drummer Logan Tyler & guitarist Dan Guzmanin the fall of 2011. Intense, loud, powerful, frantic.  The duo would loopsamples while Logan played drums and Dan solo’d.  The chemistry was otherworldly, but due to work obligations, Logan moved to Monterey in 2012.  Logan ran into Dan at a 7 Come 11 show about a year later, and the 2 re-kindledtheir music flames, returning to Santa Cruz Rehearsal Studios where they firstmade vibrations…. The duo quickly sought out Santa Cruz bass legend JamesTashnick, and the first version of Light the Band was formed.  Their firstshow was played December 5th, 2013, at the Crepe Place.  In early 2014,Logan & Dan both joined legendary Santa Cruz funk band 7 Come 11, andtogether with Light the Band, perfected their art of high-energy jamming. Since creative differences led Logan & Dan to quit 7 Come 11 inSpring of 2015, Light the Band has become the main artistic output for the two. Guitarist and Singer/ Songwriter Tim Gan joined the group in January2015, and after Logan & Dan left 7C11, the band began to create their ownstyle of psychedelic funk.  Shortly after Tim joined the group, saxophoneplayer Christopher “Boa” Noonan began to also jam with the band. He remains a close friend and active honorarymember of Light, whenever hecan make it.  The band continued to tour and record as a 4 piece untilJune of 2016, when Santa Cruz keyboard legend Pat Blizinski joined the boys fora show at Bocci’s Cellar.  The chemistry was undeniable and Pat waswelcomed as the 5th member of the band almost immediately after. He solidifiedhis place after crushing shows at Boom Boom Room and Slim’s SF in July &August.  It’s this incredibly potent, gumbo type mix of  Dan’sblistering, out of this world solos, James’ commanding bass lines and earthshaking grooves, Tim’s ultra swank funk swagger, Pat’s heavenly Hammond blazingthrough the mix and Logan’s bomb-like pounding of the drums that give Light theBand their sound. Unfortunately, in June 2017, guitarist Tim Gan left the bandto pursue other musical projects. Now a 4 piece again, the members all love themusic they create with their entire beings.  Each note radiates emotionsranging from pure bliss to down right terror.  Their music is powerful anddynamic, funky and real, psychedelic in the old-school way, and filled withlove.  There is literally nothing this band can’t do.  Talking Heads?Pfunk? Scofield? Nugent? The Meters? James Brown? They do it all, complete witha full arsenal of original music.  Light the Band is the next Santa Cruzlegend.  Be a part of history….