THE WHITE BLINDS [mbrs of Jungle Fire, Ozomatli] + THE M-TET 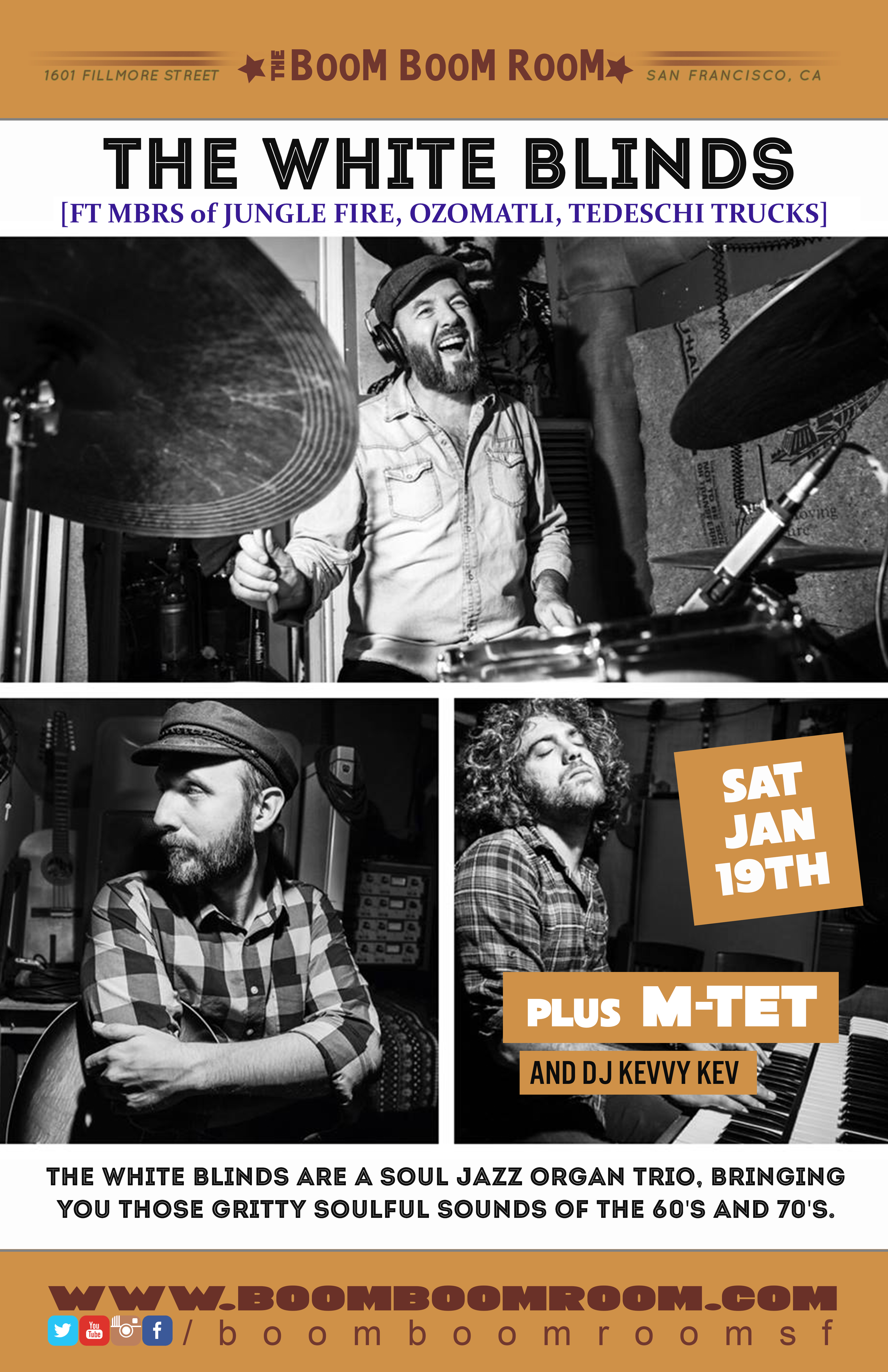 The White Blinds are a blistering hot Soul Jazz Organ Trio, Bringing you those gritty soulful sounds of the 60’s and 70’s.
Emerging from the tight-knit Los Angeles Funk and Soul community, The White Blinds are one of the newest true Organ Trios to carry the torch of instrumental music in the city of Angels.
The White Blinds pay homage to the classic soul jazz sound of the 60’s and 70’s with a splash of New Orleans groove and Afro-Funk overtones.
For lovers of Dr. Lonnie Smith, Charles Earland, and The City Champs, this trio led by drummer and percussionist Michael Duffy (Jungle Fire, Ozomatli), with Organist Carey Frank (Tedeschi Trucks), and Guitarist Matt Hornbeck, have come together to form a tight and soulful ensemble, filtered though the lens that is uniquely Los Angeles.
Their forthcoming debut LP “Get To Steppin” is out now on Southern California’s premier Soul, Jazz, and Funk vinyl record label, F-Spot Records. The album features ten songs consisting of nine originals and one take on the classic tune “Blue Juice” by Jimmy McGriff.

* THE M-TET *
Oakland’s Hammond-heavy instrumental quartet, The M-Tet, is quickly becoming Northern California’s go-to band. Having recently opened for Lee Fields & The Expressions, The Sugarman 3, Monophonics, and Matador! Soul Sounds (members of The New Mastersounds, Soulive, and Pimps Of Joytime), The M-Tet shows no sign of stopping.
Formed in the summer of 2012 with New Englander Joe Baer Magnant on Guitar, the North West’s Gary Pitman on Hammond Organ, and San Francisco Bay Area natives Chris Lujan on bass and Michael Reed on drums,
The M-Tet is a neck-deep study of late-60s organ-based R&B bands such as The Meters, Jimmy McGriff, and Booker T. & The MGs, as well as the modern soul heroes of today, Sharon Jones & The Dap-Kings, Charles Bradley, and Poets Of Rhythm. With their modern take on a classic sound, The M-Tet is just as much a dance party as a statement of how an old-school approach to raw, honest, unedited music is here to stay, with most of their music recorded live to tape.

Since their inception, The M-Tet has been releasing a string of smash 45s, collaborating with labels around the country, including Detroit’s Funk Night Records, San Jose’s Raza del Soul, Kansas City’s Sunflower Soul, and the East Bay’s Lugnut Brand Records. With another 45 on Funk Night Records, the Monophonics-run Transistor Sound label, and their upcoming sophomore album “Total Nonstop Action” scheduled to drop in 2018, their catalog is ever expanding.
In addition to playing at legendary San Francisco area venues such as The Great American Music Hall, Sweetwater Music Hall, The Mystic Theater in Petaluma, and the landmark Boom Boom Room, their upcoming dates expand across the country. With shows on the calendar in Boston, Detroit, New York, New Jersey, Chicago, Los Angeles, and high profile date at San Francisco’s SFJazz, 2018 is shaping up to be their biggest year yet.