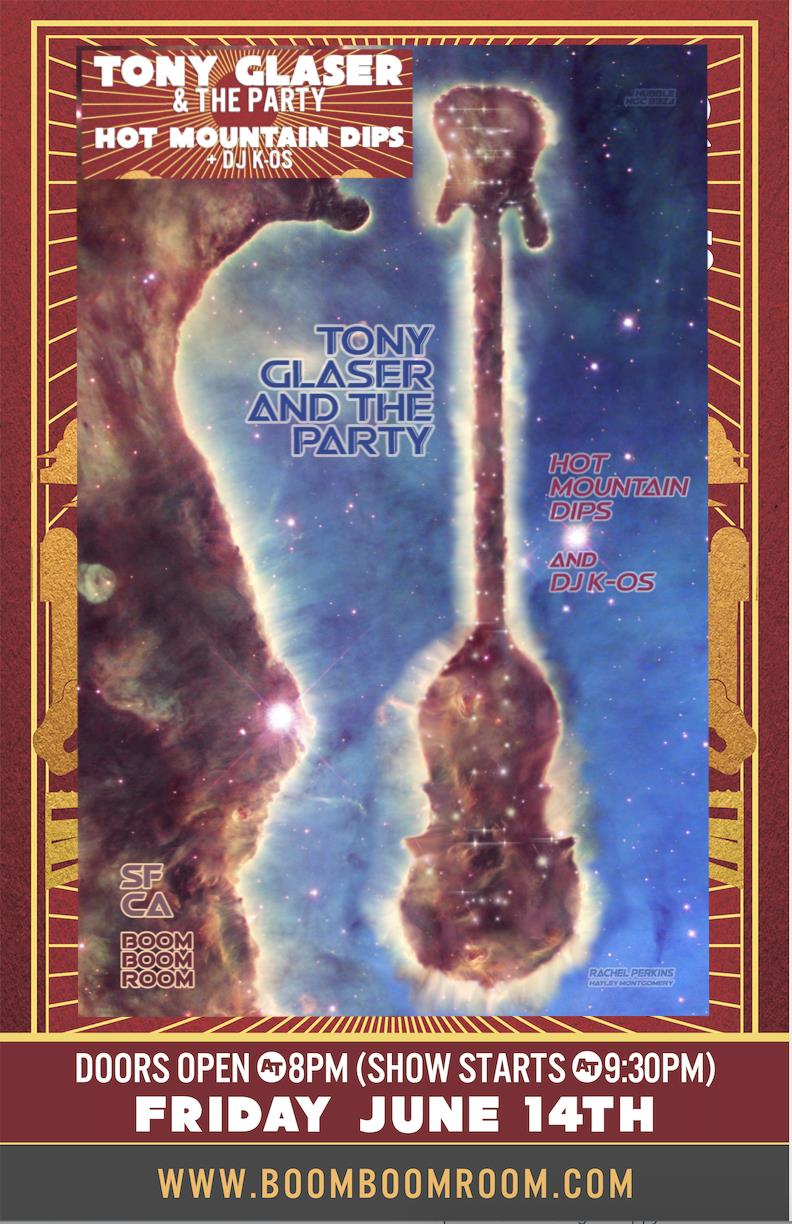 Join us at the BBR for this stellar Rockin, Dance-Happy, Live-Funky, Party bumpin Show on Friday Night featuring:

* TONY GLASER and THE PARTY *

plus:
* THE HOT MOUNTAIN DIPS *

TONY GLASER and THE PARTY are back in town to charge your earholes and tickle your eyeballs with their signature funk-dance-happy-rock-mutt-music all night at the infamous Boom Boom Room in San Francisco.

Joining the bill are local Haight-Ashbury heavyweights, The HOT MOUNTAIN DIPS, keeping the real Bay Area vibes alive. And kicking the night off and getting this party bumpin’ at 8:30pm and spinning k-osmic funk slop disco between band sets is Digital Underground’s DJ K-OS. This Show is gonna be the one to see and a true shake it hard, raise ’em up … stellar party all night.

For those of you not hip to the Boom Boom Room, be prepared to party all night long starting at 9:30pm in a 420 friendly room with drinks poured until 1:59am and music til 3am. Oh yeah, and they require ID and don’t allow backpacks, so don’t be “that guy”.

International touring and recording artist, Tony Glaser, is an electric and upright bass playing, high-energy frontman with an impressive knack for getting the audience to do his bidding. Fortunately, his bidding is for all to dance, smile, be in the moment, sing, rock out, and share a unique experience together. It is hard to stand still at his shows, since they are funky dance parties that totally rock, and rest assured he’ll find away to engage each and every person in the crowd.
His new full length album, Play My Game, releases in August 2019 and for the past year, thousands have come daily to watch his #morningbassline series on Instagram. It’s become bigger than he anticipated, and has been a nice outlet while he created the new album.

Based out of San Francisco and now living in Los Angeles, he has played all over the world. Some highlights include performing for the troops in Iraq, playing for orphans in Bali, getting funky in Tokyo clubs, guerrilla playing the Super Bowl and U.S. Capitol, rocking the upright bass with G.Love, and his band opening up for the Rock & Roll Hall of Famers, Cheap Trick.

“Tony Glaser’s bass is like a portable dance party, whether in a living room or on a stage, he starts to play, you want to dance.”
– BrokeAssStuart.com

The Hot Mountain Dips stay true to the classic San Francisco music scene providing free-form funkified blues with tasty grooves similar to the improvisation heavy bands of the 60’s and 70’s. The dips create a show atmosphere where heckling and “Hot Dips!” chants arealways recommended. Their originals have taken the bay-area by storm,blossoming from this particular union of friends and talent that dips deep down into that greasy loud rock and roll of generations past. Constantly striving to be atypical, the dips feature a lead vocalist on drums, harmonica tones not yet heard before, and ripping guitar and bass lines dipping through extended periods of improvisation.

As the most dipicated dippers and dipheads say, never miss the dips! So spread these dips to those in need, get ready for some true SF-born unhinged improvisation, and come GET YOUR DIPS -> hotmountaindips.com

Cosmic Funk Disco brought to you by the former DJ Star of Digital Underground.
DJ K-OS is set to light up the Boom Boom Room on Friday Night.
His music collection of rare and eclectic Funk, Psychedelic, Rock, Punk, Reggae, Disco, New Wave, Jump Boogie, Hip Hop, Soul and Disco is so extensive and obscure and bad azz.  The mash-ups of layers of sound and genre into dance-charged epic creations all his own, makes DJ K-OS not only a taste maker, but a musicologist extraordinaire. This is gonna be Hot!