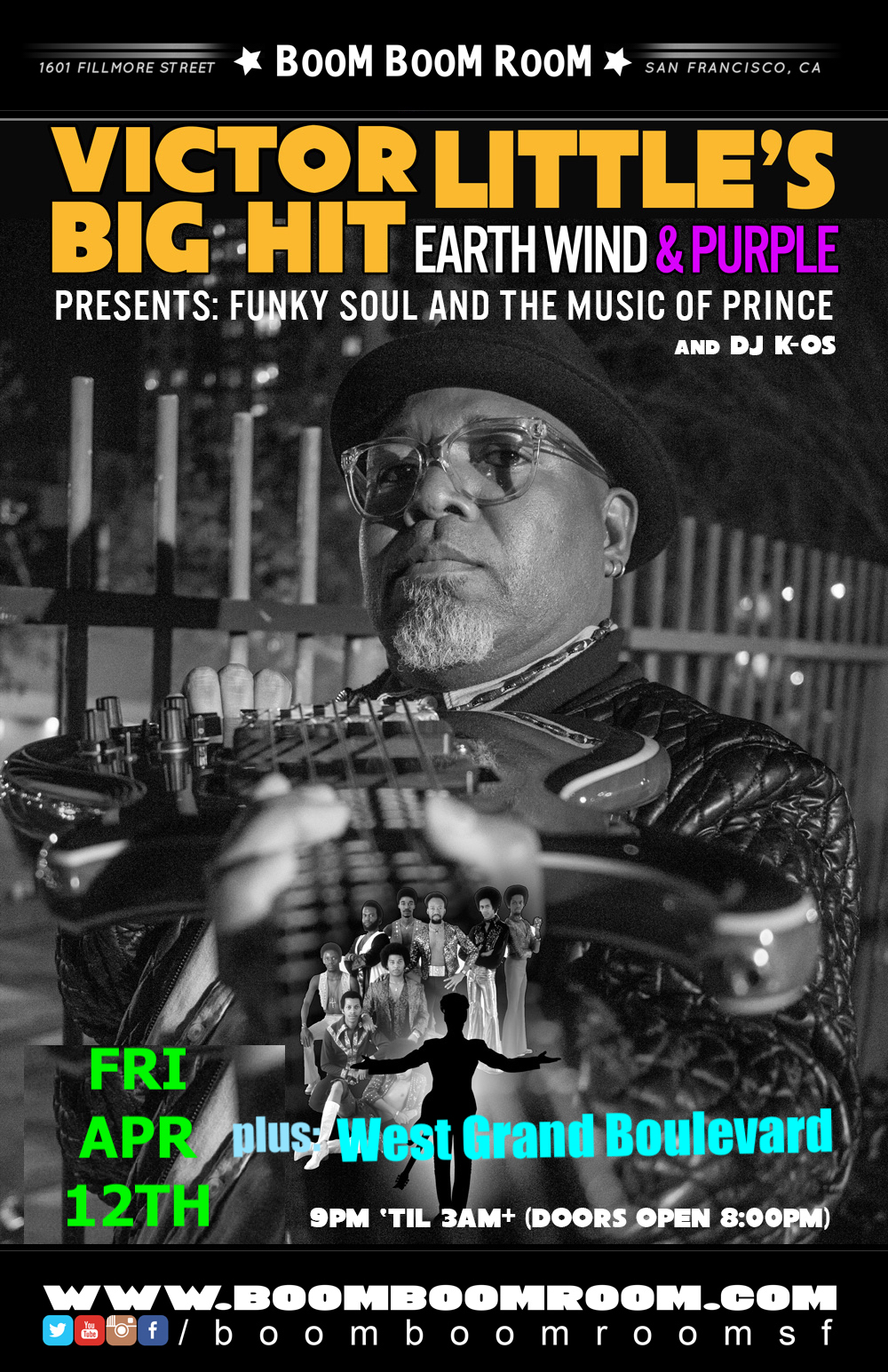 plus opening the night is:
* WEST GRAND BOULEVARD *

VICTOR LITTLE is a true Master of the Groove !
His genius of innovation and technique, diversity of styles, genre-blending and bending into exceptional and electrifying new music, has put a hot spotlight on Victor Little across the globe.   His talent has been described as “the most ‘under-the-radar’ musician ‘greats’ of our time” – Until now.  Victor Little is on international music radar.  Highly regarded worldwide by so many peers, musicians, producers, music listeners “in the know” and a huge and ever growing fanbase, Victor Little is a big hit!

VICTOR LITTLE’s BIG HIT is geared up to rock the house on Friday night at the Boom Boom Room.

Come check this out on Friday Night!

With a smokin’ hot band (featuring a line-up of bad azz playaz from legendary music greats around the bay area), Victor Little’s Big Hit is the “real (m-f’n) deal”!
Authentic and Legit, its an absolute BIG HIT!

LIFE’S A GROOVE…GET UP AND MOVE.
This tenet is the philosophy of spirit exemplified by music genius, groove master groundbreaker… bassist and producer extraordinaire:
VICTOR LITTLE.
With a vision and his mission to unite people through music and elevate us all in mind, body and soul, Victor Little takes it to another level altogether:  An ecstatic dance-charged, musical journey to all genres of the sonic world. Feel the vibrations, experience the sounds and shake your body. This is a master (or is he a magician) throwin’ down sophisticated  and exceptional music performances. Victor is passionate about creating and playing music that moves you. Victor lives and breathes music as demonstrated through his commitment as a writer, producer, consultant, recording and performing artist of original music in a career that has spanned over 20 years. “I’ve been blessed to collaborate with some of the most talented musicians and play on some of the most prestigious stages with world class artists and performers” says Victor, whose resume contains a long list of luminaries that includes Patti Austin, Billy Preston, Angela Bofill, Robert Walter, James Carter, Charlie Musselwhite, and Booker T. Jones to name a few… And the list goes on and on..  Come check out the cat musicians are raving about and audiences are lining up to see live.  Victor Little is a Big Hit!

plus opening the night is:

Sweet soul music for your body, mind & heart, made with love, by West Grand Blvd. Feel the classic grooves of Stevie, Aretha, Otis, Bill W, The Temps, & other greats energized through a live 7-piece ensemble. Established in the Bay Area in 2003, West Grand Blvd is now centralized in Oakland, California and features a rotating cast of funky & soulful local musicians.