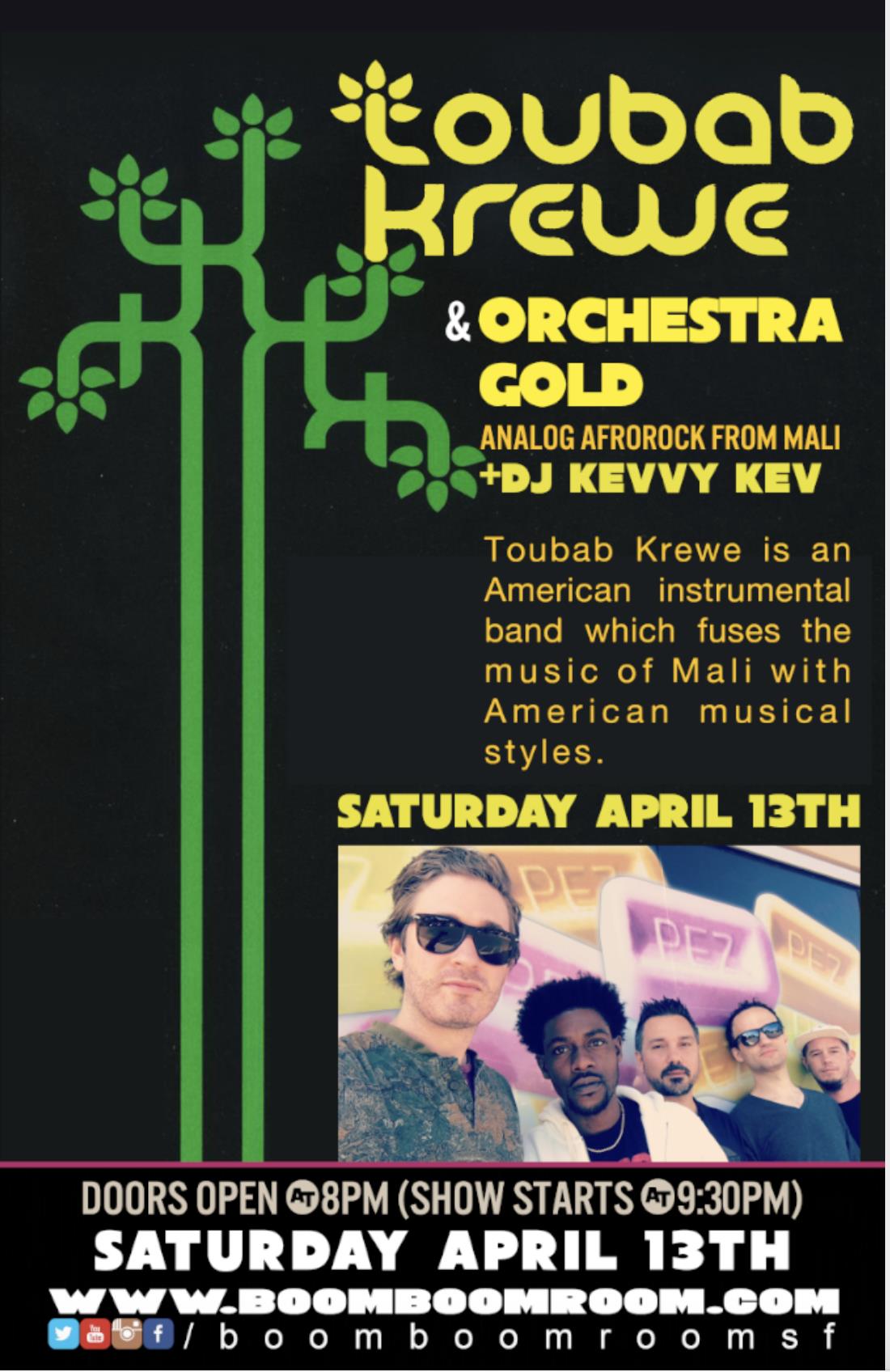 TOUBAB KREWE
Toubab carries echoes of African greats like Ali Farka Toure, Orchestra Baobab and Salif Keita, no doubt picked up during the group’s travels to study and live in Guinea, Ivory Coast and Mali.  But what truly differentiates Toubab Krewe from other Statesiders inspired by African music is how they innovate on what they’ve learned instead of simply recreating tradition. Toubab Krewe carves out a new trail honoring the African originators they admire by making something alive and contemporary.

Some music cannot be found on a map or within iTunes categories. Some music is so original it seems snatched from the great, invisible substrata that runs below all human activity, a sound aching to be born without a flag or fixed allegiance – free, questing, overflowing with immediate, tangible life. This is the music of Toubab Krewe, the vibrant Asheville, NC-based instrumental powerhouse that creates a sonic Pangaea that lustily swirls together rock, African traditions, jam sensibilities, international folk strains and more. While nearly impossible to put into any box, it takes only a few moments to realize in a very palpable way that one is face-to-face with a true original who recognizes no borders in a march towards a muscular, original, globally switched-on sound.

“Toubab Krewe has such a visceral, ear-yanking quality that in the band’s capable hands you just might find your definitions of what is/is not rock n’ roll and worldbeat being completely rewritten. This is the sound of liberation.”
– Blurt

“one of the most innovative voices in music today.”
– Honest Tune

Fronted by the charismatic Malian singer and dancer Mariam Diakité, Orchestra Gold (OG) plays an original stew of African – inspired rock and soul music. Drawing deeply on Mali’s musical history, OG blends analog, rhythmic dance music together with elements of psychedelic soul. With roots Malian drumming and the deep wisdom of Mariam’s vocals, OG moves audiences from the inside out.

“I am impressed at the delicate balance Mariam has struck between paying homage to the roots music of the ancestors, and looking to the future”
– Stephen Kent, Producer Music of the World KPFA Radio

“…the dynamo out front is Diakité, who has spent her life soaking up Malian traditions.”
– Andrew Gilbert, Music Journalist

“At a time when everything we do revolves around how technology will influence our future, it is refreshing to hear from musicians who want to preserve old sounds…and introduce them to a younger generation of music aficionados.”
– Azucena Rasilla, East Bay Express